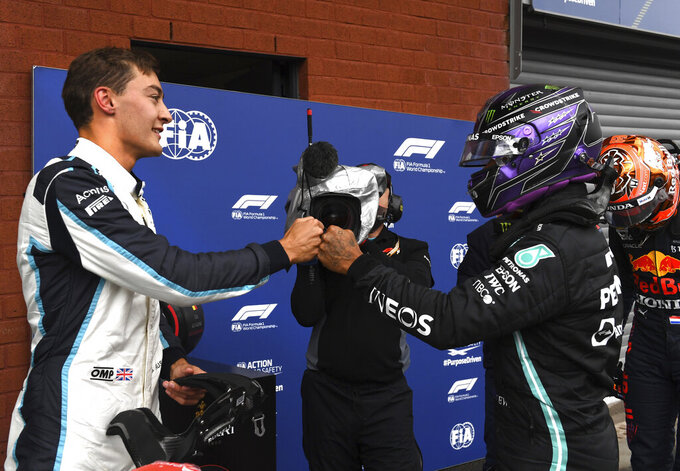 Second place Williams driver George Russell of Britain, left, fist bumps with third place Mercedes driver Lewis Hamilton of Britain after the qualification ahead of the Formula One Grand Prix at the Spa-Francorchamps racetrack in Spa, Belgium, Saturday, Aug. 28, 2021. The Belgian Formula One Grand Prix will take place on Sunday. (John Thys, Pool Photo via AP)

SPA-FRANCORCHAMPS, Belgium (AP) — Max Verstappen produced a brilliant last lap in the rain to take pole position for the Belgian Grand Prix and deny George Russell a stunning first career pole in Formula One on Saturday.

Hamilton had the leading time with drivers on their final runs. But Russell, driving a slower Williams, beat Hamilton's leading mark. Hamilton could not match it. But Verstappen found extra pace to cross the line .321 ahead of Russell and .334 clear of Hamilton.

Verstappen now leads Hamilton 6-3 for pole positions this season and is in a good position to claw back Hamilton's eight-point lead in the championship.

“That is simply lovely. Great start after the (midseason) break," Verstappen said. “It's a great track to drive but very challenging in the wet.”

Verstappen's ninth career pole was one of the toughest.

“All the qualifying was really tricky,” the Dutchman said. "There were problems with visibility.”

Russell is being touted as a possible Mercedes driver next year if the team does not renew Valtteri Bottas' contract and showed his talent with a fantastic lap.

“Conditions were changing every single lap. It was incredibly difficult out there," he said. “It was about pushing right to the limit but not pushing over. It was definitely a very good lap.”

“It’s been a very difficult day for everyone,” Hamilton said. “Well done to Max. Also, a great job by George.”

The seven-time F1 champion was again asked his opinion on who could drive alongside him next year at Mercedes.

“George has been doing a great job all year. He’s got pressure on him just as Valtteri has," Hamilton said. "It’s great to see him (Russell) delivering.”

Bottas qualified in eighth but starts a lowly 13th because of a five-place grid penalty for causing a crash at the Hungarian GP.

“Lando was looking incredibly quick, he had some great pace today," Hamilton said. “I hope he gets back on the road tomorrow.”

His crash delayed the end of qualifying for about 45 minutes.

When it resumed, there were nine minutes left.

“There’s still a lot of spray,” Hamilton said as he went out.

The start of qualifying itself had been put off by 12 minutes to 3:12 p.m. local time after pouring rain had drenched the 7-kilometer (4.3-mile) Spa-Francorchamps circuit for a couple of hours.

The track was still very wet and Williams driver Nicholas Latifi soon went off and into some grass. Hamilton also had a brief wobble on track in Q1 — the first part of qualifying — when he momentarily lost the rear of his car and slid to the left.

Norris topped Q1 ahead of Verstappen and Hamilton, with Alfa Romeo’s Kimi Raikonnen, the 2007 F1 champion, among the five drivers eliminated.

Norris led again in Q2, this time from Hamilton and Bottas. Both Ferraris were eliminated on a disappointing afternoon for Charles Leclerc and his teammate Carlos Sainz Jr.

The umbrellas came back out again as heavy rain returned for Q3, the final part of qualifying.

“I think they should red flag (halt the session), too much water,” Aston Martin driver Sebastian Vettel said on team radio.

Norris expressed concern, too, and moments later he was spinning off track into a tire wall at the notorious Eau Rouge section of the track. Both ends of the McLaren were mangled and the red flag came out with nine minutes left in the session.

In a show of solidarity, Vettel stopped alongside Norris’ car and raised a thumb to check if he was fine. Norris, who had the fastest time in Q3 before he spun, clutched his arm as he walked out but otherwise seemed unharmed.

Moments later, Norris lost control and spun several times, prompting a red flag as the wreck of his battered McLaren was lifted off track by a crane.

“Yeah, well. What did I say? What did I say? Red flag!” an angry Vettel shouted, using an expletive to underline his frustration that the session was allowed to continue. “(It’s) unnecessary.”

Earlier Saturday, Verstappen led the third and final practice ahead of his teammate Sergio Perez, who signed a new one-year deal for next season, and Hamilton as rain fell persistently.

Hamilton is chasing a fifth win at the Belgian GP.