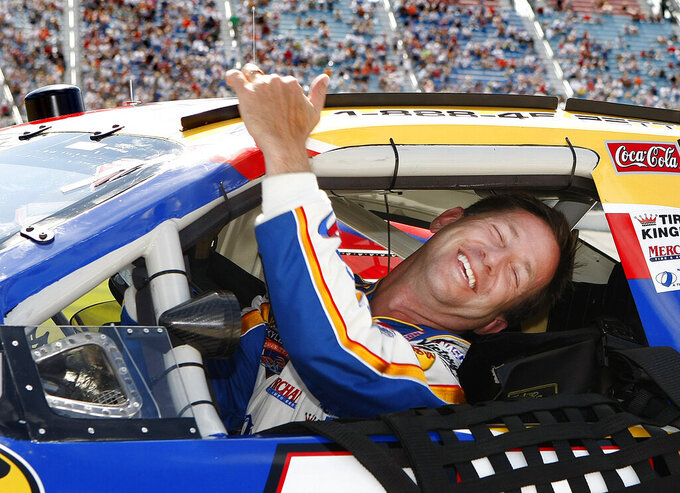 FILE - In this July 13, 2007, file photo, John Andretti smiles as he climbs from his car after qualifying for the NASCAR auto race at Chicagoland Speedway in Joliet, Ill. Andretti, a member of one of racing's most families, has died following a battle with colon cancer, according to a Twitter post from Andretti Autosports on Wednesday, Jan. 30, 2020. He was 56. (AP Photo/Warren Wimmer< File)

INDIANAPOLIS (AP) — John Andretti carved out his own niche in one of the world's most successful racing families.

He became the first driver to attempt the Memorial Day double. He won on dirt tracks, street courses and superspeedways. He won an endurance race, competed in dragsters and became an iron man in IndyCar and NASCAR. And he used his platform and passion for racing to help others.

On Thursday, after a three-year battle with colon cancer, Andretti died at the age of 56.

"He fought hard and stole back days the disease fought to take away," a statement from Andretti Autosport said. “He helped countless others undergo proper (colon) screening and in so doing, saved lives. We will forever carry with us John's genuine spirit of helping us first and himself second.”

The Pennsylvania native embraced the family business. John's father, Aldo, grew up racing and his uncle, Mario, became an international celebrity after winning the 1969 Indianapolis 500 and 1978 world championship.

Andretti's cousin, Michael, competed in Formula One and led more laps in the Indy 500 than any other race non-winner before turning team owner and winning the marquee race five times.

His nephew, Marco, Michael's son, finished second at Indy as a rookie in 2006 and has since posted four more top-five finishes at Indy.

Jarett Andretti, John's son, made his Indy debut just last May in Indy Lights. Jarett finished sixth in the race as he became the seventh member of the Andretti family to race at Indy.

“It’s very important for me, personally; me and John are very, very close, we’ve been close our whole lives, growing up together,” Michael Andretti, Jarett’s godfather, said in announcing the deal. “To help bring one of his dreams come true is very satisfying He’s always had a dream to see his son drive for Indy and I am glad we are making it a reality this year.”

The soft-spoken, genteel and popular John Andretti took a different tack in adding his chapter to the family legacy.

Andretti competed in USAC sprint cars on dirt then won the 1989 Rolex 24 in a sports car before moving full-time to IndyCars in 1990. There he started 49 consecutive races over the next three seasons, where his warm personality turned him into a fan favorite.

“We are devastated by the news that our dear friend, John Andretti, has passed away," IMSA President John Doonan said. “He was one of the most versatile racers ever, winning races in IndyCar and NASCAR and reaching the pinnacle of top fuel drag racing as well."

He moved to stock cars full time in 1994, making at least 29 starts each season through 2003 while driving for the likes of Richard Petty, Cale Yarborough, Dale Earnhardt and Richard Childress. Andretti also competed in the Xfinity and truck series.

Still, Andretti continued coming back to the Indianapolis, the venue that turned his family name into a worldwide sensation and that hosted impromptu family reunions each May.

In 1994, Andretti made history by becoming the first driver to compete in the Indianapolis 500 before flying to Charlotte, North Carolina, for NASCAR's 600-mile night race. Andretti finished 10th in Indyand wound up 36th at Charlotte, completing 220 of 400 laps before a bad crankshaft knocked him out.

“John Andretti embodied the spirit of a champion and inspired an entire fan base through his courageous battle with cancer," NASCAR President Steve Phelps said in a statement. “He was a fierce competitor throughout his life, and we are saddened by his passing.”

In 2007, John, Michael and Marco all started in Indy's traditional 33-car field.

He made 476 career starts on the Cup and IndyCar circuits, winning three times: The 1991 IndyCar season-opener at Australia, NASCAR’s second race at Daytona an 1997 and at Martinsville in 1999.

But as much as he enjoyed racing, he was equally passionate about his charity work.

“John Andretti was a great competitor and advocate for racing, but he was an even better person," Indiana Gov. Eric Holcomb wrote on Twitter. “He spent so much of his time focused on improving the world for others — all while fighting a horrible disease."

He became a key contributor in the Indianapolis community, annually racing go-karts to raise money for Riley Children’s Hospital, showing up at other fundraisers and even occasionally showing up at Pacers games.

But in 2017, Andretti was diagnosed with colon cancer and doctors later determined the disease had spread to his liver. And yet he still came to Indy that year to help educate others about the importance of colonoscopies, something he put off, through a social media campaign — #CheckIt4Andretti.

Later that year, Andretti announced the cancer returned and had spread to other parts of his body.

Andretti is survived by his wife, Nancy, son Jarett and daughter Olivia.

“Godspeed John Andretti. My first IndyCar teammate. A true racer and great human," former IndyCar driver and current team owner Bryan Herta wrote on Twitter. “I am heartbroken for Nancy, Jarett, Olivia, Amelia, and the entire Andretti family. I will miss your sense of humor the most."