Russia-Ukraine War: What to know on Day 8 of Russian assault 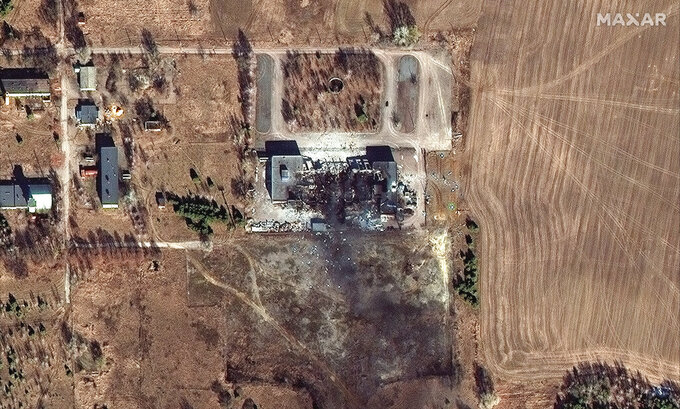 Russian forces pressed their war Thursday on Ukraine, seizing a strategic seaport and threatening to overtake a major energy hub even as the two sides met in Belarus for a second round of face-to-face discussions.

In a video address to the nation earlier in the day, Ukrainian President Volodymyr Zelenskyy called on Ukrainians to keep up their resistance as the war rages on for an eighth day.

“They will have no peace here,” Zelenskyy said, urging Russian soldiers to “go home.” His aide meanwhile called on compatriots to use guerrilla tactics against Russian forces, cut down trees and destroy rear columns of Russian troops.

Here’s a look at key things to know about the conflict:

WHERE DO NEGOTIATIONS STAND?

Another meeting by Ukrainian and Russian officials is taking place in Belarus, in the Brest region that borders Poland.

Ahead of the meeting, Russian Foreign Minister Sergey Lavrov told reporters in Moscow that Russia will press its military action until achieving its goals, chiefly the “demilitarization of Ukraine” but added that it will be up to Ukrainians to choose what government they should have.

Ukrainian negotiator David Arakhamiya said Kyiv’s main demand in the talks would be the establishment of humanitarian corridors so civilians can get out of combat zones and reach safety.

Ukraine is also seeking a cease-fire and an armistice, Presidential advisor Mykhailo Podolyak tweeted with a picture of the negotiating table.

Ukrainian Foreign Minister Dmytro Kuleba had said his country was ready for the talks, but noted Russia’s demands hadn’t changed and that he wouldn’t accept any ultimatums.

WHAT'S THE SITUATION ON THE GROUND?

The Russian military now says it controls Kherson, and local Ukrainian officials have confirmed that Russian forces have taken over local government headquarters in this Black Sea port of 280,000 people — the first major city to fall since the start of the war.

Ukrainian media reports said Russian troops had also entered the southern city of Enerhodar, a major energy hub on the Dnieper River that accounts for about one-quarter of the country’s power generation. It is the site of the Zaporizhzhia nuclear plant, the biggest in Europe. The mayor of Enerhodar said Ukrainian forces on the city's edges are battling the Russian troops.

Elsewhere, the Russians pressed their offensive on multiple fronts. Heavy fighting is also continuing on the outskirts of another strategic port city on the Azov Sea, Mariupol, plunging it into darkness, isolation and fear. Electricity and phone connections are largely down, and homes and shops are facing food and water shortages.

Overnight explosions heard by Associated Press reporters in the capital, Kyiv, were missiles being shot down by Ukraine’s air defense systems, according to the city’s mayor. Russia’s 40-mile-long (64-kilometer-long) convoy of tanks and other vehicles remains stalled outside Kyiv, which has been struck by deadly shelling.

WHAT HAS THE TOLL BEEN SO FAR?

The United Nations says that 1 million people have fled Ukraine since the Russian assault started. This amounts to more than 2% of Ukraine’s population, though some of those fleeing Ukraine are citizens of other countries.

The U.N. refugee agency has predicted that up to 4 million people could eventually leave Ukraine, a country with a population of 44 million.

The EU Commission says it will give temporary residence permits to refugees fleeing the violence and allow them to study and work in the 27-nation bloc. The move would need the approval of member states, which have already expressed broad support.

Russia has acknowledged that nearly 500 Russian troops have been killed in the fighting so far and around 1,600 have been wounded. Ukraine has not released similar casualty figures for its armed forces.

The U.N. human rights office says at least 227 civilians have been killed and 525 wounded in Ukraine since the start of the invasion on Feb. 24. Ukraine’s State Emergency Service has said more than 2,000 civilians have died, though it's impossible to verify the claim.

The U.N. General Assembly voted Wednesday to demand that Russia stop its offensive in Ukraine and withdraw all troops, with nations from world powers to tiny island states condemning Moscow. The vote was 141 to 5, with 35 abstentions.

Still, China has insisted it will continue trade with Russia and has refrained from criticizing the war in Ukraine. Hungary, meanwhile, said Thursday it will not allow any arms shipments bound for Ukraine to cross its territory.

U.N. Human Rights Council delegates will vote Friday on a resolution that would create a three-person panel of experts to monitor human rights and report on rights abuses and violations in Ukraine.

HOW ARE SANCTIONS IMPACTING RUSSIA?

The White House has announced additional sanctions against Russia and Belarus, including extending export controls that target Russian oil refining and entities supporting both countries’ militaries. The U.S. is also joining Europe and Canada in closing off its airspace to Russian airlines.

Additionally, Airbus and Boeing said they would cut off spare parts and technical support to the country’s airlines. The French-based Airbus and U.S.-based Boeing's aircraft account for the vast majority or Russia’s passenger fleet.

A growing number of the world’s best known brands — from Apple to Mercedes-Benz and BP — are to pull out of a country that’s become a global outcast. German Volkswagen Group decided to halt all its business activities in Russia, including that of subsidiary Skoda Auto, which is halting car production in its two Russian plants and all exports to Russia.

Similarly, Swedish furniture retailer Ikea says it is closing its operations in Russia, pausing all export and import in and out of Russia and Belarus, a decision that will have ”a direct impact on 15,000 IKEA co-workers.”

HOW ARE RUSSIANS BEING AFFECTED?

The sanctions threaten ultra-wealthy Russians who own properties across Europe and send their children to elite European private schools. Some have begun, albeit tentatively, to speak out.

French authorities on Thursday said they seized a yacht linked to Igor Sechin, a Vladimir Putin ally who runs Russian oil giant Rosneft, as part of EU sanctions over Russia’s invasion of Ukraine.

Russian billionaire Roman Abramovich confirmed Wednesday he’s trying to sell the Premier League Chelsea soccer club, with a price tag of at least $2.5 billion floated. He said net proceeds from the sale will be donated to benefit all victims of the war in Ukraine.

Ordinary Russians are also feeling the impact of the sanctions, from payment systems that won’t operate and problems withdrawing cash to not being able to purchase certain items.

Formula One canceled the Russian Grand Prix in Sochi in September and canceled contract with race.

Russian and Belarusian athletes are now banned from the Paralympics Games for their countries’ roles in the war in Ukraine when the Games open Friday.

Follow the AP’s coverage of the war between Russia and Ukraine: https://apnews.com/hub/russia-ukraine