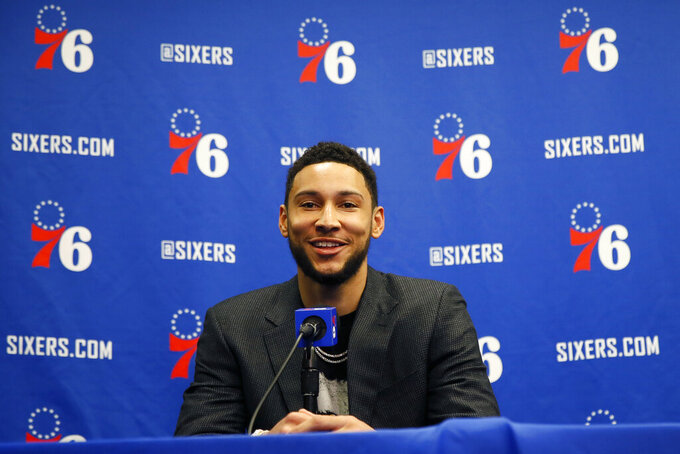 FILE - In this March 11, 2020, file photo, Philadelphia 76ers' Ben Simmons smiles while speaking at a news conference before an NBA basketball game against the Detroit Pistons in Philadelphia. Video games have become a go-to hobby for millions self-isolating around the world, and athletes from preps to pros have eagerly grabbed the controls. Stars like Ben Simmons and Luka Doncic have turned to gaming to stay connected with fans.(AP Photo/Matt Slocum, File)

Trevor May has been preparing for this.

Not precisely for a global pandemic that would bring sports — and so much else — to an unprecedented standstill. Even hours and hours of dystopian video games couldn't help foresee that.

But a break in the baseball schedule? That's something the Minnesota Twins reliever — and pro video game streamer — thought might happen eventually, considering the threat of a work stoppage in two years due to tensions between players and ownership.

"It was just something in the front of our minds — ‘OK, what would we do if weren’t able to play?’” May told The Associated Press on Sunday.

May’s solution if the games got called off? Game on.

Video gaming has become a go-to hobby for millions self-isolating around the globe, and titles old and new are getting unprecedented participation.

Call of Duty: Warzone debuted March 10 and attracted 30 million players in its first 10 days, and Animal Crossing became the most tweeted about game of 2020 with 3 million Twitter mentions in 24 hours after dropping Friday. In Italy, quarantined teens played so much Fortnite that it helped create a massive surge in bandwidth.

It’s no surprise that athletes — competitive by nature, mostly from Generations Y and Z, and almost all locked out of their arenas — are among the most eager to pick up the controls.

NBA players Ben Simmons, Devin Booker and Meyers Leonard have hosted live videos on Twitch, and Luka Doncic has said he may soon join them. Hockey players, race car drivers and more have also moved into the streaming space.

It’s been a seamless transition for May, who in addition to posting a 2.94 ERA for the Twins last year has also streamed for Luminosity since 2017, when he missed the baseball season following Tommy John surgery.

With baseball facing a potential work stoppage when its current collective bargaining agreement expires after the 2021 season, he has been laying groundwork to go full-time on Twitch anyway.

May is splitting time between Warzone and MLB The Show 20, which also became available last week. He plans to stream to his nearly 160,000 Twitch followers 6-8 hours each day, six days per week, at least until he’s able to reconnect with Twins teammates in person to renew preparations for a season delayed until at least mid-May.

His expertise has made him a go-to source for other major leaguers.

A few, including NL Rookie of the Year Pete Alonso of the New York Mets, have sought help setting up their own live streams. May created a YouTube instructional video to help wannabe streamers like Alonso get started.

May anticipates baseball players could start holding MLB The Show tournaments soon, similar to the simulated, televised races put on Sunday by NASCAR and Formula One. He hopes networks desperate for sports content will pick those up and help blur the lines between traditional sports fans and their esports counterparts.

“It’s a prime opportunity for that,” May said. “It’s a very scary situation, but anytime we’re forced to take time off from one thing we’re really focused on, there’s a silver lining, in my opinion.”

It’s happening further down the sports food chain, too.

Youth-level competitive video game organizers like the High School Esports League and All-Star Esports are seeing upticks in participation for their spring seasons after most varsity sports schedules were canceled. Students might not be able to meet up for baseball practice, but there's no such hurdles logging on from home to practice Super Smash Bros.

“Teachers, parents are all looking for ways to keep their kids engaged in a healthy way,” HSEL President and Chief Operating Officer Jason Kirby said. “Binging on video games, playing by yourself is usually, often frowned upon.

“But when you combine it with their peers and coaches, it takes gaming into a positive light and gives kids more of an opportunity to better engage and stay closer to their classmates and teachers.”

Even adult rec sports programs, like the NYC Metro Baseball League, are going digital with esports tournaments until they can get back on the field. HSEL has been fielding requests from rec leagues, youth groups and religious organizations.

Some other gaming initiatives of note to help athletes and sports fans pass the time:

— London-based soccer club Leyton Orient has organized a FIFA20 tournament featuring representatives from 128 real-life teams spanning 16 countries. Participants range from the Premier League’s Manchester City down to MLS’s Orlando City, and each club got to choose a player, employee or fan to play in the massive draw.

Sports books have even picked up on the event, with EFL club Sheffield Wednesday emerging as a favorite after the Owls landed a FIFA20 pro as their rep.

The 20-team Spanish League is launching a similar competition, and the popular, postponed Seville Derby between Betis and Sevilla was also staged online last week.

— The NBA's Phoenix Suns are playing out their regular season schedule via NBA2K streams. The first, pitting an Arizona-based influencer against a rep from the Mavs Gaming NBA2K League club, pulled in over 200,000 views.

“We were all really pleased with it,” said Suns social media manager Allison Harissis, who came up with the idea.

Suns guard Ty Jerome grabbed the controller for the next game and beat Minnesota Timberwolves forward Josh Okogie. Phoenix is trying to find matchups to fill out the rest of the season schedule.

— Virtual fitness has also picked up. Some are turning to workout apps like Aaptiv, and others are using at-home equipment like Peloton or Zwift. A number of cyclists, including 2018 Tour de France-winner Geraint Thomas, are participating in group races through computer generated scenery.