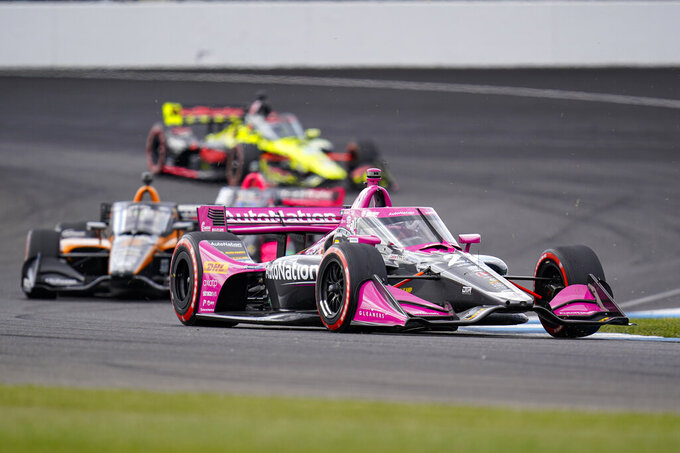 INDIANAPOLIS (AP) — Will Power counted down the laps Saturday, struggling to maneuver around the lapped cars in front of him.

At least once, he even pleaded with an old friend to let him by.

Eventually, Power managed to break free and then held off hard-charging Colton Herta by 0.8932 seconds to win the second Harvest GP race at Indianapolis this weekend.

“It was pretty intense because you had cars in front of you, that was the biggest problem," Power said. “As soon as I had a bit of a gap, it made it easier. I think we’re the only series in the world where lapped traffic actually races you. It’s insane."

Power had no complaints about his car, though.

He claimed his 61st career pole in qualifying, second all-time to Mario Andretti (67). He led all 75 laps, earning his first wire-to-wire win since 2011 at Barber Motorsports Park.

For most of the day, the gap between Power and those chasing him was at least five seconds and he was so strong Herta and third-place finisher Alexander Rossi, teammates with Andretti Autosport, acknowledged they weren't going to get past the 2014 IndyCar champ and 2018 Indianapolis 500 winner without a mistake.

“When you talk about the names, it’s amazing. These are people who are legends of the sport,” Power said. “I grew up watching these guys. I never imagined I’d hear my name mentioned with theirs.”

Newgarden, a two-time series winner, cut a 71-point gap to 40 by winning from the front row on Friday. On Saturday, he closed to 32 points by finishing fourth. Dixon, of New Zealand, finished eighth after damaging the underwing of his car early in the race.

“It was loose the whole race," said the five-time series champ, who drives for Chip Ganassi Racing. “We made contact with a couple of cars. I tried everything in that race. We were flat out."

While Dixon's closing stretch has been a challenge, the last of three trips to Indy this season couldn't have gone much better for team owner Roger Penske.

His drivers swept both races, producing his first wins since he bought the track from the Hulman-George family in January. They led 109 of 160 total laps and Newgarden still has a chance to keep his title.

It wasn't as easy as it looked, though.

Newgarden had to fend off Herta and Rossi on Friday and when Herta beat Rossi into the first turn with about 10 laps to go Saturday, it was a two-car duel.

Herta got as close as 0.5597 seconds with six laps to go, but once Helio Castroneves let the two cars past, Herta never got close enough to make a serious move.

“I just personally used up all my tires to catch back up with him," Herta said. “I think I was six, seven seconds back at the beginning of the stint. I was kind of hoping he would make a mistake, but I really knew I wasn’t going to catch him on pace."

Before qualifying, series officials announced they and some corporate partners would team to help expand the operations of NXG Youth Motorsports, an organization that introduces minority students to motorsports, with more than $500,000 in additional funding.

The group will be given a permanent garage at the speedway, brand new tools from Snap-on, and the money will help create a yearlong curriculum for students.

It's part of IndyCar's Race for Equality and Change initiative that was introduced earlier this year.

Mark Miles, president and CEO of Penske Entertainment Corp. which oversees the series, also announced Jimmie McMillian has been named chief diversity officer for IndyCar. He's been a senior corporate counsel for the speedway and the series since 2016.

Rossi. A rugged start knocked his season off track. But Rossi has rebounded with a late flourish that included a runner-up finish Friday and Saturday's third-place finish. He's made the podium in four straight races.

Dixon. He wanted to make the season finale less dramatic. Instead, he opened the door by qualifying 12th and 15th and finishing ninth and eighth at Indianapolis. While he still has a sizable advantage, the pressure will mount.