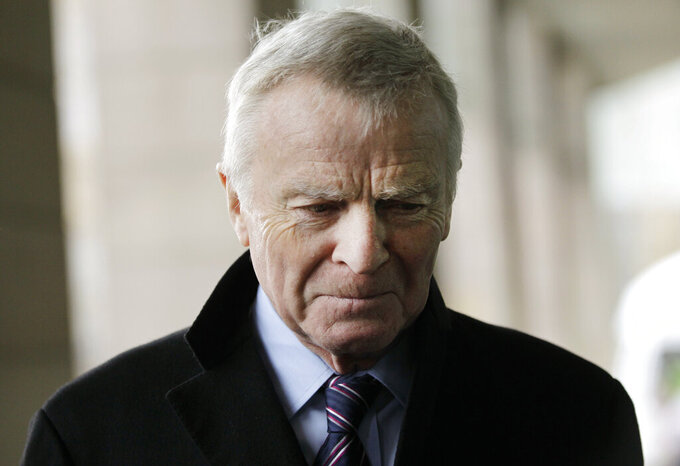 FILE - In this file photo dated Monday, Dec. 5, 2011, former Formula One chief Max Mosley arrives at a Select Committee hearing on privacy and injunctions, in London. Former Formula One boss and privacy campaigner Max Mosley has died on Sunday May 23, aged 81, it is announced Monday May 24, 2021. (AP Photo/Sang Tan, FILE)

LONDON (AP) — Max Mosley, who shook off the stigma of his family’s links to fascism to become international motorsport’s top administrator and later made a stand as a privacy campaigner in response to tabloid stories about his sex life, has died. He was 81.

Friend Bernie Ecclestone, the former F1 chief executive, said Monday that Mosley died the previous evening. He did not disclose the cause of death.

“He was like family to me. We were like brothers. I am pleased in a way because he suffered for too long,” Ecclestone said.

As president of motorsport’s governing body, the FIA, from 1993-2009, the suave, Oxford University-educated Briton oversaw the stunning global spread of Formula One, with new races in Asia and the Middle East.

But he was also in charge at the time of the tragic death of star driver Ayrton Senna in 1994, multiple scandals and furious squabbling within the sport about its astronomic costs and the distribution of its massive revenues.

Mosley said his greatest achievement was making the dangerous sport safer after the death of Senna, Brazil’s beloved three-time world champion. Noting that F1 teams were spending as much as US$1,200 for a single wheel nut, Mosley also fought to cap costs and give the gas-guzzling sport a greener image by introducing biofuel technology.

But his life and the final year of his four consecutive terms as FIA president were turned upside down in 2008 when the now-defunct News of the World published secretly filmed video of Mosley being whipped and engaging in sex acts in a London flat with five dominatrices, one wearing a German Luftwaffe jacket and another in a striped prison-style uniform.

“All my life, I have had hanging over me my antecedents, my parents, and the last thing I want to do in some sexual context is be reminded of it,” Mosley told London’s High Court that found in his favor against News of the World, ruling that it breached his privacy. The judge ordered the tabloid to pay 60,000 pounds in damages to Mosley plus hefty legal costs.

Mosley’s lawyer, James Price, said his client’s life was “devastated by the reports. The humiliation is of the highest order.”

Mosley told the BBC that he regretted the impact on his wife, Jean, and family, saying: “I can’t imagine anything worse than being the son of somebody and seeing those sorts of pictures in the newspaper.”

His son, Alexander, died from a drugs overdose in 2009, aged 39, and Mosley said the scandal could have contributed.

Mosley resisted calls for his resignation from the FIA and comfortably won a confidence vote to see out his fourth term as president, supported by 103 of its 169 member federations.

The London-born Mosley got into motor racing through his wife and raced for Brabham and Lotus in Formula Two.

Mosley helped set up March Engineering, which competed in Formula One in the 1970s, and used his lawyer’s training to make his way up motorsport’s administrative ladder. In 1993, he was elected unopposed as FIA president, replacing Frenchman Jean-Marie Balestre.

“I thought, ‘I’ve found a world where they don’t know about Oswald Mosley,’” Mosley explained in a magazine interview. “It has always been a bit like that in motor racing — nobody gives a darn.”

Mosley and Ecclestone, the multi-billionaire commercial brains behind F1’s global expansion, formed a duo that controlled both the business and regulatory sides of the sport, steering it through multiple sagas and protracted disagreements with teams over revenue distribution.

Under Mosley, the FIA’s World Motor Sports Council was ruthless with McLaren in the so-called “Spygate” scandal of 2007, hitting the team with a record $100-million fine and kicking it out of the manufacturers’ championship for obtaining secret technical data about the cars of rival Ferrari.

But the FIA let Michael Schumacher, the sport’s most marketable driver, escape without a ban or a fine in 1997 when the-then two-time world champion collided with Jacques Villeneuve in the season’s final race, in an apparently deliberate and ultimately unsuccessful attempt to stop the Canadian from winning the world championship. In a mild penalty, Schumacher was stripped of his runner’s-up finish in the championship and ordered to take part in an FIA “safe driving” campaign.

Mosley competed in the F2 race at Hockenheim in 1968 in which two-time world champion Jim Clark was killed, giving him first-hand experience of motorsport’s dangers. Safety was high on Mosley’s agenda at the FIA. He led a campaign that strengthened European crash-test standards and founded an F1 safety commission that focused on improving the safety of circuits.

France awarded Mosley its prestigious Legion of Honor award in 2006 for his contribution to road safety and motorsport.

The News of the World was shut down by owner Rupert Murdoch in 2011 after the revelation that in its quest for scoops it had intercepted the voicemails of celebrities, crime victims and members of the royal family.