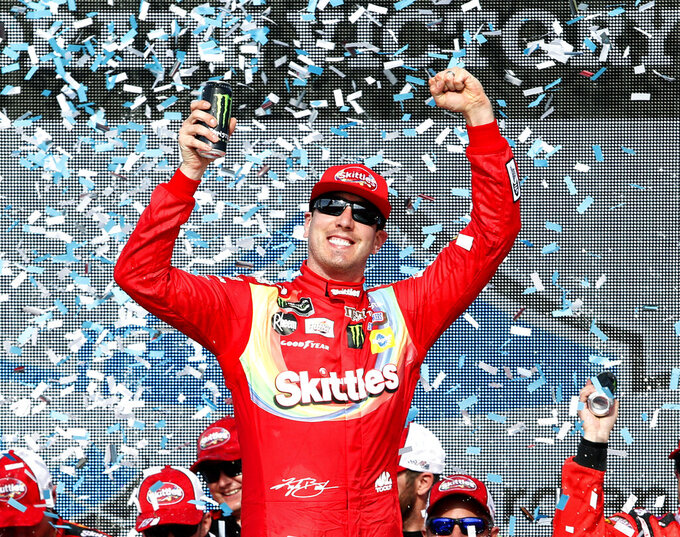 FONTANA, Calif. (AP) — If Kyle Busch earns his landmark 200th victory across NASCAR's three major series this weekend in Southern California, don't expect him to do much to celebrate the achievement.

"Maybe a hat or something in Victory Lane," Busch said Friday, his indifference obvious in his voice. "Other than that, we go on to the next one."

Although he has opinions about his place in NASCAR history, Busch will allow others to debate it after his victory odometer rolls over to zeros and he ties Richard Petty's career wins mark.

The 33-year-old Busch arrived at Fontana in no mood to do much reflection on a racing career still in its prime, even while others debate the significance of the list he is likely to top soon.

"It doesn't change anything," Busch said. "We're entered in both races (at Fontana). We come out here and try to do the best we can to win. If we win on Saturday and that's win 200, then so be it. I am certainly not going to sandbag a race or throw a race away to try to win 200 in a Cup race. That's not my way of going about things."

After he moved to the brink of the record by sweeping two races in Phoenix last weekend, Busch could tie Petty's mark as soon as Saturday in his dominant Xfinity Series car. With an additional win in the Cup race in his Joe Gibbs Racing Toyota on Sunday, he would be the winningest driver in NASCAR history.

Or not, depending on how you measure it, of course.

Petty's 200 victories all came at the Cup level, while Busch has 52 Cup wins.

Busch has spoken on it all before. He previously said he doesn't consider his wins to be equal to Petty's achievements solely on the top level, but he also realizes Petty didn't face the same level of competition in many of his Cup races as Busch faces every week.

What's clear is that Busch has cemented a place as one of the greatest drivers of his era, in any car and any series. Other experts believe he's one of the best of all time.

"I read what Richard said the other day, which was cool," Busch said. "He talked about how if I was thrown back in their era, with (David) Pearson and Petty, I could compete with those guys. That's very respectful, and I appreciate that. I am honored he said that. I feel I'd like to think the same way that I could do it. It doesn't matter. It's a different time and place."

Busch's success in the other two series will always be a part of his story, but he doesn't shy away from it.

Many drivers share the view of Denny Hamlin, who believes Busch couldn't reach his lofty marks in any racing circuit without a combination of outstanding cars and incredible talent.

"But I think he's extraordinary on the Cup level. I gauge myself (against) his accomplishments by what he does in the Cup series, and to me, he's the best out there. There's just no one better."

Busch is almost always good on the weathered asphalt east of Los Angeles, winning three Cup Series races — including the first of his career in 2005 — and six Xfinity races. He also has two Truck Series wins here, although the trucks aren't racing this weekend in Fontana.

If Busch wins on Sunday, he would join Jimmie Johnson, Jeff Gordon and Matt Kenseth as the only three-time winners at Fontana. Joe Gibbs Racing has only won two Cup races at the former California Speedway, both by Busch — in 2013 and 2014.

"I watched him when I was growing up, and he was dominating races then, and still is," 25-year-old Ryan Blaney said. "I feel like he is just getting better as years go on. I hear a lot of people giving grief of how he has just mainly won in Xfinity and Trucks. But yeah, he is deserving of it. It almost makes me mad how good he is. As a competitor, I don't like seeing him win. It frustrates me how he is able to find a way to be better than everybody else a lot of weekends."