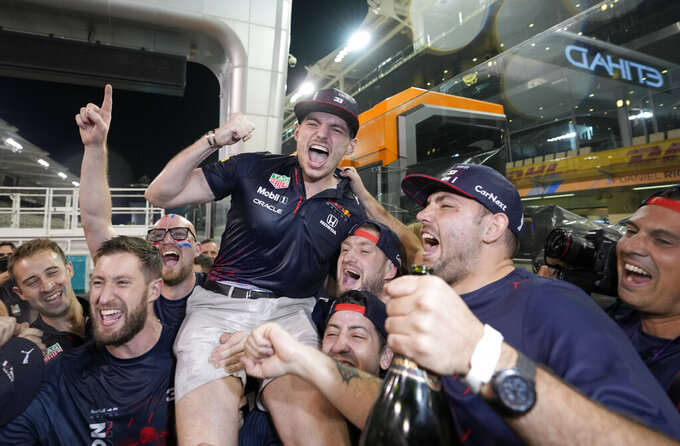 PARIS (AP) — Lewis Hamilton believes fans will be in for an unusual surprise when the Formula One season starts next weekend and he begins his quest to wrestle back the title he agonizingly lost to Max Verstappen on the last lap of the final race.

Hamilton is a seven-time F1 champion — six of them with Mercedes — but he has doubts over whether the W13 car is quick enough to win the first race in Bahrain, and maybe even several races after that.

“I think people will be surprised. It’s a bit different this year," the 37-year-old British driver said. “At the moment I don’t think we’ll be competing for wins.”

Hamilton insists this is not bluff or mind games, or that Mercedes is talking itself down deliberately while secretly holding something back to unleash on its rivals next Sunday in Sakhir.

“We have far bigger challenges this time and they’re not one-week turnarounds, I think it will take a little bit longer. From what I’ve been told we have a considerable amount of pace to find," a downbeat-sounding Hamilton said as preseason testing left F1's powerhouse team with more questions than answers. “We have some hurdles to overcome, and obviously next week we’ll get a much better showing of our pace.”

That's not the usual fighting talk from Hamilton, F1's record holder with 103 wins and 103 poles. He was within minutes of being F1's most successful driver ever with eight titles, until Verstappen's controversial victory in Abu Dhabi shredded that dream in seconds.

That was also the last race of a two-team era, dominated by Hamilton and Mercedes after Red Bull and Sebastian Vettel had enjoyed four years of joy.

But F1 wanted change, a more level playing field, more outsiders with a shot at success, less money for the big guns to keep dominating the also-rans, or the “midfield” as the humdrum term was coined.

So new regulations came in for this year.

“I think it’s one of the most exciting seasons we’ve ever embarked upon,” Hamilton said when preseason testing started three weeks ago. “Walking down the pit lane and seeing all the different cars.”

They are a bit heavier than before but overtaking could increase this season.

“They’re definitely a bit stiffer than before. I don’t mind it, the car’s quite enjoyable to drive," Verstappen said. "It seems like it’s a little bit easier to follow cars.”

Most drivers agree with that assessment.

Big rivals on the track last year, when they talked like boxing heavyweights before a weigh-in, Red Bull team principal Christian Horner and his Mercedes counterpart Toto Wolff both agree it's a serious issue.

“(You must) structure the company and organization in the right way to meet the cost cap at $140 million," Wolff said. “Also in a high inflation environment we’re not only losing five million (dollars). You have to decide very carefully where you invest your dollar.”

There could be several areas to look at, then, for Mercedes.

It has struggled to adapt the car with one of the main issues being “porpoising” — another F1 term — which means an aerodynamic issue where cars hop and bounce on the track.

“We do seem a step behind our rivals, and we do have a lot of work to do between now and next week to understand,” Hamilton's teammate George Russell said. “Because in every (racing) condition the Red Bull and Ferrari seem a step ahead of us. We're not as competitive as we'd like."

Verstappen hinted at that as he drove excellently on Saturday to set the fastest time in all of the testing. And, after a horrid 2020 campaign and a handful of podiums but no wins in 2021, Ferrari could be smiling again.

It's been 15 years since Kimi Raikkonen won the title — an eternity for F1's most famed team — but The Prancing Horse galloped well in testing and Charles Leclerc is quietly confident.

“It’s definitely one of the smoothest preparations I’ve had for a season," he said. “No major issues.”

Leclerc showed what he could do in 2019, his first season at Ferrari, leading Hamilton 7-5 for most pole positions and then-teammate Vettel 2-1 for wins.

If Ferrari gets it right, he might have a crack at challenging his old rival Verstappen. The 24-year-olds haven't always got on, and Leclerc said it was tense between them during their karting years.

A microscopic examination of tensions is all the rage now in F1, largely thanks to Netflix's “Drive to Survive” which started to air its fourth season on Friday in time to spice things up on track.

It takes an inside look at F1 drivers and team officials, showing heated arguments and other incidents in the globetrotting racing series.

Not everyone's a fan.

“I’m quite a down-to-earth guy. I just want it to be facts and just don’t hype it up," Verstappen said. “It’s just not my thing.”

Besides, he has to focus on holding off Hamilton.