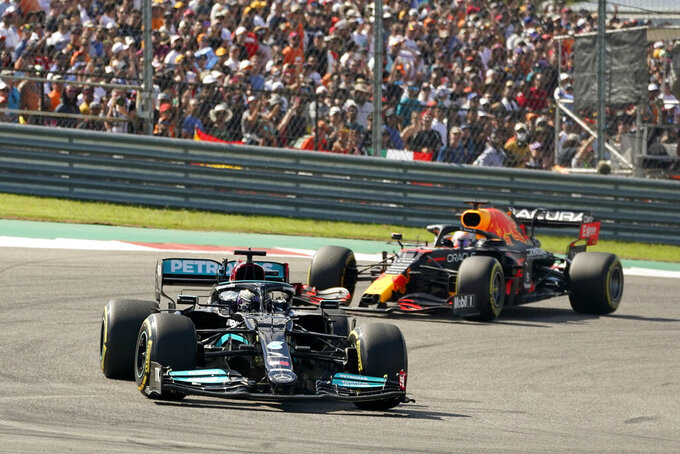 Through pulsing race wins, crashes and clashes, the two have crafted F1's best on-track duel in a decade. It's pumped new energy into the world's biggest motorsports series after years of predictable results that include 100 Hamilton victories since 2007.

“Max is driving on the knife. So is Lewis," two-time F1 champion Emerson Fittipaldi said at the U.S. Grand Prix. "Both are driving the limit. The excitement is back in Formula One."

The championship protagonists seek the same title at speeds separated by split seconds. Yet they couldn't be any more different.

Hamilton rose from a working-class British upbringing where his dad worked multiple jobs to earn the money to support his son's junior career in karting. Hamilton, F1′s only Black driver, has said he endured racial abuse as young driver rising through the European ranks.

But with his wins and titles, his celebrity grew and Hamilton tapped into his vast social media platform (Hamilton has 24.5 million followers on Instagram; 6.6 million on Twitter) to become an activist against racism. He also promotes environmental sustainability and veganism, and he's started a foundation to create opportunities for minority drivers and teachers. He also partnered with designer Tommy Hilfiger for a Hamilton fashion line.

Now nearing the twilight of his career, the 36-year-old Mercedes driver is chasing an eighth championship that would break his tie with Michael Schumacher and perhaps crown him as F1’s greatest driver.

Standing in his way is Verstappen's Red Bull team that has become Mercedes' biggest nemesis in years.

The 24-year-old Dutchman leads Hamilton by 12 points headed into this weekend's Mexican Grand Prix as he chases his first F1 title with five races remaining this season. He is the son of former F1 driver Jos Verstappen, who was winless in 106 grand prix and best known for a brief pairing as teammate to Schumacher and escaping a raging fire during a refueling mishap in 1994.

Known as “Jos The Boss," the father has been intimately involved in his son's career and built many of Verstappen's karting engines. He has a reputation for tough love with young Max, and once booted him out of the family van in disgust after a crash in an important race.

“He knew what it took to be a Formula One driver and he always prepared me from a very young age to be ready for it,” Verstappen said. “I think in our family we are very focused on what we do and I grew up like that."

While Hamilton uses his celebrity to embrace social activism, Verstappen has generally avoided the limelight. He loves to spend hours upon hours playing video games — Red Bull Team Principal Christian Horner said Verstappen spent about “14 hours” with a console in his hands when not behind the wheel.

Last year, Hamilton sharply criticized F1 for its “silence” on racism amid the protests over the death of George Floyd and urged drivers to join him in taking a knee in pre-race introductions. Verstappen said he supported free speech and opposed racism, but was one of six drivers who remained standing.

Their clashes on the track have been more direct. Verstappen and Hamilton have had two race-changing collisions this season, the first a high-speed bump on the opening lap of the British Grand Prix that sent Verstappen into the wall and to the hospital for observation. Hamilton won and Red Bull fumed about his victory lap while Verstappen was still at the hospital.

A smashup in Italy sent Verstappen's car airborne and it came dangerously close to crushing Hamilton's head if not for the halo bar over the cockpit. Racing fans worldwide watched as Verstappen got out of his car and stomped away without checking on Hamilton, who was fine.

“A 50G impact, or having a car on your head?" Mercedes Team Principal Toto Wolff told the Daily Mail this week. “Look, both walked away unharmed. That was the consequence, so fine, we move on."

Wolff even suggested the two might collide again — and Hamilton could be the aggressor — if the season is in the balance in the final race in Abu Dhabi: "I would never give the instruction to crash into anyone else, but if they go to that last race and whoever is in front wins the championship, they will be racing each other, hard."

Verstappen once had a reputation as “Mad Max,” a risk-taker who pushed his car and other drivers to the limit. Former champion Kimi Raikkonen at one point warned Verstappen would someday cause a “massive accident.”

In 2019 in Mexico City, Hamilton called Verstappen a “magnet” for contact and vowed to steer clear. It's an open debate whether it was Hamilton's aggressive driving at Silverstone in July that sent Verstappen into the wall.

Daniel Ricciardo, Verstappen's former Red Bull teammate who had his own frustrations in their partnership, said the Verstappen who leads the 2021 title chase is a wiser, more mature driver.

“There was a stage in Max's young career that he had the speed but there was still a few mistakes,” Ricciardo said. “In 2018, you could see that click in maturity.”

Verstappen still gets mad, but has tempered the tantrum.

At the U.S. Grand Prix, Verstappen called Hamilton a “stupid idiot” and showed him the middle finger in practice. Emotions were calmer two days later when Verstappen won and the drivers gave each other a fist bump and clinked champagne bottles on the podium.

Hamilton has been in scraps like this before, it's just been a while.

In his 2007 rookie season, Hamilton lost the championship by a point to Raikkonen. He won it the next year by the same margin over Felipe Massa with a crucial pass on the final lap of the last race of the season.

Hamilton's battle with Mercedes teammate Nico Rosberg went to the last race of 2014. Rosberg won in 2016 as the Mercedes garage seethed with tension. Rosberg retired immediately after the championship and Hamilton's next four titles were much more dominant.

“Although Lewis has the experience of winning titles, I don't see that as an advantage now,” Ricciardo said. “Max is capable. He's got a pretty stable head on his shoulders and he's proven that with some of his drives this year.”

Four-time champion Sebastian Vettel said Verstappen has pushed Hamilton harder than he did in 2018 when Vettel finished second.

“I think we are seeing a very clean fight so far,” Vettel said. “We were not as competitive (in 2018). I think it was very easy for him in the end.”

In 1974, Fittipaldi's battle with Clay Regazzoni came down to the final race at the U.S. Grand Prix at Watkins Glen, New York, and they were tied when the race started.

Fittipaldi won the title by finishing fourth ahead of Regazzoni that day.

“I only slept three hours” before the race, Fittipaldi said. “It was tremendous pressure ... Oh my God, I hope we have that again.”