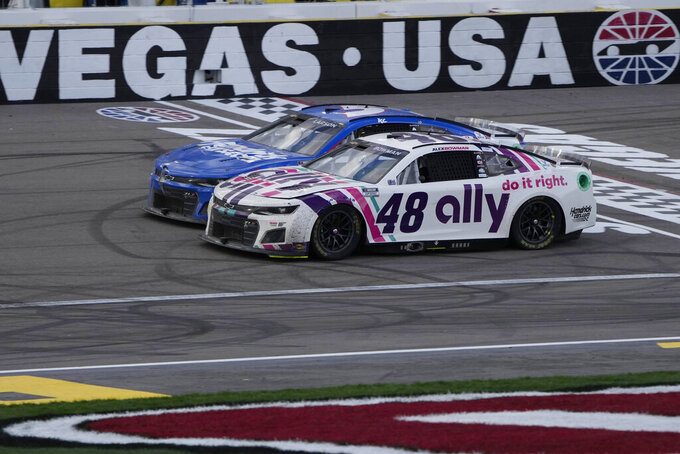 AVONDALE, Ariz. (AP) — Tyler Reddick is enjoying his status among NASCAR's fastest drivers through the season's first three races, adapting quickly to the sport's Next Gen car that has provided solid racing and a new degree of difficulty for many drivers.

The only issue is Reddick can't seem to get comfortable in his Chevrolet's seat, leading to numbness in his legs.

“You know, I just think I was in a really good place in that old car for such a long time and didn’t realize how easy or how bad you could end up missing it, the comfort side of things,” Reddick said.

If Reddick can find a way to fix his leg issues, he might just find a spot in victory lane for the first time in his NASCAR career. The 26-year-old, who is in his third season with Richard Childress Racing, has led the most laps (90) of any driver so far this season.

So far, those laps up front haven't led to great finishes in 2022. He was 35th at Daytona and 24th at Fontana after he was doomed by a flat tire before a seventh-place showing at Las Vegas last week. Now the racing has moved across the desert to the tri-oval in Phoenix, which will host the NASCAR championship again in November.

Reddick said it's been hard to diagnose his leg problems because it's difficult to recreate racing conditions in the garage.

He's not the only one who has had numbness issues in the new car: Alex Bowman talked about having some of the same problems at Daytona. Team Penske's Austin Cindric — who won at Daytona — said his “right butt cheek was on fire” after a few laps at Las Vegas last week.

“It's pretty challenging to understand sitting still, you know with no load, no bumps, no heat, whatever it might be, to really feel if there is going to be a problem,” Reddick said. “It’s hard to really understand what’s OK and what’s not.”

Kyle Larson — the defending NASCAR champ who already has won once this season at Fontana — said last week that he expects Reddick to have an “amazing season" after the driver led the pack during offseason testing. That could start on Sunday in Phoenix, though everyone is wondering how the new cars will adapt in Arizona.

Speaking of the Next Gen cars, Bowman is curious how they're going to react to restarts following cautions at Phoenix.

Restarts are somewhat nuts at most tracks as dozens of cars jockey for position, but the tri-oval at Phoenix Raceway provides a new challenge because drivers have a lot of space to maneuver on the apron if they can control their car.

“Restarts here? They're kind of notoriously crazy cause of the dogleg and being able to shortcut that,” Bowman said. “I'm not sure anybody's gone down there with the Next Gen car yet, just because of how rigid the car is and how things happen when the car hits the ground."

Bowman, last week's winner in Las Vegas, said he's interested to see if the apron is good for racing. But he doesn't plan on being the guinea pig.

“Let somebody else figure that out first I guess,” Bowman said, grinning.

Ryan Blaney will be on the pole while Denny Hamlin will start on the outside of Row 1 on Sunday.

Two of the three winners so far this season — Alex Bowman and Austin Cindric — will also start in the top 10. Larson qualified seventh but will start from the back of the field on Sunday because of unapproved adjustments to his steering wheel.

Kevin Harvick is back at Phoenix where he's had plenty of success.

But the 46-year-old hasn't won at the track since 2018 and the Next Gen car provides another wrinkle for the veteran driver to navigate. Harvick said the new car might be different, but after three races, it's no longer an excuse.

Harvick's nine wins at Phoenix are far and away the most in Sunday's field. Kyle Busch has won three times while Joey Logano and Denny Hamlin have both won twice.

Larson is a 4-1 favorite to win at Phoenix, according to FanDuel. Truex is next at 7-1 odds ... Much of the rest of the U.S. might be groggy on Sunday because they lose an hour of sleep due to the clock change of Daylight Saving Time. That won't be the case in Arizona, which doesn't recognize DST. ... Bowman is a native of Tucson, Arizona.