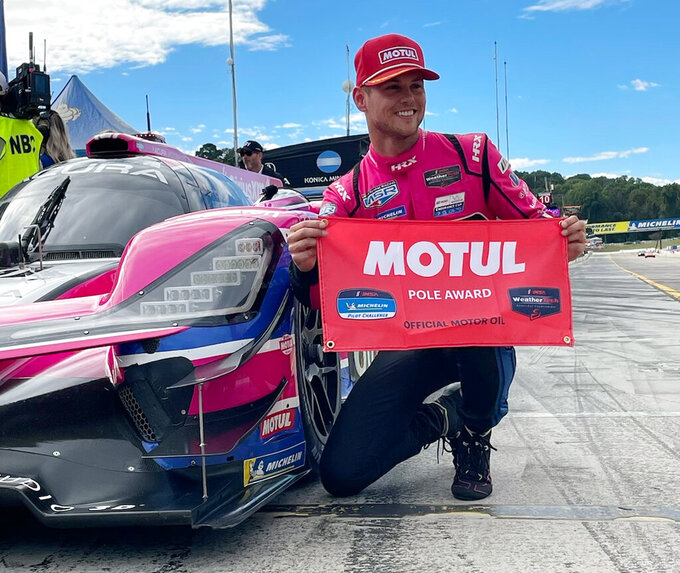 BRASELTON, Ga. (AP) — Michael Shank paced nervously at the pit stand as Tom Blomqvist turned qualifying laps at Road Atlanta. The team owner admitted he was more nervous than he was watching Helio Castroneves win him the Indianapolis 500.

The IMSA sports car season championship will be decided Saturday and Shank desperately wants the title. Meyer Shank Racing trailed Wayne Taylor Racing by 19 points headed into Friday qualifying, but Blomqvist won the pole to cut the deficit to 14 points.

“My God, the race is going to be a bloodbath,” Shank said. “We're not bringing anything back. We want this championship.”

WTR, with Ricky Taylor as the driver, qualified third despite Taylor going off track during the session. The team lost the championship in the final turn of last year's 10-hour race.

“Qualifying was important for points,” said Ricky Taylor. “They had a lot to lose in terms of championship points. In the scheme of the points, it didn’t change a whole lot. I’m feeling good since it’s such a long race and the team does such a good job strategizing and putting us in a good position."

Acura will clinch the championship as soon as the race begins Saturday, with Shank and Wayne Taylor battling to represent the manufacturer on the championship stage. Their season-long battle has seen the two teams swap the lead five different times, and, the points leader of the Daytona prototype class has changed after every race this year.

But it's down to the two Acuras on Saturday, with Shank bringing in four-time Indy 500 winner Castroneves to join Blomqvist and Oliver Jarvis in the No. 60. The trio won the season-opening Rolex 24 at Daytona for its only win of the year, but five runner-up finishes kept MSR in title contention.

Now the car simply must finish ahead of Taylor's No. 10 to close out a remarkable four-year stretch for Shank, the small team that is steadily making huge gains. MSR won the GTD championship in 2019 and 2020 before moving to IMSA's top class in 2021, the year Shank began expanding his IndyCar program and won the Indy 500 with Castroneves.

Then MSR opened this year by winning the Rolex on the 10th anniversary of its only other win at Daytona. Now in the final race for the current Daytona prototype ahead of the switch next year to a new hybrid-powered car, Shank wants to be the Acura champion.

“It's my own personal pressure, but it's the reality, we need to be putting W's up,” Shank said.

Blomqvist was immune from Shank's nerves.

“I was pretty confident. I've got a lot of self-confidence,” said Blomqvist, who is being rewarded by Shank with an IndyCar test at Sebring on Oct. 12.

“I knew the car was good in practice. And as soon as I turned into Turn 1, I knew immediately we had a great chance at pole. It’s been fantastic this week so far, and in qualy it really came to life. It makes life a little less stressful, but it’s still going to be a proper dog fight.”

The Taylor team, meanwhile, is trying to close out a championship in this four-win season and its star driver has been in this position for three consecutive years. Ricky Taylor teamed with Castroneves to win the 2020 championship in their final race for Team Penske, and last year Taylor and Filipe Albuquerque lost the title in the final turn.

“I wish it would be more boring,” Taylor said. “It’s been super tough. It’s never been easy. It’s nice to have the experience of having been there before. It’s really difficult to go into the last round of the championship fighting for the title, let alone being a 10-hour endurance race that already on its own is one of the most difficult races in the world. All that compounded together makes for quite the drama and quite the stress for teams and drivers.”

Taylor and Albuquerque have been joined in this race by Brendon Hartley, winner of Le Mans this year and a past Petit winner.

“I’m very confident in our lineup and our team compared to them over the course of 10 hours,” said Ricky Taylor. "I’d put my two teammates up against those guys any day. I think we are all feeling optimistic and strong for tomorrow.”