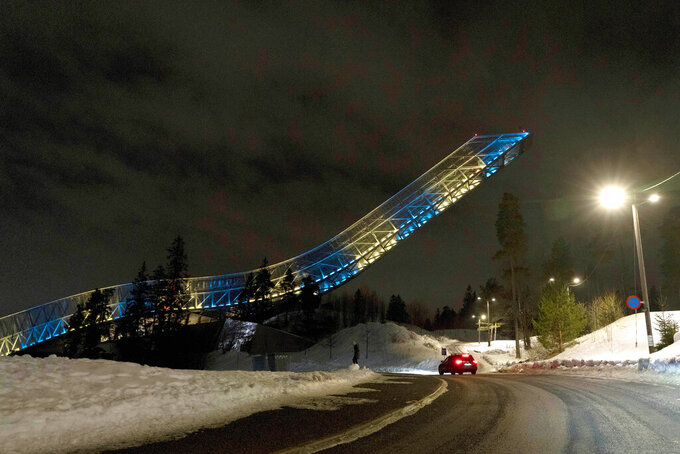 A view of Holmenkollen ski jumping hill lit up in the colors of the Ukrainian flag, to show support for Ukraine in light of Russia's invasion of the country, in Oslo, Monday, Feb. 28, 2022. Norway challenged a decision by the International Ski Federation to allow Russians to keep competing, and said it would block them from upcoming rounds of the World Cup that Norway hosts this week. (Terje Pedersen/NTB via AP)

GENEVA (AP) — More and more sports are following the appeal of the International Olympic Committee and banning Russian athletes from competing in the wake of the country’s invasion of Ukraine.

Russia was barred from competing in international ice skating, skiing, basketball, track, and some tennis events Tuesday, a day after being kicked out of soccer competitions and hockey — Vladimir Putin’s favorite team sport. The decisions follow the IOC's request to international sports federations to keep Russian athletes out of events they organize.

The International Skating Union, the body that runs the sport around the world, said no athletes from Russia or Belarus “shall be invited or allowed to participate” in events until further notice.

Belarus has been a key ally of Russia in its attack on Ukraine.

The world figure skating championships are scheduled for later this month in Montpellier, France. The ISU decision means Olympic champion Anna Shcherbakova and 15-year-old teammate Kamila Valieva, who was the focus of a still-unresolved doping dispute at last month’s Winter Olympics, will be excluded from the competition.

The sports restrictions have drawn sharp criticism from Russia.

“Our country has always adhered to the principle that sport is beyond politics, but we are constantly drawn into the politics, because they understand the importance of sport in the lives of our Russian people,” Deputy Prime Minister Dmitry Chernyshenko, who was stripped of an IOC honor for organizing the 2014 Sochi Olympics, said Tuesday at a Sports Ministry meeting.

Russian and Belarusian tennis players including top-ranked Daniil Medvedev, who is Russian, can play on the ATP and WTA tours, but without national flags, and at the Grand Slams. The countries are barred from team competitions like the Davis Cup and Billie Jean King Cup until further notice. Russian players won both last year and are already qualified for this year's finals as defending champions.

In Norway, Russian cross-country skiers — who won 11 medals at the Beijing Olympics — were heading home after being excluded from competition by the International Ski Federation, known as FIS.

The decision came after a three-day standoff with Norwegian ski officials, who said they would refuse to let Russians and Belarusians race if FIS maintained its previous policy of allowing them to compete as neutral athletes.

“Firstly, I am glad that FIS has taken this decision," said Norwegian ski federation president Erik Røste, who also sits on the governing body's ruling council. “Then I have to be honest and say it has taken too long.”

The FIS position shifted Tuesday morning after its president, Johan Eliasch, took part in a conference call hosted by the IOC with the governing bodies of Olympic sports.

In track and field, Russia has been suspended since 2015 for doping violations but allowed to compete as “Authorized Neutral Athletes.” On Tuesday, the sport moved to a blanket ban on Russia and Belarus.

The governing body of track is run by Sebastian Coe. As an athlete, Coe defied calls to boycott the 1980 Moscow Olympics because of the Soviet Union's invasion of Afghanistan and won a gold medal in the 1,500 meters.

“I have railed against the practice of politicians targeting athletes and sport to make political points when other sectors continue about their business,” Coe said. "This is different as governments, business and other international organizations have imposed sanctions and measures against Russia across all sectors. Sport has to step up and join these efforts to end this war and restore peace. We cannot and should not sit this one out.”

Russia was suspended by the International Basketball Federation. That will hit Russia's bid to qualify for next year's men's World Cup. Russia already had one qualifying game against the Netherlands called off last week. The Russian women's team has qualified for a place at the World Cup in September.

Other sports like swimming, cycling and auto racing haven't followed the recommendation from the IOC to ban Russians.

Swimming's governing body, known as FINA, said Tuesday it would allow Russian and Belarusian swimmers to take part “as neutrals, competing under the FINA flag and with the FINA anthem.”

Russia is hosting the world short-course championships in December. FINA said it had withdrawn a federation honor awarded to Putin in 2014.

Cycling will allow Russian riders to compete as neutrals but will bar Russian and Belarusian teams and sponsors. Auto racing's international body, the FIA, said Russian drivers like Nikita Mazepin can still compete but a block on having cars in national colors would stop Mazepin's team Haas bringing back the Russian flag-stripe livery it removed during last week's testing. The Russian Grand Prix was cut from the calendar on Friday.

Russian athletes have already arrived in China for the Winter Paralympics, which open Friday. They are scheduled to compete as RPC, short for Russian Paralympic Committee, after the IOC offered a possible exemption for events starting at short notice. The Ukrainian team isn't yet in Beijing, but organizers said they expect the country's athletes to arrive in time.

“As the world watches in horror while Russia brazenly attacks the innocent people and athletes of Ukraine, this is the only acceptable action to be taken until peace has been restored,” the USOPC said in a statement.

The governing bodies of three Olympic sports — fencing, shooting and boxing — are led by Russians. So far, only shooting has barred Russian athletes from competing.

The billionaire president of the International Fencing Federation, Alisher Usmanov, said Tuesday he would “suspend the exercise of my duties ... until justice is restored" after being sanctioned by the European Union.

The invasion has also led to some sponsors and companies cutting ties. Adidas, the maker of the Russian national soccer team jerseys, said it was suspending its partnership with the federation with immediate effect.