Leagues finally cash in on sports betting by selling data 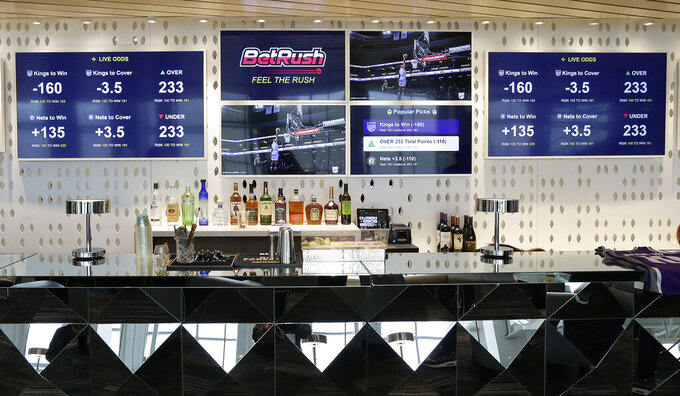 FILE - In this March 19, 2019, file photo, video screens display the types of bets that can be placed at the Golden 1 Center's Skyloft Predictive Gaming Lounge, in Sacramento, Calif. Professional sports leagues have found a way to cash in by selling their official data to gambling companies, making the case that the leagues are creating new products for gamblers to bet on. (AP Photo/Rich Pedroncelli, File)

ATLANTIC CITY, N.J. (AP) — Professional sports leagues struck out in their quest for a cut of sports betting money by claiming they needed payments to help protect the integrity of games.

They also fumbled an attempt to claim a share of betting proceeds by saying the games are the intellectual property of the leagues, and that they should be compensated when others profit off them.

But with two strikes against them, the leagues may have hit on a way to cash in: selling their official data to gambling companies, making the case that the leagues are creating new products for gamblers to bet on.

Six of the largest U.S. bookmakers already use official league data under terms they negotiated directly with the leagues.

“Last year it was, ‘Here are the leagues with their hands out,’” said Scott Kaufman-Ross, senior vice president of fantasy and gaming for the NBA. “Now we realize there’s a lot we can offer each other. More and more operators are starting to see the value in this.”

While not delighted with the added expense, the companies see the value in using official data, particularly for in-game betting, the fastest-growing segment of sports betting in the U.S. In such instances, determining whether a running back gained 100 yards or 99 yards could be the difference between winning or losing a bet, and having the leagues’ data serve as the last word provides a level playing field for bettors and bookmakers alike.

“We’re collecting a lot of data,” said Chris Golier, vice president of business development for the NHL. “We are the only ones that can extract that kind of data and collect it. We’re putting chips in pucks, chips in shoulder pads. It’s a whole new manufacturing process to have a piece of rubber with a chip in it that can bounce off the wall. It’s going to be 2,000 data points a second. These things will turn into prop bets over time.”

NASCAR has invested heavily in technology it says is creating new betting opportunities — and the company feels it deserves to be paid for it.

“We are creating a market that hasn’t existed,” said Scott Warfield, NASCAR's managing director of gaming. “How can we get our fans to watch an extra 30 to 45 minutes? We can when they’re betting on stage 2, or who’s leading in lap 100. There’s a lot to bet on. It’s taking that data and creating a new product that didn’t exist. I don’t physically know how you would do it without official data: (keeping track of) 36 cars going 200 miles an hour at the same time.”

The NFL has inked a deal with Sportradar to distribute official league data to bookmakers in the U.S. and in other countries.

DraftKings, FanDuel, William Hill, MGM Resorts, Caesars Entertainment and Betstars are among gambling companies that have reached individual deals with leagues to buy their official data. They generally do not reveal how much they pay for the information.

Why is this important? Sports betting has very small profit margins, typically between 5% and 7%. With state taxes, payments to technology partners, marketing and other expenses, even a seemingly small additional cost, such as a quarter of 1% of the amount bet, quickly adds up and affects the bottom line for bookmakers.

That is no small concern in what right now amounts to a gold rush in the year-and-a-half-old sports betting market in the U.S., with dozens of companies scrambling for market share — and the likelihood that not everyone in business today will be in the market in 5 years.

And in a trend already emerging, some bookmakers seeking to defend their profits are offering less favorable odds — and smaller payouts — to gamblers, something likely to accelerate if more bookmakers feel pressure on their bottom line.

Of course, gambling companies are under no obligation to use official league data, and several don't. They can get it from a variety of sources, including aggregated data that they or a third party collect from a league website (a process known as data-scraping.) Or they could collect the data themselves from live events.

“Sports books have been running in Nevada for decades without official data,” said Seth Schorr, chairman of the Downtown Grand Las Vegas casino. “Having an NFL logo next to the data will not mean a thing.”

But those options are much slower than getting a flow of data from the league itself and would be virtually unusable for the quick pace of in-game betting. The NBA's Kauffman-Ross said his league’s games are simply too fast-paced to rely on third-party data.

“We collect our official data courtside as it happens,” he said. “The speed of that data is incredibly important. We have hundreds of lead changes. You can be one to two plays behind if you collect data off a broadcast feed. A player that hits a couple of 3-pointers can meaningfully change the odds.”

Numerous pro teams already are building spaces for fans to bet on mobile devices while they watch the games in person — even in places where sports betting is not yet legal. Those include the Golden 1 Center in Sacramento, California, where the NBA's Kings introduced fans to a contest to predict outcomes that would win them points toward merchandise — not quite sports betting, but not very far from what it will eventually look like if and when California legalizes it.

Those spaces, and others including arenas in Newark, New Jersey; Philadelphia and Washington, could use official league data in their offerings to fans.

Bookmakers want the freedom to pay for what they want, and strongly oppose the government-mandated use of official league data in their operations. That is required by at least two states: Illinois and Tennessee.

“A lot of operators have an allergic reaction when you talk about federal legislative oversight of our industry,” said Joe Asher, CEO of William Hill US.

The leagues argue that they are creating new betting products by enhancing the data that they sell to gambling companies. That is part of the reason these companies have been willing to pay for a product instead of simply writing the leagues a check.

The PGA Tour says it is creating new betting opportunities through its complicated (and expensive) ShotLink technology.

“ShotLink gathers data from every shot; there are more than 30,000 shots in a golf tournament,” said Andy Levinson, senior vice president for tournament administration with the PGA Tour. “We’re collecting multiple data points, and they are going to be potential betting points. There’s going to be opportunities over a season to have millions of markets created in golf. You’re talking about distance, ball location, whether it’s on the fairway or in the rough. If a player has a 10-foot uphill putt, there’s going to be historical data on that shot. Our sport is perfect for it.

“That requires 60 people every week; we have to lug 5 miles of cable,” he said. “We have cameras, laser systems around our greens. It’s an extremely expensive process.”

“Baseball has always been a statistics-driven sport," said Kenny Gersh, executive vice president of gaming and new business ventures for MLB. “Are the pitches breaking as much in the third inning as they were in the first inning? What’s the spin rate? We spent all this time and money to develop and implement this.”

“Now, we can market betting products off of that data,” Gersh said. “My hope for baseball is that betting evolves, that you can make micro-bets: Is Aaron Judge going to hit a home run off Chris Sale in the seventh inning? What are the odds of that happening? We can market those tools so that sports books can offer a better product. We’re much better together than we will be apart.”