The Latest: Hamilton says Lauda 'bright light in my life' 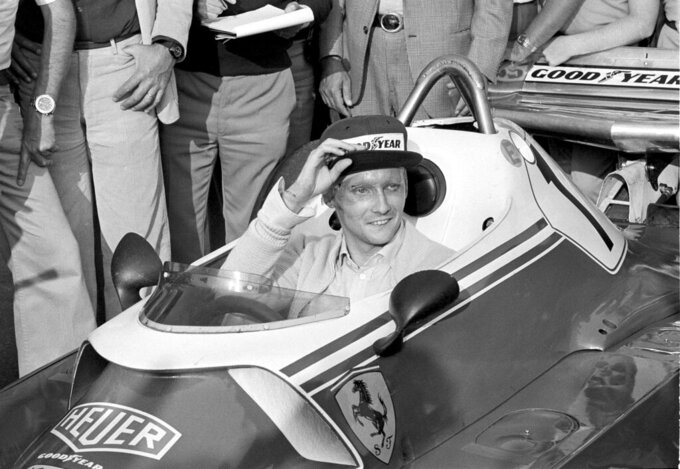 FILE - In this Sept. 7, 1976 file photo Austria's Niki Lauda behind the wheel of his Ferrari 312 T2 on the track of Florano after a near fatal crash on Aug. 1 during the German Grand Prix. Three-time Formula One world champion Niki Lauda, who won two of his titles after a horrific crash that left him with serious burns and went on to become a prominent figure in the aviation industry, has died. He was 70. (AP Photo/Raoul Fornezza, File)

Formula One world champion Lewis Hamilton said Niki Lauda was a "bright light in my life" and that he is "struggling to believe you are gone."

Hamilton drives for Mercedes, where Lauda served in recent years as the non-executive chairman of the team.

"I will miss our conversations, our laughs, the big hugs after winning races together," Hamilton said on Twitter. "God rest your soul."

Hamilton said he would "always be here" for Lauda's family.

Lauda and Prost drove together for two seasons for the McLaren team in 1984-85.

"It's simple. When I started to take an interest in Formula One, I had two models: Jackie Stewart and Niki," Prost told L'Equipe newspaper. "And I had the chance to spend two years by his side. These were the two most beautiful and best seasons of my career."

Lauda beat Prost for the title by half a point in 1984, but the Frenchman said he never resented his former teammate, who died on Monday, aged 70.

The family of Niki Lauda said in another statement on Tuesday that the Formula One great died at a hospital in Zurich, the Austria Press Agency reported.

"We were by his side for every minute of the last 10 months," it said. "We laughed, cried, hoped and suffered with him.

"Niki, you were a unique fighter and an extraordinary person. We love and will miss you forever."

The statement was signed off by his second wife Birgit, his ex-wife Marlene, and children Lukas, Matthias, Max and Mia.

A doctor who oversaw Niki Lauda's lung transplant last year says the three-time Formula One champion had been in poor shape for some time.

Walter Klepetko of Vienna General Hospital told the Austria Press Agency on Tuesday "it was a long process at the end of which the patient passed away."

He added "Niki Lauda fought. He was a great man. But it had been clear for some time that we could not get him back on the 'racing track.'" He said he wouldn't give further details, citing privacy issues.

Lauda underwent a lung transplant in Vienna in August. His family said the 70-year-old Lauda died on Monday.

Mercedes F1 team principal Toto Wolff says Niki Lauda "will always remain one of the greatest legends of our sport" after the three-time world champion passed away.

Lauda, who won two of his world titles after a horrific crash that left him with serious burns, died on Monday. He was 70.

In a statement on Tuesday, Wolff said Lauda "combined heroism, humanity and honesty inside and outside the cockpit. His passing leaves a void in Formula One. We haven't just lost a hero who staged the most remarkable comeback ever seen, but also a man who brought precious clarity and candor to modern Formula One. He will be greatly missed as our voice of common sense."

Formula One great Niki Lauda, who won two of his world titles after a horrific crash that left him with serious burns and went on to become a prominent figure in the aviation industry, has died. He was 70.

Walter Klepetko, a doctor who performed a lung transplant on Lauda last year, said on Tuesday: "Niki Lauda has died. I have to confirm that."

The family statement said: "His unique successes as a sportsman and entrepreneur are and remain unforgettable. His tireless drive, his straightforwardness and his courage remain an example and standard for us all. Away from the public gaze he was a loving and caring husband, father and grandfather. We will miss him very much."