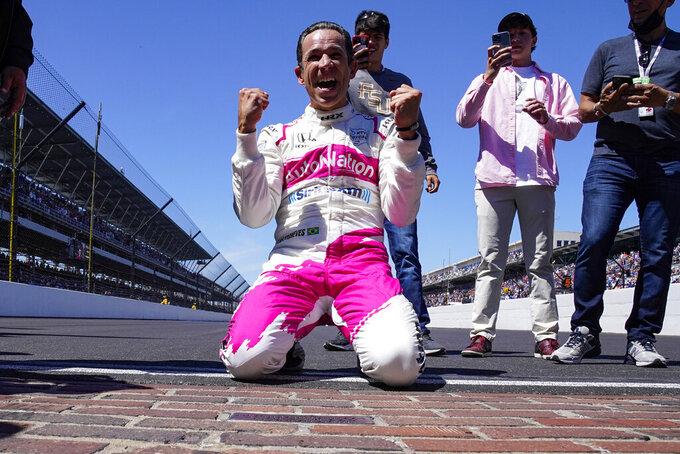 Helio Castroneves of Brazil celebrates on the yard of bricks at the start/finish line winning the Indianapolis 500 auto race at Indianapolis Motor Speedway in Indianapolis, Monday, May 31, 2021. (AP Photo/Paul Sancya)

Helio Castroneves had hoped his fourth Indianapolis 500 victory would lead to a seat this weekend at IndyCar's doubleheader in Detroit.

He asked, many times over, but Meyer Shank Racing held to its original plan.

The team said Monday it will field just its usual one car with Jack Harvey in the Detroit Grand Prix doubleheader, as well as its sports car in the IMSA race. The team has a six-race plan with Castroneves that launched at the Indy 500 and delivered MSR its first IndyCar victory.

Castroneves will instead make his debut Saturday night in Tony Stewart's All-Star Superstar Racing Experience at Stafford Motor Speedway in Connecticut as previously scheduled. His next scheduled IndyCar race is at Nashville in August. He's also scheduled to drive for MSR on the Indianapolis road course, as well as at Portland, Laguna Seca and the season finale at Long Beach.

“Heck yeah I wanted to go to Detroit. It's a dear place in my heart but I understand. I can only push, you know?” he said. "I think I do have a little bit of a credit, but I understand about priorities. We're constantly talking, we're living in a great place. But it's not like ‘let’s just jump in and make this happen.'

Castroneves has three career victories at Belle Isle, including his first career win in 2000 in which he climbed his first fence in celebration. It became his signature victory move and when he won the 500 on May 30 in a part-time entry for Michael Shank, his celebratory fence climb became one of the indelible moments in the 105 runnings of the the race.

Indianapolis Motor Speedway had opened to 135,000 fans in the largest sporting event since the start of the pandemic and hundreds of people climbed the fence to celebrate with only the fourth four-time winner. Castroneves was the first driver to join the four-time club since 1991.

He's made no secret that he wants to be racing full-time in IndyCar but the only ride he could get this year was the six-race deal with Shank, who is conservatively trying to grow his program. The 46-year-old Castroneves spent two decades driving for Roger Penske but had been aged out, moved over to the sports car program in 2018 and then cut loose after winning the IMSA championship last season before Penske folded the team.

“If he wants to go back fulltime in IndyCar, he definitely should. I feel like he’s been kind of pushed to end his IndyCar career,” Sebastien Bourdais said Monday. “I really feel like that’s the only thing that I’ve regretted for him, that it didn’t end on his terms. He was definitely not showing a slowing-down phase.”

Seats are now going to the younger drivers — IndyCar has six different winners in its six races, four are younger than 24 and three are first-time winners — and teams now are offering rides to Colton Herta, Alex Palou, Pato O'Ward and Rinus Veekay.

“Right now there’s just a lot of young guys that are very good. The opportunities, like it or not, are probably going to go to Colton, probably going to go to guys like Rinus. It just is what it is,” veteran Graham Rahal said. “Does he deserve to be fulltime? Of course. He didn’t really get to end it on his terms. It was basically, ‘Here is what you’re going to go do next year.' He didn’t get to have kind of a retirement tour. Maybe he doesn’t want one.”

Shank has said his wife makes the business decisions for the team and is very financially conservative, but he believes Castroneves can return to Indianapolis next year for a shot at becoming the first five-time winner.

“Just showing up and winning Indy every year sounds good to me,” Rahal said. “You can make a hell of a lot more money than running full-time.”

Until then, Castroneves will try to stay busy. He has run only two races so far this year, but both were victories, beginning with his first career win in the Rolex 24 at Daytona sports car race in January.

Now he'll try something totally different in the six-race made-for-TV all-star series launched by Stewart and Ray Evernham set to race at classic short tracks across the country. All the venues will be new to Castroneves, as will the cars and the style of the racing. He said he last raced on a dirt track on a BMX bike when he was 8 in Brazil.

“I need to stay active, I need to find something,” he said. “I'm ready to learn, I will try to be competitive for sure. Sometimes you try something new, it might not go the right direction, so let's see.”