F1 puts its chips on Las Vegas: Series to race The Strip 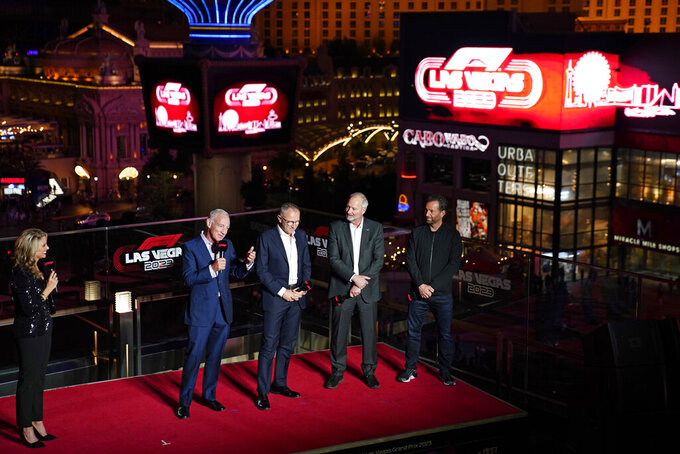 LAS VEGAS (AP) — With a flip of a switch, it was lights out on the world famous Las Vegas Strip.

The most glamorous motorsports series in the world will add a third race in the United States to the 2023 calendar — a Saturday night event down the Strip — as F1 continues to expand its North American footprint.

F1 will turn 50 laps around a temporary 3.8-mile street course next November that will feature the Bellagio, Caesars Palace and the MSG Sphere among the many landmarks on the circuit. F1 will promote the event alongside Liberty Media Corp., the American parent company of F1.

It will be the first F1 race promoted by Liberty, which took over as F1's rights holder in 2017 and set a determined focus on growing the series within the United States. ESPN said viewership for Sunday’s race in Saudi Arabia broke the week-old record for the network and was ESPN's largest F1 audience since 1995.

The fourth season of the Netflix docuseries “Drive To Survive” dropped earlier this month to enormous ratings; the behind-the-rope look at F1 ranked No. 1 in 33 countries the weekend it was released. It's made the American market irresistible, and F1 and Liberty are intently chasing every set of eyeballs it can attract.

“It's our home market, so that makes it more interesting, and obviously it's the largest economy in the world, the largest disposable income," Greg Maffei, President and CEO of Liberty Media, told The Associated Press. “It's an opportunity that had not been pursued historically and it's where we think a lot of our growth can come.”

But unlike the bulk of the F1 calendar, a host country isn't writing a check to the series for the rights to host a grand prix. Liberty and F1 are the promoters — there are official partners in the endeavor — and have agreed to an initial three-year deal with Las Vegas.

The Las Vegas race will be the third stop in the United States next season for F1, which has raced at Circuit of the America’s in Austin, Texas, since 2012 and in May will make its debut in Miami. Barring any shakeups, existing races in Mexico City and Montreal will bring F1 to North America five times next season.

COTA, which about five years ago was struggling to draw 100,000 fans over a three-day F1 weekend, was well over 300,000 fans last season. This year's inaugural race in Miami sold out in one day, and COTA is also sold out already.

And that's why F1 is so certain the market can withstand a third U.S. race. No other country hosts more than two races a season.

“We know how to run this business and we know how to add the right element to make the right valuation,” Stefano Domenicali, the CEO of F1, told AP. “We do believe, without being arrogant, that Formula One will be something that the American fans will love to be involved even more. We do believe this is a very important market in developing the love of our sport.”

Speculation surrounding a third race in Las Vegas that utilized the world famous Strip has swirled for more than a year and was at last confirmed Wednesday night in a lavish announcement made at the rooftop pool of The Cosmopolitan Hotel. Nevada Gov. Steve Sisolak said the city expected 170,000 visitors on race weekend to account for 400,000 nights of hotel rooms and and an estimated economic impact of half a billion dollars.

No date was given for the November race, but the Saturday night after Thanksgiving has been discussed. The track layout revealed Wednesday night included three main straights, 14 corners that includes a high-speed cornering sequence, and a single chicane section.

COTA drew more than 300,000 spectators to its three-day weekend last October and track president Bobby Epstein said the addition of Las Vegas to the F1 calendar shouldn't dilute his event.

“There’s plenty to sustain this sport. What I like about what F1 is doing and what I think the fans will realize, is that each event is very different from the other and will be very unique," Epstein told The Associated Press.

“The other US races are going to be more about the city and the destination, and ours is going to be more about the event itself. I’m excited to go to Vegas, not just for F1, but because the city has so much more entertainment, outside and away from whatever the track will be. If I’m already a regular Vegas visitor, it will be more a question of am I choosing to go to F1 this year and not March Madness or a heavyweight fight?"