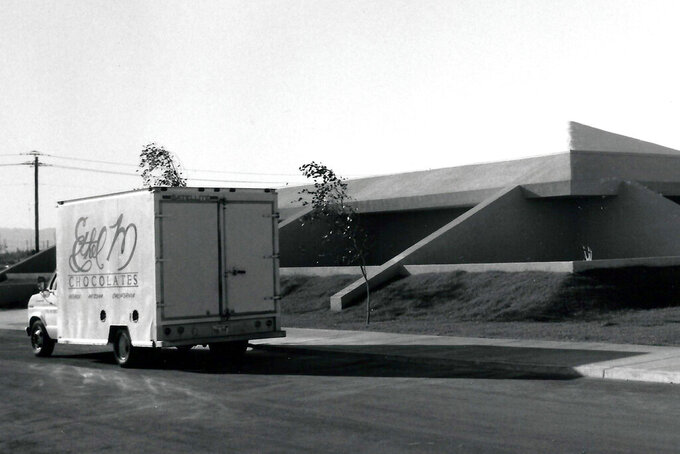 In this undated image provided by Ethel M Chocolates, a delivery truck is seen outside the Ethel M Chocolates building in Henderson, Nev. NASCAR driver Kyle Busch first went to the Ethel M candy factory with his grandmother. It wasn’t a tourist stop to the young Busch, it was a candy store and his grandmother let him roam the cactus garden and rewarded him with the craft chocolates. It comes full circle Sunday at home track Las Vegas Motor Speedway. Ethel M is part of the Mars Corp., the longtime sponsor of Busch’s team. Busch will feature the brand on his car in Sunday’s race. (Ethel M Chocolates via AP) 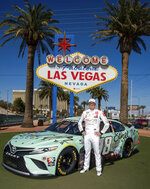 HENDERSON, Nev. (AP) — Tucked away in the desert off Cactus Garden Drive sits a chocolate factory that makes small batch super-premium candy. Every hand-touched piece is made inside the factory, where a viewing area draws 500,000 tourists and locals each year.

Ethel M is such a Las Vegas staple that Kyle Busch often visited as a child with his grandmother. She let him pick chocolates from the case and sometimes wander the 3-acre botanical cactus garden that runs adjacent to the shop.

Years later, after Busch had both made it to NASCAR and also landed a premium sponsor in Mars, he pulled up to the Ethel M Chocolate Factory for a sponsor obligation. It was then that he put it all together: his sponsor was the parent company of a brand that hearkened some of Busch's childhood memories with his beloved late grandmother.

The synergy continues Sunday at Las Vegas Motor Speedway when Busch races his hometown track honoring Ethel M on his No. 18 Toyota. His car is one of the most popular in NASCAR for the colorful confections Mars spotlights each season, but it has always been M&Ms, Snickers or Skittles, all the popular candy.

Mars chose for the first time ever Ethel M, with a green and white scheme, to celebrate the brand's 40th anniversary in its hometown with the hometown driver.

“It's crazy how life comes full circle sometimes,” said Busch, who smiled briefly as he recalled the childhood visits with grandmother Joann Busch.

“You know, I wish my grandmother was still around to see that. She'll be smiling from above,” Busch said. “It was never in my mind, never in my wildest dreams, that I'd be a racecar driver sponsored by M&Ms who had gone to the cactus gardens and had some Ethel M chocolate, and it was going to come full circle for me 35 years later.”

The serendipity isn't lost on Mars, which has an affinity for both the Ethel M brand and NASCAR.

Ethel M was launched by Forrest Mars Sr. when he retired to Las Vegas as a tribute to his mother. The brand features his mother's own recipes that date to 1910 and Mars Sr. went to extraordinary lengths to recreate the craftsmanship of her artificially-free confections.

“Ethel M is extremely special (to the Mars family) because of the history of the brand and how it is talking about their grandmother,” said William Clements, Mars Inc.'s vice president of sponsorships and sports marketing.

“Several members of the Mars family remember her and they have fond stories of talking to their grandmother, being with their grandmother, and being in the kitchen with her, when they taste those products... it brings back all those memories.”

The Mars family is notoriously private and rarely grants public access. Victoria and Pamela, sisters and the granddaughters of company founder Mars Sr., were frequent attendees at NASCAR races prior to the pandemic but have rarely discussed the sponsorship commitment that began in the 1990s.

Clements has been with the company since 1991 and was authorized to speak to The Associated Press on behalf of the family. Clements said the Mars family is passionate about multiple things — “equestrian, arts, culture, social justice, social issues” — but like its associations with the NFL and Major League Baseball, sponsorship in NASCAR is a business decision for Mars investments.

But he noted that Mars' involvement increased as NASCAR grew in popularity. The company moved to Joe Gibbs Racing in 2008 to sponsor Busch and it is one of the longest active partnerships between a sponsor and driver.

“Our brands are winning brands so we need to win in everything we do," Clements said. "Having a race car that is not performing well on the racetrack, we didn't think that aligned with our brands.