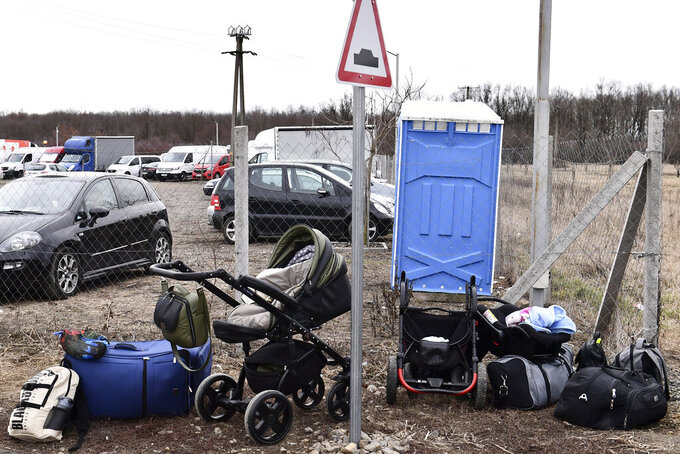 Belongings of refugees are seen close to the Hungarian-Ukrainian border in Beregsurany, Hungary, Saturday, Feb 26, 2022. Hungary has extended legal protection to those fleeing the Russian invasion. (AP Photo/Anna Szilagyi)

VIENNA (AP) — After a barrage of airstrikes on cities and military bases around the country, Russian forces were closing in on Ukraine's capital of Kyiv on Saturday. City officials warned of street fighting, and residents were preparing for a third night of assaults.

Here are the things to know about the Russian invasion of Ukraine and the security crisis in Eastern Europe:

WHAT IS GOING ON IN UKRAINE'S CAPITAL?

Russian troops closed in on Kyiv and skirmishes flared on its outskirts Saturday as Ukraine’s leader vowed to continue battling an invasion that had terrified men, women and children seeking safety inside and underground amid a 39-hour curfew the government imposed to keep people off the streets.

Ukrainian officials reported some success in fending off Russian assaults, but fighting persisted near the capital. Skirmishes reported on the edge of the city suggested that small Russian units were trying to clear a path for the main forces.

Britain and the U.S. said the bulk of Russian forces were 19 miles (30 kilometers) from the center of the city.

With growing signs that Russia aims to overthrow him and his government, Ukranian President Volodymyr Zelenskyy called on Ukrainians to “stand firm.”

Kyiv Mayor Vitali Klitschko extended the city's curfew from 5 p.m. Saturday until 8 a.m. Monday to keep people indoors on Sunday. He said “all civilians on the street during the curfew will be considered members of the enemy’s sabotage and reconnaissance groups.”

ALLIES STEP UP TO AID UKRAINE

In a significant shift, Germany announced Saturday evening that it would send 1,000 anti-tank weapons and 500 “Stinger” surface-to-air missiles to Ukraine “as quickly as possible.” Those weapons are in addition to the 400 German-made anti-tank weapons Germany also approved to be shipped from the Netherlands, as well as 9 D-30 howitzers and ammunition from Estonia.

The Biden administration said it was sending Ukraine up to $350 million in arms and other defensive supplies from U.S. stockpiles, with another $250 million in defensive support possible. The Czech Republic also approved a plan to send more arms to Ukraine.

WHERE IS UKRAINE'S PRESIDENT?

Zelenskyy, Ukraine's president, has been posting video messages of himself and other national leaders in Kyiv since the invasion began on Thursday but his exact whereabouts were not publicly known.

Zelenskyy was urged early Saturday to evacuate Kyiv at the behest of the U.S. government but turned down the offer, according to a senior American intelligence official. The official quoted the president as saying “the fight is here” and that he needed anti-tank ammunition but “not a ride.”

Zelenskyy said Saturday that Russian attempts to forge into Kyiv have been repelled and Moscow’s plan to quickly seize the capital and install a puppet government had been thwarted.

“The real fighting for Kyiv is ongoing,” Zelenskyy said, accusing Russia in a video message of hitting infrastructure and civilian targets. “We will win.”

A respected Swiss newspaper is reporting that Zelenskyy asked his Swiss counterpart on Saturday to act as a neutral mediator between Ukraine and Russia, and help work toward a ceasefire between the two countries.

Daily Tages Angeizer said the request of Swiss President Ignazio Cassis came in the context of the upcoming Human Rights Council meeting in Geneva starting on Monday, at which Russian Foreign Minister Sergey Lavrov is scheduled to attend on Tuesday. The report was not immediately confirmed by the Swiss Foreign Ministry that Cassis also leads

RUSSIAN TROOPS MARCH ON IN UKRAINE

A senior U.S. defense official said the United States estimates that more than 50% of Russian combat power arrayed along Ukraine’s borders has entered Ukraine. That is up from a U.S. estimate Friday that one-third of the Russian force had been committed to the fight.

The official, who spoke on condition of anonymity to discuss internal U.S. assessments, would not say how many Russian troops that amounts to inside Ukraine, but the U.S. had estimated the total Russian force arrayed near Ukraine at more than 150,000.

Konashenkov claimed the Russian military has taken full control of the southern city of Melitopol, 35 kilometers (22 miles) inland from the Azov Sea coast, and said Russia-backed separatists have made significant gains in the eastern region of Donbas.

Russia claims its assault on Ukraine is aimed only at military targets, but bridges, schools and residential neighborhoods have been hit and civilians have been killed and injured during Europe’s largest ground war since World War II.

Ukrainian Health Minister Viktor Lyashko said Saturday that 198 people have been killed and more than 1,000 others have been wounded in the Russian offensive. It was not clear whether the figure included both military and civilians.

He said 1,115 other people, including 33 children, were wounded in the Russian invasion.

SOME UKRAINIANS FLEE TO SAFETY

U.N. officials said at least 150,000 people have fled Ukraine into Poland, Romania, Hungary and other neighboring countries and the number was going up fast as Ukrainians rushed to escape the deadly Russian onslaught. Some walked many miles through the night while others fled by train, car or bus, forming lines miles long at border crossings.

“Shabia Mantoo, spokeswoman of the U.N. High Commissioner for Refugees., said the situation is “very fluid and changing by the hour.”

The agency says up to 4 million Ukrainians could flee if the situation deteriorates.

PROTESTERS TURN OUT ACROSS THE GLOBE TO CRITICIZE RUSSIA

From Tokyo to London to Taipei, Ukrainians living abroad and hundreds of protesters around the world have turned out on the streets to show their support for Ukraine. Street protests, albeit small, resumed in the Russian capital of Moscow, the second-largest city of St. Petersburg and other cities Saturday as more and more Russians spoke out against the invasion — even as the government’s official rhetoric grew increasingly harsher.

In Taiwan, demonstrators chanting “Stand with Ukraine” and “Glory to Ukraine” protested outside the Russian representative office on Saturday.

Outside the Russian Embassy in an Athens suburb, protesters on Saturday chanted slogans and held posters with messages including “Russia go home,” “Putin burn in hell," and “We need your help, world!!!”

TURNING THE SANCTIONS SCREWS ON RUSSIA

The European Union’s top diplomat said he’s calling an urgent meeting of the bloc’s foreign ministers on Sunday to weigh yet more measures against Russia as it wages its military campaign in Ukraine.

The West has taken a military option in Ukraine off the table, but world leaders — with the exception of Moscow ally China — are preparing measures aimed at hurting the Russian economy and its leaders, including Russian President Vladimir Putin himself.

The United States, Canada and European allies all announced they are adding direct measures against Putin and his foreign minister, Sergey Lavrov. EU ministers have said even further sanctions were still possible, including booting Russia out of SWIFT, the dominant system for global financial transactions.

Russia on Saturday warned it could react by opting out of its last remaining nuclear arms pact and cutting diplomatic ties.

The deputy head of Russia’s Security Council, Dmitry Medvedev, said sanctions could offer Moscow a pretext for a review of its ties with the West, suggesting that Russia could cut them altogether. He also suggested that Russia could opt out of the New START nuclear arms control treaty that limits U.S. and Russian nuclear arsenals.

“We may look at each other in binoculars and gunsights,” he said.

SPORTING WORLD TURNS ITS BACK ON RUSSIA

Chelsea owner Roman Abramovich suddenly handed over the “stewardship and care” of the Premier League club to its charitable foundation trustees on Saturday, after a member of the British parliament called for the Russian billionaire to hand over the club in the wake of Russia’s invasion of Ukraine.

Abramovich, who has owned Chelsea since 2003, made no mention of the war in his statement.

Poland is refusing to play its World Cup qualifier against Russia next month, the Polish soccer president said Saturday. Sweden also declared that its national soccer team would not play against the Russians.

In addition, Russia has been stripped of hosting the May 28 Champions League final by UEFA w ith St. Petersburg replaced by Paris, and Formula One dropped this season’s Russian Grand Prix in Sochi in September.

The International Ski Federation announced Russia will not host any more of its World Cup events this winter, and the European curling championships will be relocated from Perm, Russia.

— Some bars and liquor stores are pulling Russian vodka off their shelves and promoting Ukrainian brands instead.

— Delta Air Lines has suspended its codesharing partnership with Russian national airline Aeroflot following Russia’s invasion of Ukraine. Atlanta-based Delta on Friday said its decision put a hold on the codesharing system allowing Delta and Aeroflot customers to book flights on both airlines.