Russians face more sports sanctions, but not at Paralympics 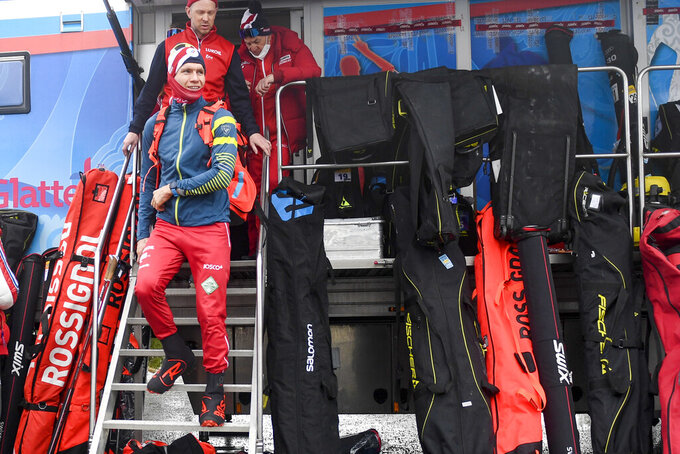 Russian cross-country skier Aleksandr Bolshunov, center, walks down steps after training at Holmenkollen, near Oslo, Tuesday March 1, 2022. Norway challenged a decision by the International Ski Federation to allow Russians to keep competing, and said it would block them from upcoming rounds of the World Cup that Norway hosts this week. (Annika Byrde/NTB scanpix via AP)

DÜSSELDORF, Germany (AP) — With the exception of the upcoming Paralympics, Russian athletes were restricted from competing in more sporting events around the world on Wednesday as owner Roman Abramovich put English Premier League club Chelsea up for sale.

Sports including biathlon and table tennis were among those to join more than a dozen other Olympic sports in excluding competitors from Russia and Belarus because of the invasion of Ukraine. The International Paralympic Committee, however, said Russians and Belarusians would be able to compete in Beijing as “neutral athletes” without national symbols.

Blanket bans have been imposed in soccer, track, basketball and hockey, among other sports, following an appeal from the International Olympic Committee to exclude Russians and Belarusians from international events.

The IOC, however, left open the possibility of allowing them to compete as neutral athletes if expulsion was not possible because of short notice.

The Winter Paralympics open Friday and numerous Russian athletes are already in the Chinese capital. The IPC has said it is working to get the Ukrainian team there, too.

“We fully respect this decision” by Paralympics leaders, IOC president Thomas Bach said Wednesday at an online briefing to explain its guidance to sports bodies.

Other sports bodies which have so far let Russians and Belarusians keep competing as neutral athletes include FINA, which governs swimming and other aquatic sports, and the federations for boxing, gymnastics, fencing and judo.

The International Judo Federation, which listed Russian president and former judoka Vladimir Putin as its “honorary president” until last week, argued Wednesday that the IOC's push to exclude Russia and Belarus “is not considered to be justified" because it would lead to resentment.

“Any radical decision to obstruct the participation of athletes in sporting competitions would only continue the escalation of violence and nurture the feeling of injustice for those athletes who did not participate in any decision regarding the conflict,” the IJF said.

Abramovich, the Russian billionaire businessman, put Chelsea up for sale in a statement on the club website Wednesday, vowing to invest profits from the sale in a fund for victims of the war in Ukraine. The British government has faced calls to place sanctions on Abramovich along with other wealthy Russians.

The restrictions on athletes and teams have been strongly criticized by Russian politicians and on Wednesday by striker Artem Dzyuba, the top scorer for the Russian national soccer team.

The Zenit St. Petersburg player wrote on Instagram that he is “against any war. War is terrible.” But he added he found sporting sanctions a form of discrimination.

“I am against discrimination based on nationality," Dzyuba wrote. "I'm not ashamed to be Russian. I am proud to be Russian. And I don't understand why athletes have to suffer now.”

The governing body for British motorsports banned Russians from competing at events in the country, throwing into doubt Formula One driver Nikita Mazepin's ability to race in the British Grand Prix in July.

The sport's international governing body, known as FIA, had said Tuesday that Russian drivers like Mazepin can still compete but a block on having cars in national colors would stop his team, Haas, from bringing back the Russian flag-stripe livery it removed during last week’s testing.

Motorsport UK went further, with sanctions barring drivers and teams from Russia and Belarus from competing anywhere in Britain. The FIA didn't immediately respond to a request for comment on what it would do when its rules conflict with those of national governing bodies.

The junior Canadian Hockey League has canceled its annual Canada-Russia series but has not yet decided about banning Russian and Belarusian players from its international draft. The CHL said in a statement that a format for its import draft will be decided at a later date.

The invasion of Ukraine has also led to a reshaping of sports' corporate ties to Russia. English soccer club Everton ended its sponsorship with companies belonging to Alisher Usmanov, a Russian billionaire who was placed under European Union sanctions last week.

Premier League games this weekend will be preceded by a show of solidarity toward Ukraine, with captains also wearing armbands in the blue and yellow of the country's flag.

Video game publisher EA Sports announced it would remove Russian clubs and the national team from its hugely popular FIFA series, and would remove the Russia and Belarus hockey teams from its NHL series.

There has also been an exodus of foreign players and coaches at Russian sports teams. Former Norwich manager Daniel Farke quit as coach of Russian soccer club FC Krasnodar on Wednesday, a day after Markus Gisdol left as coach of Lokomotiv Moscow. Defender Yaroslav Rakitskiy, who played for Ukraine at two European Championships, canceled his contract with Zenit on Wednesday for what the club said were family reasons.