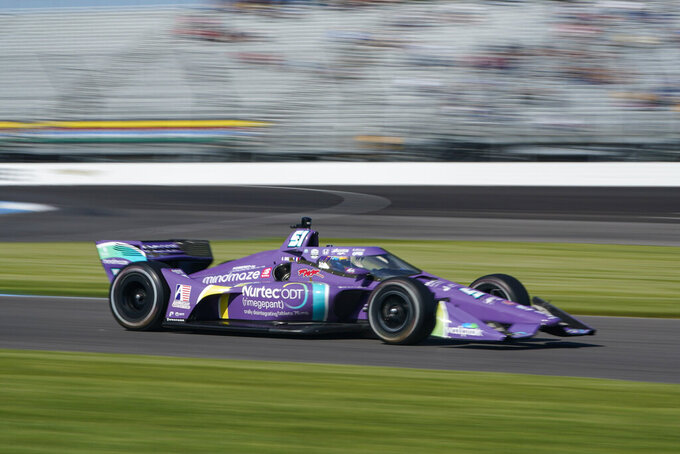 Romain Grosjean of Switzerland drives during practice for the IndyCar auto race at Indianapolis Motor Speedway in Indianapolis, Friday, May 14, 2021. (AP Photo/Michael Conroy)

INDIANAPOLIS (AP) — Romain Grosjean survived a fiery Formula One crash, then left the series behind for a move to IndyCar where he figured he might compete for wins after nearly a decade of driving cars that never had a chance.

Now he seems right at home in America.

In just his third race with Dale Coyne Racing, Grosjean will lead a 25-car field to the yard of bricks Saturday in the Indianapolis Grand Prix. He turned a lap of 1 minute, 9.4396 seconds around the Indianapolis Motor Speedway road course Friday to beat two-time IndyCar champion Josef Newgarden.

It's the 35-year-old Frenchman's first pole since a 2011 GP2 Series race in Turkey and he celebrated flexing his arms in joy when he pulled into pit lane.

“It's like being alive again,” Grosjean said. “That feeling, whoa! I forgot what it was, actually. Amazing."

Jack Harvey will start third for Michael Shank Racing after a surprising qualifying session in which defending race winner Scott Dixon did not advance out of the first round. Dixon also struggled in the second practice session because of a problematic clutch.

“It was a mixed up grid,” Newgarden said. “I was really surprised where some people qualified.”

Grosjean missed the final two races of last year's F1 season after a harrowing November crash in Bahrain in which he pulled himself from a fireball of wreckage. He has said the halo cockpit protector likely saved his life, and he suffered severe burns that left scarring on his hands.

He knew even before the crash he was not being retained by American team Haas, and Grosjean had already turned his sights to IndyCar because he was tired of running in a series where the quality of the car wasn't all that mattered.

While Coyne is not an IndyCar heavyweight, Grosjean produced finishes of 10th and 13th in his first two races.

“I've started looking for houses in America," he said when asked if the IndyCar Series could become a permanent destination. “That's the answer you want."

If he continues stringing together strong results, he'll get many more opportunities — starting Saturday as he chases his first podium finish since 2015 and his biggest victory since winning the GP2 Series title in 2011.

“I love the atmosphere between the drivers, I love the tracks," Grosjean said. “The cars are fun to drive. We can go for some good stuff. I’m really happy."

Juan Pablo Montoya and Jimmie Johnson are familiar faces around the speedway. They just find themselves in different roles this year.

Montoya, a two-time Indianapolis 500 winner, is seeking his first win on the track's road course and in his first IndyCar race since 2017. He will start last in the 25-car field because his two fastest laps were thrown out for interference.

Johnson, meanwhile, is a seven-time NASCAR champion and four-time Brickyard 400 winner. While he'll make his third IndyCar start Saturday, Johnson isn't one of the race-day favorites and he knows it. Johnson is starting 23rd.

“I'm not in the game yet so at least now I'm under less pressure than I have been in the past," the 45-year-old Johnson said. “It's my rookie year and there's very little testing."

There is no feud, per se, between Graham Rahal and Harvey but the two certainly had to clear the air following a disagreement at Texas Motor Speedway earlier this month.

Rahal wasn’t pleased with how Harvey raced that day and said he planned to have a “man-to-man talk” with the driver. Harvey then grumbled competitors often race his Michael Shank Racing entry with a “part-time, small-team attitude and think they can just do whatever, anytime.”

Shank, the team's co-owner, backed Harvey this week and said his team would not be pushed around.

That led Rahal to note the Shank team is aligned with powerhouse Andretti Autosport and Harvey has made legitimate inroads.

“They can talk big all they want, ‘Guys like Graham still think I’m a part-timer.’ That’s a complete lie," Rahal said. "Mike Shank is part of Andretti (Autosport). We know they’re a serious contender week in and week out. They can come off and try to be tough if they want. They’re a great competitor. No one is trying to push him around. That’s not what this is about.”

Rahal said the problem he has is with race control and Harvey was too aggressive at Texas — something series officials could have managed from the tower.

“This is about the consistency of officiating, doing the right things, not killing anybody,” Rahal said. “For me that was the conversation. It was just, ‘Hey, you know, we can’t be doing that.’ He agreed. Jack is a good dude, stand-up guy. So is Mike. Nobody is trying to push him around, trying to say they’re part-time. That’s long gone. We know they’re serious contenders. We know they’re going to be fast this month.”