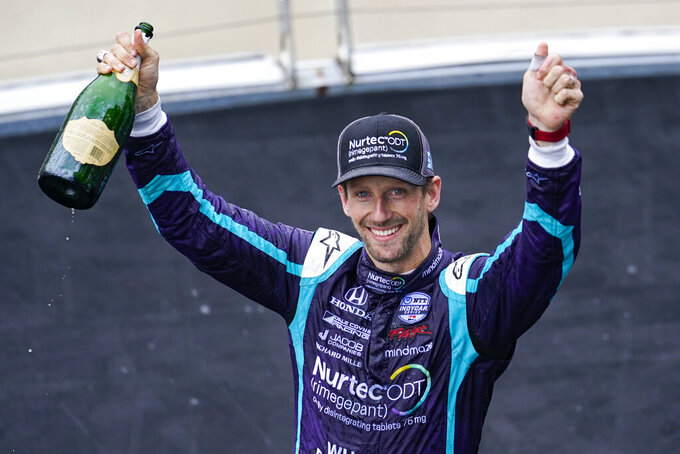 The Dutchman became the third first-time winner through five races this season, the most at this point in the season since 2013.

“I have never cried before when I won a race, but I did today,” said VeeKay, who vowed to eat a cheesecake — perhaps the whole thing — in celebration.

The 20-year-old is the fourth winner 24 or younger to reach victory lane this season, joining Alex Palou, Colton Herta, and Pato O’Ward in what is quickly becoming a changing of the guard in IndyCar.

Only six-time IndyCar champion Scott Dixon has been to victory lane so far this year for the veterans as the series heads next week into preparations for the Indianapolis 500.

But it is VeeKay who now believes he can win the 500. He drives for local team Ed Carpenter Racing, a Chevy-powered organization that has put team owner Carpenter on the pole for the 500 three times.

“They were already like super motivated, but I’m pretty sure now for the 500 everyone is just going to be next-level motivated,” VeeKay said. “I know we have a good 500 car, good oval car, I think we can really, really do well. I feel super confident.”

VeeKay is so confident that he already knows should he win the 500 he'd like a bottle of whole milk. Not because it is his first choice — that would be buttermilk — but because he liked the way it looked in 2019 winner Simon Pagenaud's photos.

“I saw the photo of Simon pouring milk on his face, and I think the whole milk gives the nice thick layer of milk, which I like,” he said.

His win Saturday was the first for ECR since Josef Newgarden won for the team in 2016. Newgarden has since moved to Team Penske and won two IndyCar championships.

VeeKay, meanwhile, has climbed through the IndyCar development system and is the first driver to win at all four levels of the Road to Indy program. He won six races in Indy Lights in 2019, seven races and the Indy Pro 2000 championship in 2018 and three races in USF2000 in 2017.

Mentored by two-time Indy 500 winner and fellow Dutchman Arie Luyendyk, VeeKay is the first Dutch winner in IndyCar since Robert Doornbos won a pair of CART races in 2007. He lives on Main Street in Speedway across the street from the track and rides his bike to work each day.

“I live like right next door, so every day I wake up, open the curtains and I see the grandstands of the racetrack,” he said. “It's just the perfect day at the most perfect place on earth.”

VeeKay sliced through the center of Palou and Jimmie Johnson on a gutsy three-wide pass to show early how aggressive he was at Indy and then chased down pole-sitter Romain Grosjean to take his first lead of the race on Lap 45.

Grosjean reclaimed the lead when VeeKay pitted, setting up a potential second showdown. But this time Grosjean was not able to beat VeeKay off pit road and VeeKay was easily past Grosjean before Grosjean got back onto track.

VeeKay beat him to the finish line by nearly 5 seconds.

Grosjean led a race-high 44 laps and finished second for his first podium finish since 2015 in Formula One. The Frenchman survived a fiery crash in Bahrain last November that left him with severe scarring on his hands and marked the end of his F1 career.

He won the pole for the race in just his third IndyCar start — his first pole in 10 years — and the crowd at Indy cheered at the fence for him following his finish.

“Bahrain was horrible but for my life it’s been a great experience and people are really behind me and I can feel it,” Grosjean said. “The support I am having is incredible. You’ve only seen me smiling here in the U.S. and we are happy to be racing here.”

“Leading races, that’s what I came for," he said.