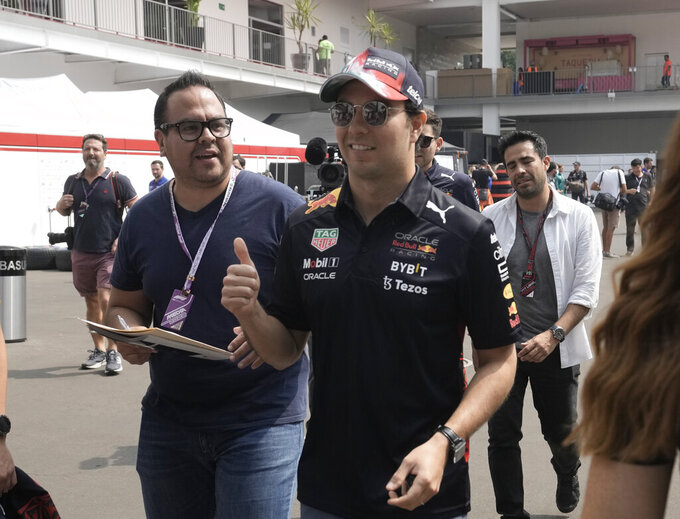 Red Bull driver Sergio Perez, of Mexico, flashes a thumbs up upon his arrival for the first day of the Formula One Mexico Grand Prix at the Hermanos Rodriguez racetrack in Mexico City, Thursday, Oct. 27, 2022. (AP Photo/Moises Castillo)

MEXICO CITY (AP) — Sergio Perez walked into the Formula One paddock Thursday and was quickly surrounded by adoring fans so hopeful he'll become the first Mexican to win on his home track.

The reception was nothing like the one he received earlier this week when the Red Bull driver did a demonstration run in Guadalajara in front of “about 140,000 people, so for Mexico, not that much.”

Perez called it an emotional memory that will stick with him forever.

What would bump it down a notch on his list of accomplishments? A victory on Sunday in the Mexico City Grand Prix. Perez finished a career-best third at the Autodromo Hermanos Rodriguez a year ago and was celebrated as if he'd won the actual race.

“Of course I want to win this weekend, that is my target,” Perez said. “But it has already been such a special week for me taking the Red Bull Showrun to my hometown, it’s a memory that will live with me forever. I don’t want to stop there with creating moments this week though, my aim is to win my home Grand Prix and I know I have the car and the team to do it.

Only problem? His teammate, two-time F1 champion Max Verstappen, has no intention of allowing Perez to take the checkered flag.

Verstappen, who clinched his second consecutive title earlier this month and then led Red Bull to the constructor's championship last week, is seeking a 14th victory Sunday that would break the record for wins in a season he shares with Michael Schumacher and Sebastian Vettel.

Verstappen has won seven of the last eight races, a streak stopped only by Perez himself with a win in Singapore earlier this month. It gives Red Bull an eight-race winning streak and Verstappen isn't hiding that he wants to keep winning and doesn't much care if it spoils his teammates homecoming.

“I am here to win,” Verstappen said Thursday. “I want to win like every race we enter, and we have an opportunity to win more. As a team we just want to have a good weekend."

But the final three races are important for Perez, who heads into Sunday trailing Charles Leclerc of Ferrari by only two points for second in the standings. It gives Red Bull a chance to go 1-2 in the final standings of a season it has totally dominated.

“He knows what he has to do to finish a second, he has to finish ahead of Charles,” Verstappen said. “As a team, we always try to be first and second and as a driver, I want to win more races.”

It all comes ahead of an expected Friday ruling by the FIA on what Red Bull's punishment will be for overspending the F1 cost cap last year when Verstappen won his first title. Rival teams have called for crippling penalties — anything from stripping last year's title from Verstappen to reducing the amount overspent from future Red Bull budgets.

Paddock speculation Thursday seemed to indicate Red Bull will receive a monetary fine less than $10 million and a reduction in 2023 wind tunnel time. The saga has been exhausting as Red Bull boss Christian Horner, who was not at the track Thursday, has vehemently argued the team did not truly breach the regulations.

“It's just a bit frustrating, from our side we feel we are not wrong, just some things taken into the budget cap that were not expected,” Verstappen said in advance of the penalty. “We'll have to deal with it.”