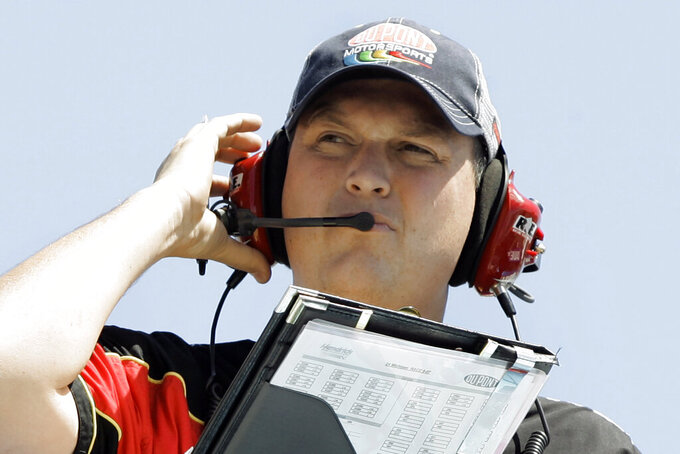 FILE - In this Aug. 17, 2007, file photo, crew chief Steve Letarte watches Jeff Gordon during practice for the NASCAR 3M Performance 400 at Michigan International Speedway in Brooklyn, Mich., in this Friday, Aug. 17, 2007, file photo. NBC analyst Steve Letarte moonlights as the competition consultant for Spire Motorsports, a position he never imagined would put him back on top of a pit box. When COVID-19 protocols sidelined the regular crew chief, Letarte agreed to get back on top of a pit box Sunday, Feb. 28, 2021, at Homestead-Miami Speedway. He'll call the race for Corey LaJoie, his first time as crew chief since the 2014 season finale. (AP Photo/Paul Sancya, File)

CHARLOTTE, N.C. (AP) — NBC analyst Steve Letarte moonlights as the competition consultant for Spire Motorsports, a position he never imagined would put him back on top of a pit box.

Then COVID-19 protocols sidelined Spire crew chief Ryan Sparks and two other team members for Sunday's race at Homestead-Miami Speedway. Letarte was brainstorming solutions for Spire when his wife stated the obvious.

“Why don't you just do it? Why are you making this so complicated?” she told Letarte.

She had a point.

Letarte will return to competition Sunday for the first time since he called the 2014 season finale for Dale Earnhardt Jr. That race capped a 19-year career with Hendrick Motorsports, where Letarte started as a teenager sweeping floors before graduating to crew chief for Jeff Gordon and then Earnhardt.

Letarte will call the race for Corey LaJoie and the No. 7 Chevrolet but is hesitant to take the title of crew chief.

“I'm not a crew chief. I'm a TV analyst who has crew chief experience who is going to fill in for one race on one day,” Letarte said Thursday. “It's Ryan's team, it's Ryan's car, it's Ryan's setup. All I'm really doing is managing the day and managing the race for Corey.”

Letarte was still considered a top crew chief when he retired after nine seasons. He took a job with NBC Sports for the lighter workload and has successfully transitioned into one of NASCAR's top analysts. The preparation he puts in to dissect races on television has prepared Letarte to get back into action after a five-year hiatus.

“My work in the broadcast booth requires me to stay sharp when it comes to rules, regulations, race flow,” he said. “My job is to analyze the performance of people on pit road, so I think I'm comfortable with race strategy.”

Homestead isn't the most technical of tracks and its a no-brainer for a crew chief to call for four fresh tires during a caution period. For the difficult decisions, Letarte will have electronic communication with Sparks. He will rely on gut instinct but largely try to stick to Sparks' plan.

LaJoie is in his first season with Spire and he opened with a ninth-place finish in the Daytona 500. Though Letarte is consulting the organization as it attempts to grow, he said he's had “zero” involvement in day-to-day operations.

Letarte doesn't plan to make any bold in-race adjustments to the Chevrolet or fall back on strategies that worked for a combined 15 victories with Gordon and Earnhardt.

“It's been six years. The sport moves weekly, monthly, yearly, it moves so fast,” Letarte said. "The most important thing is just to make sure I don't create any storylines. Be very calm on the radio, be very clear with my direction, be very clear with Corey. Not do anything silly. Just do a nice, solid block-and-tackle type job.”

When the race ends Sunday, Letarte will return his focus to his NBC gig and assisting Spire, which is aiming to be a two-car Cup Series organization in 2022 when the Next Gen car debuts and has taken steps to become an independent organization this year.

Spire bought cars and engines from both Hendrick and Chip Ganassi Racing, moved into its own shop and gave LaJoie a three-year contract. Letarte has enjoyed advising Spire through the process, which he believes includes filling in Sunday as crew chief.

“This Sunday is just a small snapshot of what the whole concept is — I have the opportunity to help Spire build their program and Spire gives back to me because they help me stay as in-touch with the sport as I can,” Letarte said.