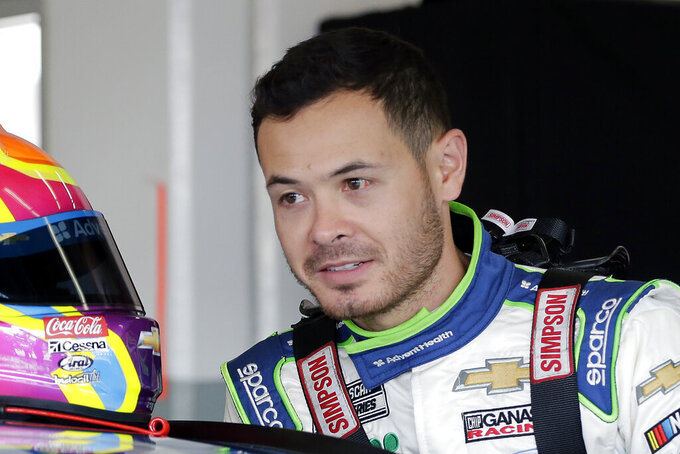 FILE - In this Feb, 8, 2020, file photo, Kyle Larson climbs into his car as he gets ready for a NASCAR auto race practice at Daytona International Speedway, in Daytona Beach, Fla. Despite being suspended for six months for the use of a racial slur, Kyle Larson remains a popular figure in dirt track racing. (AP Photo/Terry Renna, File)

So he wasn’t going to miss out on purchasing a long sleeve shirt with Larson’s name on it to bring home. Standing outside Larson's merchandise trailer in this community a short drive northeast of Charlotte, he proudly held up the shirt that read: “When life gives you lemons, just keep winning.”

“I just think he’s a really good guy,” said Reed, from Hanover, Pennsylvania. “He’s fan friendly. He always stays after the races to give everybody their autographs.”

Reed, like many race fan, has forgiven Larson for his use the n-word during a virtual race earlier this year. Larson lost his ride and was suspended by NASCAR, and he spent months working with others to realize and learn from his mistake. It paid off: Larson is r eturning to the Cup Series next year after signing on to drive with NASCAR power Hendrick Motorsports.

The line at Larson's merchandise trailer at The Dirt Track at Charlotte this past weekend was longer than all of the other drivers combined. Just across the street from Charlotte Motor Speedway, fans came to buy Larson shirts, hats and coffee mugs, and watch him become the first driver since 2016 to compete in both World of Outlaws late models and sprint cars, his true love.

“I think with Kyle going back to NASCAR next year I have a lot of people coming by and just wanting to get some dirt track stuff," said Patrick McGarey, one of the vendors. “They think they won’t see him again, but I’m sure they will.”

The 28-year-old Larson has promised dirt track fans as much.

As part of his agreement with Hendrick, Larson has been given permission to race dirt tracks next season when it doesn't conflict with his NASCAR schedule.

“Everybody knows that dirt racing is important to me and continuing to do that is important to me,” Larson said. "I’m thankful that they are letting me still run dirt stuff. With the schedule being a little more open like it was this year, I’ll have plenty of opportunities to get my fun in and stay sharp and continue to become a better race car driver.”

Team owner Rick Hendrick expressed some concern about Larson getting injured, but also realizes the driver wouldn't be happy without it. He also said it keeps Larson's driving skills at a high level.

“This is his love,” Hendrick said. "So, as long as it doesn’t interfere with the NASCAR team, then I’m okay. As long as we get in the championship run and he’s 100% committed to his job here; as long as he can do that and race the dirt, too, it’s okay.”

Dalton Hughes, a race fan from Boyertown, Pennsylvania, is thrilled to hear that.

“For me I think he’s different than everyone else," Hughes said. "The way he drives a dirt car, it’s something different and it’s exciting.”

Jason Hagenbuch, a former dirt track driver from Pennsylvania, said he came to the track to watch Larson run because also loves the way he attacks the course.

“He's very fluid,” said Hagenbuch. "He's a true driver, whether that is dirt, asphalt, whatever. As for (the racial slur), everybody makes mistakes and that is understandable in today's world. You've got to give guys a second chance.”

And fans apparently have.

When Larson raced dirt tracks for the first time in the Dakotas earlier this year, he said the line stretched further than he could see and he and his staff were selling items non-stop for six straight hours.

It helps that Larson has been winning at nearly every level all year long after his suspension.

“Kyle made a mistake, but he held up to it,” McGarey said. “He has worked really hard to better himself. I'm really proud of him for all he has done and all he's try to do on his own to better himself. Kyle is a really great person and it's good that people give him a second chance. I think everybody will — and he will come out on top.”