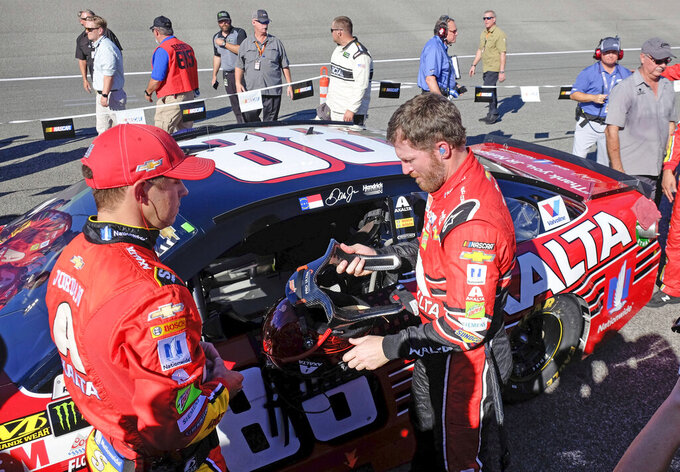 FILE - In this Nov. 19, 2017, file photo, Dale Earnhardt Jr., front right, prepares to climb into his race car before a NASCAR Cup Series auto race at Homestead-Miami Speedway in Homestead, Fla. Dale Earnhardt Jr. is returning to the track Saturday, June 13, 2020, getting behind the wheel for an Xfinity race at Homestead-Miami Speedway -- the place where his Cup Series career ended three years ago. (AP Photo/Gaston De Cardenas, File) 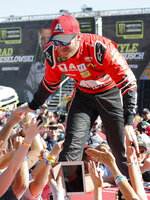 MIAMI (AP) — Dale Earnhardt Jr. has a plan for Saturday, one unlike any other he’s had in more than two decades of getting behind the wheel at NASCAR events.

He’s going to fly to Homestead-Miami Speedway and arrive in the early afternoon. He’ll go through a health screening, then sit in a rental car instead of the custom RV that usually serves as his home away from home on race days. He’ll change into driver gear, hop into his race car about 10 minutes before the flag drops and, without the benefit of any practice, hope for the best.

“I’m experiencing this for the first time,” Earnhardt Jr. said on his podcast this week.

Once that engine fires up, things should seem normal again for Earnhardt Jr., who will take to the Homestead track Saturday for the first time since his NASCAR Cup Series career ended. He’s in the field for one of the two Xfinity Series races at Homestead this weekend, his third start in an Xfinity car since retiring.

It’s been a one-Xfinity-race-a-year comeback so far for Earnhardt Jr., who was NASCAR’s most popular driver in 15 consecutive seasons and automatically would have been a fan favorite at Homestead this weekend — if, of course, fans were going to be at the track Saturday. There will be 1,000 South Florida-based members of the military in the stands for the Cup Series race on Sunday, the first time anyone will be cheering on that side of a NASCAR track since the pandemic began.

But on Saturday, the only fans watching Earnhardt Jr. in the No. 8 car again will be viewing on television.

“I haven’t had a lot of opportunities to really sit in the car, drive the car, understand if it’s comfortable, if there’s anything wrong, if the mirror’s in the right place or all those little things that you’d like to take care of during the first few practices,” Earnhardt Jr. said.

His past two post-retirement Xfinity appearances went well: Earnhardt Jr. was fourth in a race at Richmond in 2018, and fifth in a race at Darlington last year.

And now he returns to Homestead, looking to get the feeling back again, if only for a couple hours. When it’s over, his plan is to just fly back home.

“That’s really the only reason why I would even run these races at this particular point in my life, is to just sort of remember the sights and the sounds and the smells,” Earnhardt Jr. said.