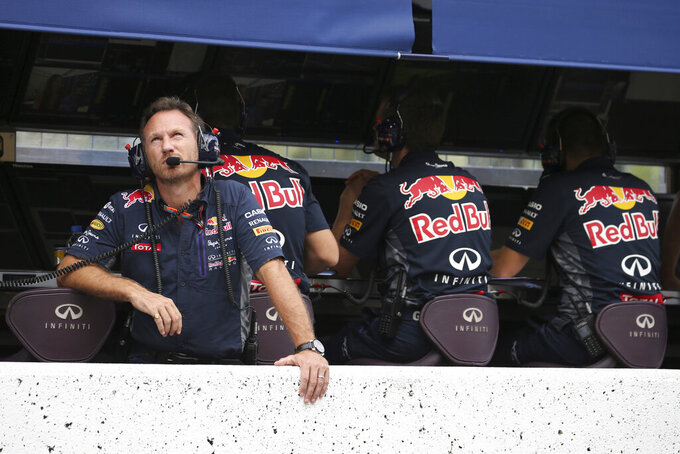 FILE - Red Bull Racing Team principal Christian Horner looks up during the qualifying session for the Japanese Formula One Grand Prix at the Suzuka Circuit in Suzuka, central Japan, Sept. 26, 2015. The Red Bull Formula One team has secured a new title sponsorship worth around $500 million with technology firm Oracle, placing it among the most lucrative commercial deals in sports. The five-year deal is a lift to the team ahead of the season beginning next month when Max Verstappen will be looking to defend his world title in a new Oracle Red Bull Racing car that was also revealed on Wednesday Feb. 9, 2022. (Yuriko Nakao/Pool via AP, file)

The team principals sat side by side Wednesday on the first day of preseason testing in Spain in a far more congenial atmosphere compared to the season-ending Abu Dhabi Grand Prix. Tensions between them got so bad in 2021 that they traded barbs in the weeks before Abu Dhabi's last-lap mayhem.

“We share a difference of opinion over Abu Dhabi, but that's done and dusted," Red Bull boss Horner said. "I think what you did see last year was a fantastic competition. That's been a key part of Formula One's revival in terms of popularity. We hope there's going to be an equally exciting year ... ideally a little less exciting at times.”

Wolff agrees with Horner that enough is enough.

“We need to move on. There’s been so much talk about Abu Dhabi that it came to a point that it is really damaging (for F1)," the Mercedes leader said. "We’ve closed the chapter.”

The 2021 title hinged on a key decision from then-race director Michael Masi, who has since been removed, prompting confusion and vitriol in some quarters.

Verstappen then zoomed past Hamilton on fresh tires. Mercedes lost both protests before eventually withdrawing an appeal that could have dragged into this season.

“I think we need professionalism in the stewards’ room,” Wolff said. “(What) we talked about last year was the topic of inconsistency. There shouldn’t be room to interpret the rules.”

Wolff and Horner disputed this.

“I don't think there is a conscious bias," Wolff said. ”(But) there needs to be a standard, this is what we deserve and what everybody expects."

“I don't think there's an intended bias. I'm not aware of any stewards traveling with drivers to races," he said. “We’ve all been on the receiving end of stewards’ decisions that we’ve been unhappy about."

Horner wants greater clarity on what's acceptable when a driver goes off track limits, with differing versions in 2021.

“A lot of the issues are to do with the regulations themselves, because you've got very complicated regulations that leave room for interpretation. Circuit limits is an an obvious one. In any other sport, being over a white line you're out,” Horner said. “You have a situation where (on) some corners it's OK, some corners it isn't. I think for the fans, even for the teams and the drivers, it's confusing.”