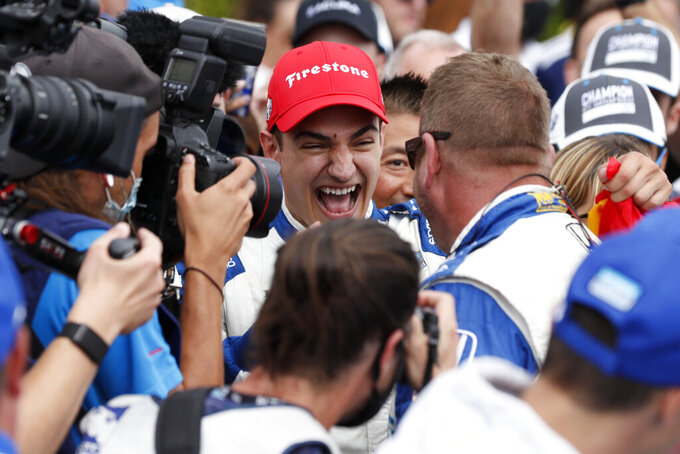 Alex Palou used to post notes on his bathroom mirror as a daily affirmation that he could someday drive for Chip Ganassi in the IndyCar Series.

And when he crossed paths with the team owner during preparations for the Indianapolis 500, the IndyCar rookie introduced himself to Ganassi in hopes of landing on his radar. Ganassi surprised Palou that day just 13 months ago by offering the driver advice that Palou found himself following during the race.

It was all meant to be, Palou will tell you, because IndyCar's earnest new champion truly believes everything happens for a reason. He worked hard, followed an untraditional racing path and, with nothing to lose, he visualized his biggest dreams.

Ok, so maybe he didn't visualize himself driving a bright yellow “Chicken Limo” adorned with an oversized fake chicken head and tail around Indianapolis Motor Speedway. Yet that was the perk Wednesday for the fried chicken-loving champion during his weeklong victory tour.

It was August 2020 at empty Indianapolis when Palou first introduced himself to Ganassi. Now, he's the sixth champion for IndyCar's powerhouse team, giving Ganassi his 14th title and on the 25th anniversary of its first championship with Jimmy Vasser.

Palou on Sunday became the first Spaniard to win the IndyCar championship, the youngest champion since 2003 and the first Ganassi champion since Juan Pablo Montoya in 1999 not named Franchitti or Dixon. That duo won nine titles from 2008 through last season.

So who is this Catalan who arrived in IndyCar via Japan just ahead of last year's pandemic-challenged season? And how did he parlay one season with an underfunded team into the job he wanted so badly that he left a note to himself each morning?

A LOOK AT ALEX PALOU

Palou is 24 and just completed his second year racing IndyCar, but carries himself with the poise and professional of a steely veteran. On a team stacked with Scott Dixon, Marcus Ericsson, Jimmie Johnson and Tony Kanaan, he's their happy kid brother so pleased to be part of the gang. Everything “is amazing” to Palou and every day is a good day, and the sponge for information has a question for everyone.

As he beat Dixon all season long — Palou is the first Ganassi driver to outrun the six-time champion in a decade — Dixon could have made life difficult on his new teammate down the stretch. But Dixon has been impressed with him, and Johnson, a seven-time NASCAR champion, couldn't name another driver he'd ever seen at such a high level this early in his career.

“The progression was strong from the get-go. It's been veteran-like,” Dixon said of Palou. “He definitely asks a lot of questions. He’s not shy to ask questions. He soaks it up and he processes it very well. The speed is what you need most. Sometimes you need to contain that and make sure it turns into results and not crashes. He does that very well.”

At 24 years old, Palou is the oldest in a quartet of young new IndyCar drivers who won races this season. All four are very different, but from the start two-time champion Josef Newgarden found Palou to be the gem in the rough.

Newgarden credits Palou's offseason move from Dale Coyne Racing into a prized Ganassi seat — the No. 10 opened when Felix Rosenqvist left to drive for Arrow McLaren SP — for giving Palou the resources needed to win three races and score eight podium finishes, both IndyCar highs. But Palou was polished after racing in various European series, as well as two years of Super Formula in Japan.

“He’s done the job, clearly. He’s been solid all year,” Newgarden said. “I said earlier in the year, I think from the young crop of drivers he looks the most complete. Seems to be very Dixon-esque in a lot of ways. Scott has been sort of the measure over the last couple decades of how you be a champion. Alex seems to embody that pretty well.”

Palou was born in Spain to teenage parents, and his father, Ramon, is younger than 46-year-old teammates Johnson and Kanaan. His family is close and his hoodie-clad father could maybe pass for an older brother when Palou is in street clothes alongside his dad.

Palou's Spanish girlfriend says she's 11 years younger than his father, and the two have been dating since he was 17. When her friends expressed shock at her new boyfriend's age, Esther Valle assured them Palou was wise beyond his years. And on a vacation together in Girona, Spain, the coffee lovers found a void of trendy shops and have owned and operated “Coffee & Greens” together the last three years.

Well, Valle has run it while Palou has raced, but his career took off this year and during IndyCar's summer break she packed all their belongings in Spain and officially moved them fulltime to Indiana. They close on the sale of the coffee shop next week.

“I wrote this note on a dollar bill that said, ‘One day we will move to the U.S.,’ and that was like five years ago,” Valle said. “I wrote it and he kept it in his wallet forever.”

HE WAS NOT AN ALONSO FAN

Palou is the first IndyCar champion from Spain, but the country has produced racing greats before, most recently former Formula One champion Fernando Alonso and current Ferrari driver Carlos Sainz.

But he never cheered for Alonso, he said. He instead preferred the great Michael Schumacher and has already consumed the Netflix documentary on the German champion that was released with two races remaining in his IndyCar title pursuit.

“It was a bit sad,” Palou says, his perma-smile and positive attitude set aside for a brief moment. “That's the last part of him that we're going to get, right? They could have done 10 chapters on him and it's all just a bit sad.”

WHAT ABOUT THE CHICKEN?

Palou, as it turned out following his first career victory in the IndyCar season-opener, celebrates his victories by eating fried chicken. He follows a strict athlete's routine of diet and exercise, and the friend chicken is treated as a very special treat.

Where did it start? When he was racing with his father as a child, he won, and the two literally followed the “Winner, Winner, Chicken Dinner,” mantra. Now it's his thing and he's had it twice since winning the championship on Sunday.

Palou took the Astor Cup to Roscoe's House of Chicken N' Waffle i n Los Angeles, and on Wednesday drove the Chicken Limo to The Eagle on Mass Ave in downtown Indy.

If IndyCar decides to serve fried chicken at Friday night's awards ceremony, he'll probably eat it there, too.