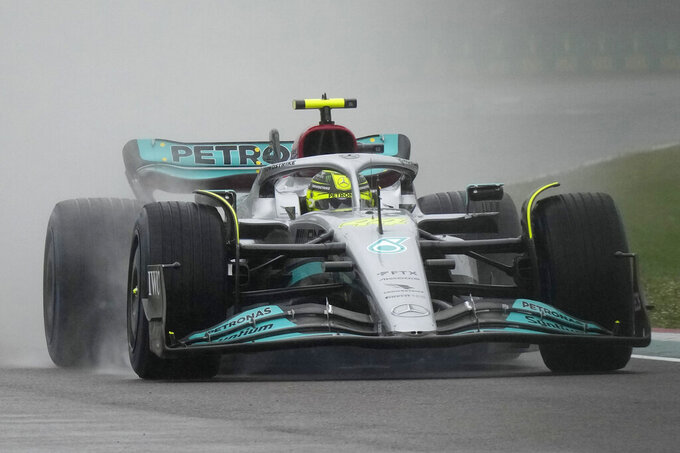 That was part of Formula One driver Lewis Hamilton’s thinking when he joined a consortium that is bidding to buy Chelsea.

Ahead of this weekend’s Emilia-Romagna Grand Prix, the British driver — a longtime fan of rival London team Arsenal — spoke of his passion for the game since he was a young child.

“When I was younger, I was trying to be the best player I could be and actually play for a team … but then I ended up following racing. As a kid, I could have only ever dreamed of being part of a team and an actual integral part of a team, so that’s for me one of the most exciting things.”

The bid — one of three that is still in the running to buy the club — is being fronted by former Liverpool and British Airways chairman Martin Broughton and World Athletics president Sebastian Coe.

And Hamilton said it was Broughton who persuaded him to join the consortium.

“Well, naturally I heard about it in the news, everyone’s obviously aware of it. And yeah, we were contacted and Sir Martin spoke to me on the phone and explained his and his team’s goals for if they were to win the bid, which was incredibly exciting and it was very much aligned with my values,” the seven-time world champion said.

Hamilton, in turn, helped convince Williams — who is a minority stakeholder in the Miami Dolphins NFL team.

“We spoke multiple times. Serena and I are very close, so we’re constantly in touch,” he said. “You know, she’s a phenomenal athlete and woman.

“We spoke about it, she asked me what my thoughts were on it. And I told her that I’m going to be a part of it, and she was excited to join.”

Of the two other consortiums bidding for Chelsea, one is spearheaded by American businessman Todd Boehly, the part-owner of the Los Angeles Dodgers, and the other by Boston Celtics co-owner Steve Pagliuca and Canadian businessman Larry Tanenbaum.

A New York-based merchant bank, the Raine Group, has been overseeing the sale process, which was launched by Abramovich last month following Russia’s invasion of Ukraine. The oligarch has since been sanctioned by Britain and the European Union over his links to Russian President Vladimir Putin with assets frozen, including Chelsea.

Hamilton stressed that the consortium he is part of is not sure of emerging victorious. But he said that if they do win, they already have some plans in place of how they are going to take the soccer club forward.

One of those is promoting diversity. Hamilton, the only Black driver in F1, has long used his celebrity status to become an activist against racism.

“The part that we’re all very aligned in is DNI (diversity and inclusion), for example, and what they (the club) have already done there,” Hamilton said. “You’re seeing that in the sport, there is still a lot of work to be done to being more diverse and more inclusive.

“It’s an amazing platform to bring in and educate a lot of the amazing fans that are out there. And there’s some amazing talent within the team already that have really stood up against discrimination and worked very closely with the organization to move forward. And I know that’s really important for, I think, the fans of Chelsea.”

But currently for Hamilton, there’s an F1 career to focus on as he tries to regain the title he lost to Max Verstappen last season.

“Well at the moment my primary focus is as continuing in Formula One and this isn’t my first business venture or investment,” the Mercedes driver said. “But yeah it’s something that I’m excited about.

“I would say early on, I’m for sure not going to be able to be hands on as the other people that are a part of it. But if we do win it there’s lots of opportunity to get involved more and more over time, which is super exciting and particularly beyond racing, wanting to help with the success they’ve already had and help it be even more successful.”