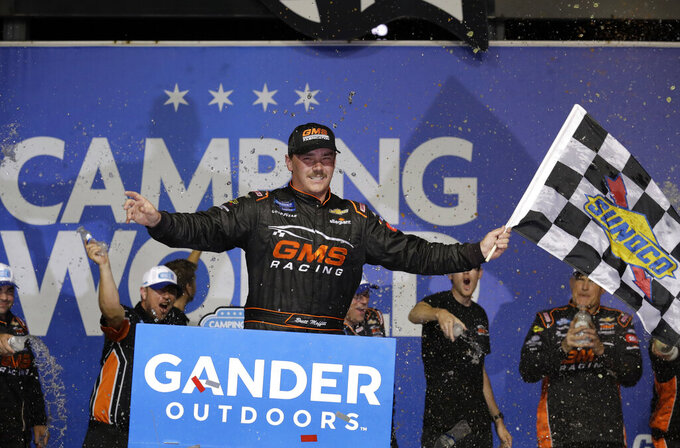 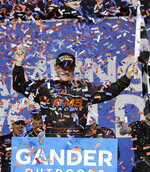 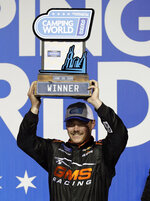 And this time the defending series champion got to celebrate with a burnout in the No. 24 GMS Racing Chevrolet.

Two weeks ago in Iowa, Moffitt was declared the winner when first-place finisher Ross Chastain was disqualified after his truck was found to be too low in a postrace inspection.

"It was a heck of a lot more fun," Moffitt said. "And it's fun not only me, but for the whole pit crew."

Moffitt has nine career victories in the series — eight since the beginning of last season.

Moffitt finished 3.950 seconds ahead of Brandon Jones on the 1 1/2-mile oval.

"I felt confident," Moffitt said. "Ii was just a matter of a caution coming out or not. I'm sure he (Baxter) was nervous, I was nervous we were just praying for no caution to come out."

Jones was making his third truck start of the season.

"We put ourselves in position to learn a bit and that's the most fun I've ever had in a truck race," Jones said, "We've got two more with these guys."

Stewart Friesen was third for his seventh top-five finish of the season. Harrison Burton was fourth, and pole-setter Austin Hill completed the top five.

Jones got past Grant Enfinger on the final lap of Stage 1, and Enfinger held off Jones to take the second stage. Ben Rhodes, who entered the night fourth in the series standings, had engine issues on the first lap and did not finish for the third time this season.