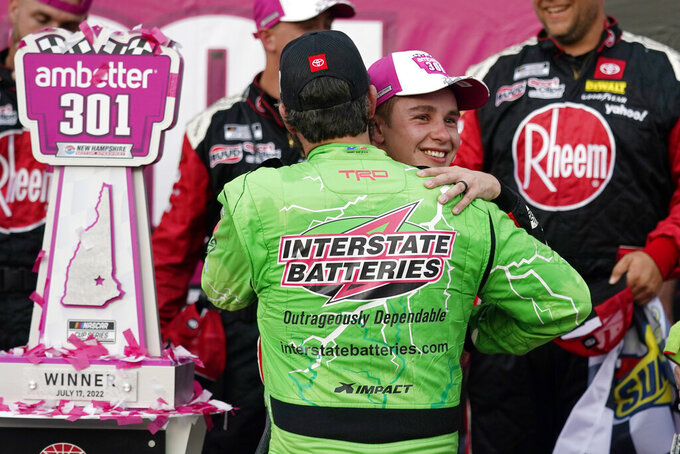 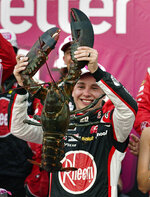 LOUDON, N.H. (AP) — Joe Gibbs had a New Hampshire race victory to celebrate — and a future dinner to fill his belly courtesy of the 21-pound lobster awarded to winner Christopher Bell — but some things still didn't feel right to the Hall of Fame team owner.

No. 1, star driver Martin Truex Jr. had the dominant car most of Sunday's race but faded to fourth, meaning the winless driver is suddenly on the NASCAR playoff bubble with six races left before the 16-driver field is set.

No. 2, two-time Cup champion Kyle Busch is unhappy. Sure, that's not a new feeling for the notoriously prickly driver, but the circumstances bother him more than a run-in with another driver. Busch doesn't have a new contract for 2023 and the process is moving along at such a slow pace, the driver said this weekend he has shopped himself to other teams.

“Turmoil is not a good word for it,” Gibbs said, laughing at a reporter's suggestion. “Give me a better word. Maybe struggle or something right now. I think that happens in pro sports. I think that's the reason why we all like it so much. It's hard. It takes a lot up here. The thing that is probably the hardest is to get four teams going in the right direction.”

At least Bell pointed his No. 20 Toyota in the right direction — the one headed to NASCAR's playoffs. Bell clinched his spot with a strong run late Sunday at New Hampshire Motor Speedway and won his second career Cup race.

Bell was the 14th driver to earn a spot in the 16-driver playoff field. With six races left in the regular season, it leaves open the possibility that more than 16 drivers could win a race and the final playoff spot or spots would be decided on points.

Bell will race for the championship over the final 10 races of the season. Busch has one win, so that secured him a spot in the field. Denny Hamlin has balanced running a race team with Michael Jordan - and signing drivers to his 23XI Racing stable for 2024 — with winning two races this season to lock himself into the field.

That leaves only Truex among the four-car JGR flock without an automatic spot.

The 2017 NASCAR champion with Furniture Row Racing, Truex is fourth overall in the current points standings — essentially meaningless when the field is reset for the postseason. He's 16th out of 16 qualified drivers and knows that as parity has shot through the field in the wake of the introduction of the NASCAR’s new Next Gen stock car, he can't coast on points.

Truex won the New Hampshire pole, won the first two-stages and led a race-high 172 laps. But he couldn't rebound from a two-tire pit stop late in the race that dropped him from contention.

“We just didn't have anything to go forward on two tires,” Truex said. “The car absolutely hated it. It was nothing like it had been all day long. Couldn't go anywhere. Just had to ride it out and get what we could out of it.”

Truex said the two-tire call was “wrong” and shrugged “what are you going to do?”

Truex can forget about points racing with a win next week at Pocono. He has wins on the tri-oval track in 2015 and 2018, though the new car has made old results largely unreliable as a predictor of future success.

Truex, though, admits the odds are against him if even one more driver wins and he is still winless after six more races.

“If another guy wins, then we're out. That's just the way it is,” Truex said. “We race every week, do the best we can, try to win races and, obviously, lately we've been capable. We've had cars capable of winning this year.”

Gibbs said he was surprised Truex hasn't cracked the playoff bracket yet — and just as surprised that his race team has yet to sign Busch to a new contract.

The s earch for a new sponsor has dragged on and Busch has clearly been irked he doesn’t have a new deal. Busch said Saturday a new contract “would be nice, sooner than later.”

“You’ve got to put a lot in place to make things work out, Gibbs said. ”We’re working as hard as we can. We’re going after a number of different directions. So yeah, I’m surprised at this point that we haven’t been able to get that finished.”

The 81-year-old Gibbs still has plenty on his plate this season.

After delicately handling Loudon the Lobster, so does Bell: “ Anyone have any butter sauce? ” he tweeted.