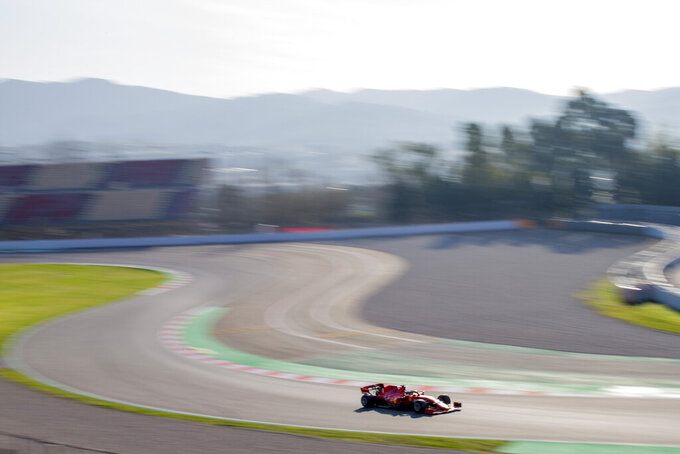 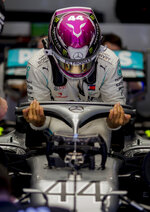 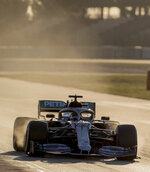 Kubica had a time of 1 minute, 16.942 seconds in the morning session, becoming the first driver other than Mercedes teammates Lewis Hamilton and Valtteri Bottas to go faster than 1:17.000 this year.

“It has been a positive morning in the car for me,” Kubica said. “Times don't matter ... what really counts is finishing the day having completed your testing program, and we did that.”

Mercedes continued to show good reliability, with Hamilton's 89 laps being the most among all 10 drivers who went to the track in the morning. The defending champion was fourth-fastest, while Bottas finished ninth after 90 laps in the afternoon.

“It's been a good session and a good start to the second week of testing,” Hamilton said. “The car didn't quite feel as good as the first week, but I'm sure that will change as the test progresses and the track conditions improve.”

Pierre Gasly of AlphaTauri was second in the morning and ended fifth for the day, behind teammate Daniil Kvyat.

Ferrari driver Sebastian Vettel was 10th after running 84 laps in the morning. Teammate Charles Leclerc finished 13th after 80 laps in the afternoon. Vettel caused the first red flag of the day after running wide.

Kubica also spun out early in the morning session, while Verstappen was among those to spin in the afternoon. One of Verstappen's spins forced the late session to be cut short.

“We won’t know how good we are until we get to Melbourne (for the season-opening Australian Grand Prix)," Verstappen said. "Testing isn't about setting lap times but trying new and different things. I stopped on track just before the end of the session but we're not concerned and overall it was a positive day.”

Red Bull's day was affected by some suspension issues, while Renault and Williams also were held back by problems.

Romain Grosjean drove both sessions for Haas, racking up 107 laps, the most of any driver.

Mercedes was dominant on the first three days of testing last week, setting the fastest times and running the most laps — 494. Bottas led the time charts with a lap of 1:15.732 seconds.

Mercedes also attracted attention last week by introducing a novel steering system in which drivers pull the steering wheel back and forth to adjust the angle of the front wheels on straights.

Some teams on Wednesday tested the prototype Pirelli tire which was being developed specifically for the banked corners that drivers will encounter at the Zandvoort track that will host the return of the Dutch GP in May.

The season begins with the Australian GP on March 15. It is the last before new regulations are put into place in 2021 to try to provide a more level playing field.

Preseason testing has been reduced from eight to six days to help compensate for the record 22 races on the calendar, including a new Vietnam GP and the Dutch GP. Midseason testing also has been eliminated.