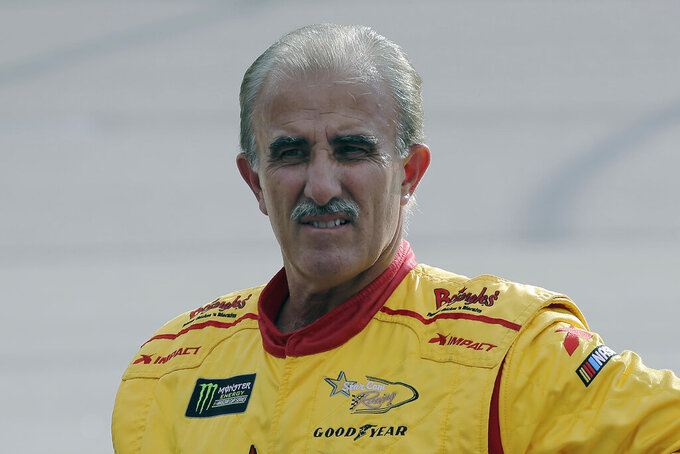 FILE - Derrike Cope looks over pit road before a NASCAR Cup Series auto race at Darlington Raceway in Darlington, S.C., in this Sunday, Sept. 2, 2018, file photo. Cope is best known for winning the 1990 Daytona 500. At 62, Cope is back to give the Daytona 500 another try. ( AP Photo/Terry Renna, File) 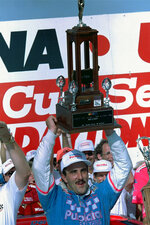 DAYTONA BEACH, Fla. (AP) — Derrike Cope heard it all when he scored the most unthinkable of NASCAR upsets and zipped past Dale Earnhardt -- who blew a tire with a mile to go -- to win the 1990 Daytona 500.

He was lucky. The win was fluky.

The 62-year-old Cope promised he'd never listened to critics when he beat “The Intimidator” and he sure isn’t about to start now -- even at +20000 odds -- when he drives in Sunday’s Daytona 500 in what he says will be his final race.

The competitive feeling stirs as the sexagenarian makes his first Daytona 500 start since 2004 and 15th overall.

“I really don’t care what other people think,” Cope said. “If I did, I probably wouldn’t even be in this position.”

How long has it been since Cope won the race?

Earnhardt -- who limped to a fifth-place finish that year — had his son both start his NASCAR career and retire from the sport over that span. Bill Elliott was third in 1990 and his 25-year-old son, Chase, is the reigning NASCAR champion. A.J Foyt finished 36th. And Morgan Shepherd -- who raised similar concerns about his ability to compete as he raced into his 70s -- was a spry 48 in 1990 when he finished 10th.

Cope was 23 when he made his first Cup start in the 1982 Winston Western 500 at Riverside International Raceway, where he finished 36th with an oil leak. He was winless in 71 Cup starts when Cope stunned the sport by being in the right place at anything-goes Daytona when Earnhardt suddenly slowed.

Cope cruised past him to take the most improbable checkered flag.

Cope was invited on David Letterman’s late-night show and 10 races after Daytona showed he was no one-win wonder with a second checkered flag at Dover International Speedway.

Daytona and Dover are his only career victories and account for one-third of Cope's career top-fives in 427 career Cup races.

Cope has spent most of the last 20 years piecing together occasional Cup races. He bounced around teams and cars and lower-level series, and the shine that should have come as a Daytona 500 champion instead led to little job security and a constant scramble for funding.

Bobby Allison was forced to shutter his race team after the 1996 season because of financial woes, putting Cope out of work and he drifted throughout the aughts without ever starting more than 18 races in a season.

“Maybe if I had been able to stay there with the funding, my career would have gone a different route,” Cope said. “From that point on, you’re in more of a mediocre-type of scenario from there.”

His last Cup Series race was a 33rd-place finish in 2018 at Darlington Raceway. Cope, who also works as manager of Cup team StarCom Racing, will drive the No. 15 Chevrolet for Rick Ware Racing.

Ware has received more buzz from selecting Cope than he would have with other available lesser-known drivers.

“We have to make sure we’re relevant with the media,” Ware said. “Every year we’re trying to grow our team and the quality of our team. It’s very competitive, so we have to take baby steps.”

Cope’s senior status, though, raised the age-old issue in NASCAR: Just how old is too old to compete?

“If we want to market ourselves as the best drivers in the world, we need to ensure the drivers who are out there and being approved, consistently go out there and perform,” NASCAR executive vice president Steve O’Donnell said. “If we feel like someone puts the sport at risk, we’re going to react and we have reacted.”

Busch, who griped last season about drivers who lack the experience to race at NASCAR’s top level, said eligibility standards should be set among the top 40 NASCAR racers each week.

“There’s a point to where you’ve got to have enough cars out there, but also, if you want to be the pinnacle of stock car racing in the world that you’d like to have opportune talent be in the right cars or in the right position, but that’s never going to happen either,” he said.

Cope agreed, saying NASCAR has too many “young kids that really have no regard for anything other than getting to the finish line.”

Older than his peers, Cope expected to be in the thick of contention with 10 laps left. The car Ware is providing was built by Richard Childress Racing and powered by an Earnhardt-Childress Racing engine.

"He has a legitimate shot to stay out of trouble and have himself a top 10,” Ware said.

True, the unpredictable nature of superspeedway racing can often lead to backmarkers crashing the top 10, but Cope hasn’t cracked that mark since he was fifth in 1997 at Atlanta Motor Speedway.

But, hey, it’s the Daytona 500, and if anyone knows how to pull off a shocker, it’s Derrike Cope.