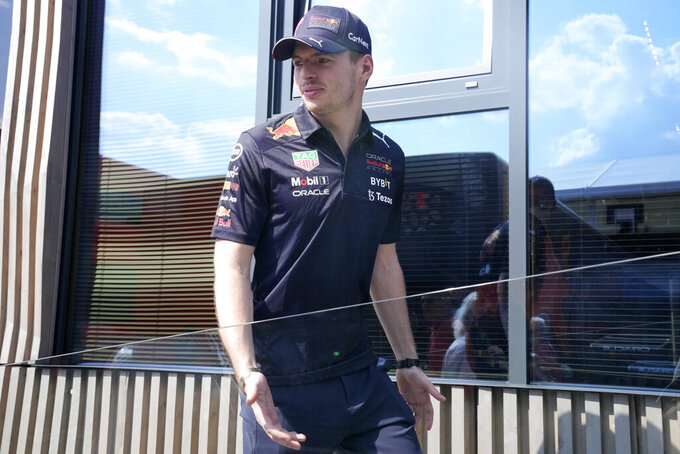 Red Bull driver Max Verstappen of the Netherlands walks through paddock at the Hungaroring racetrack in Mogyorod, near Budapest, Hungary, Thursday, July 28, 2022. The Hungarian Formula One Grand Prix will be held on Sunday. (AP Photo/Darko Bandic)

BUDAPEST, Hungary (AP) — Max Verstappen understood why Charles Leclerc was so hard on himself after crashing last weekend, and the reigning Formula One champion feels it's healthy for Leclerc to let his emotions out.

Leclerc looks to bounce back at Sunday's Hungarian Grand Prix after putting his Ferrari into the barriers while leading the French GP. That error gifted Verstappen a win to open up a huge 63-point lead in the overall standings.

Leclerc screamed “Noooo!” and said he didn't deserve to win a world championship driving like that, leading observers to question if he was beating himself up too much. But Verstappen, who has been emotional after DNFs and reliability issues, said it's just Leclerc's way of dealing with disappointment.

“Everyone handles that in a different way. Some people need to reflect on it like that. At the time you’re still a bit emotional from what just happened and maybe become a bit too emotional," the Red Bull driver told The Associated Press during an interview on Thursday. “But that’s fine, people should be emotional, they should show their emotions.”

Leclerc and Verstappen are both 24 years old and were rivals in karting before slugging it out in F1. The mutual respect has grown between them after some hard — but fair — wheel-to-wheel racing at the front this season.

“There’s no doubt about his general performance and pace. He’s a naturally skilled driver and that’s always something you can admire. People who are naturally quick, who don’t need to look into data for hundreds of hours," Verstappen told the AP. "These drivers stood out already when they were younger. They just have this little extra compared to other drivers."

Leclerc's lead over Verstappen earlier this season was nearly 50 points after Verstappen had two DNFs in the first three races.

“I was just very frustrated because they were two times very easy second places and I knew we need those points. It wasn’t that we lacked pace but we still retired," Verstappen said. “The good thing within our team is that they can tell me when I did something wrong and I can tell them when they did something wrong ... You know when the strategy is wrong, or a pit stop is wrong or I drove like a pancake, you have to be honest with each other.”

Leclerc, meanwhile, cleared his mind after being ruthlessly honest with himself.

“There's nothing that will help me dwelling on my mistake,” he said. “I did that mistake, it cost me lots of points. I'm aware of it and I just need to move on.”

Leclerc has shown his electrifying speed in qualifying with a season-leading seven pole positions this season, and while he has made mistakes driving on the limit in races he does not want to change his approach.

“I was pushing massively (in France) and this is what pushed me to a mistake. But will I want to give up the 2/3 tenths to not make a mistake? Probably not,” he said. “I will believe in it until the very end. The goal remains to be world champion. Obviously it's a very optimistic goal.”

Sergio Perez is also feeling optimistic and the Red Bull driver has Leclerc in his sights, considering he is only seven points behind second-place Leclerc in the standings.

There is a four-week summer break after Sunday's race, followed by a triple header in Belgium, the Netherlands and Italy.

“I think these next four weekends are very crucial for the championship," Perez said. "We will see where everything is at and hopefully by then I will have have been able to close the gap."

He also praised Leclerc for not making excuses for his error last Sunday.

“It’s great to see drivers taking responsibility," he said. "I’m sure Charles is a very intelligent driver that will learn from that mistake.”

Although the championship leader Verstappen is 70 points ahead of him, Perez has not given up hope he can catch his own teammate and launch a late title bid of his own.

“At the moment everything is still very open so we have to keep pushing. I’ve been more at home with the car than in recent weekends," he said. “I think there are a lot of positives to take from this first half of the season. It’s been very good, very complete, good results, good consistency.”

Perez plans to go the beach in Mexico with his family and friends during the summer break, but he doesn't think he can properly disconnect.

“We are still flat out working on everything,” he said.

Mercedes driver Lewis Hamilton is on a roll with four straight podiums but does not envisage a record-extending ninth victory in Hungary.

Mercedes secured its first podium double of the season at the French GP last weekend, with Hamilton in a season's best second place and George Russell placing third.

But Hamilton still thinks the Silver Arrows are falling short compared to Ferrari and Red Bull.

“We don't have the pace to beat these guys,” Hamilton said. “Through reliability we have capitalized on their failures, but out of pure pace we haven't beaten them.”

“We think we can fight for victories at some point this season," he said. “But I don’t think we’ll ever have the car that’s out-and-out quickest.”

Ferrari was expected to be fast on the Hungaroring track and led Friday's two practice sessions, with Carlos Sainz Jr. fastest in the first and Leclerc in the second.

The second practice session saw Williams driver Alex Albon spin the car and then slide backward off track after blocking his rear tires.

McLaren had a good second session with Lando Norris finishing in second place ahead of Sainz; but it wasn't so smooth for Mercedes.

Russell had problems entering Turn 1 while Hamilton called the car “unstable” after going wide off track late on. Russell was eighth quickest and Hamilton 11th, with both around a second behind Leclerc's leading time.

“The car’s a bit of a struggle, it’s crazy how much it swings from track to track,” Hamilton said after second practice. “We’re trying to figure out how we can get the car working, it’s a little bit loose and it’s not doing what we want it to do. Difficult day.”