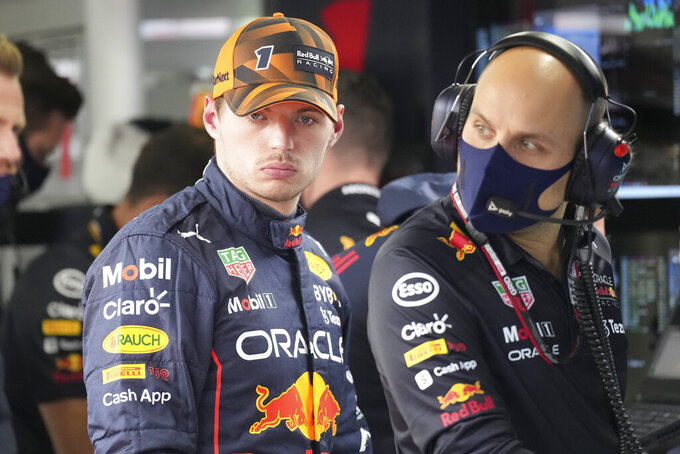 SUZUKA, Japan (AP) — Ferrari's Charles Leclerc knows it. So does anyone following Formula One; no calculators needed.

Red Bulls' Max Verstappen is set to win his second straight drivers' title, and it's likely to come on Sunday with rain predicted for the Japanese Grand Prix at Suzuka.

Friday's two practice sessions were run in steady drizzle, although Saturday's qualifying is expected to be dry on the classic figure-eight circuit in central Japan.

“I think realistically Max is going to be a champion, if it’s not this weekend it’s going to be very, very soon,” said Leclerc, who trails Verstappen by 104 points with five races to go — including Suzuka. Red Bull teammate Sergio Perez is 106 behind.

If Verstappen wins on Sunday, and also picks up the bonus point for the fastest lap, that would give him 26 points (25 for the win, 1 for the quickest lap) and he's the champion.

He could also win the season title with a lesser result, depending on how others finish.

If not, it's sure to be settled in two weeks at the United States Grand Prix in Austin, Texas.

“It would be very nice if it happens here but if it doesn’t happen here — I will be even more in favor the next race,” Verstappen said, sounding unmoved by the speculation.

“To be honest, I'm not really thinking about it too much.”

Verstappen has been dominant all season with 11 victories in 17 races. The Singapore GP a week ago was the exception, where Verstappen finished seventh. He called it a “very messy weekend" on the street circuit.

“We all know that it was a bad weekend, but we also have shown this year that we’ve had a lot of very good weekends. So we know how to do it.”

Winning at Suzuka would be special. The track is operated by car manufacturer Honda. Red Bull and sister team AlphaTaura run on Honda designed engines, and the race if officially called the “Honda Japanese Grand Prix.”

Honda formally quit F1 after last season, but still supports the two teams. In addition, Honda's name will appear on the Red Bull livery this weekend. It could indicate a return to F1 though there's nothing official.

“It's great to see the full name back on the car,” Verstappen said. “And about the future. It's too early to talk about that right now, but I think in general — the Honda name for F1 is great and it would be very nice to see them come back again.”

About 190,000 fans are expected over the weekend, with 90,000 on Sunday. Though Japanese fans are among the sports' most fervent, capacity limits make the crowds smaller than at many races that draw more that 300,000 for a weekend.

"It (Suzuka) is truly iconic," Mercedes driver George Russell said. “And it’s definitely, you know, a top-five circuit for probably all of us.”

Added two-time champion Fernando Alonso: "I think everyone loves Suzuka. The combination again of high-speed corners, a little bit of banking in the corners as well make the feeling really special. The fans are so passionate here. So, the whole weekend is a big thing."

Mick Schumacher spun out late in the first practice session on Friday and severely damaged the front end of his Haas car. The shunt was bad enough for the medical car to be deployed, although Schumacher walked away.

Schumacher, the son of seven-time F1 champion Michael Schumacher, could be on the way out at Haas.

Schumacher is in his second season with Haas, where he was promoted from the Ferrari Driver Academy. He’s been associated with Ferrari since 2019 after winning the European F3 championship.

Schumacher’s contract with the the academy is set to expire at the end of this year and Haas, which has an engine partnership with Ferrari, would not be obligated to keep the 23-year-old German if Schumacher is no longer part of the program.

Schumacher has repeatedly declined to answer questions about his future.

The times of the leaders in the second session, also held in a steady drizzle, were quicker with George Russell of Mercedes and teammate Lewis Hamilton going 1-2. Russell was timed in 1:41.935. Hamilton turned 1:42.170 and Verstappen was third in 1:42.786.

Formula One's governing body FIA is to rule Monday if any team has violated cost-cap rules. It comes a day after Verstappen could win the title.

“I think it would be bad for the sport if action wasn’t taken if there was a breach,” seven-time champion Hamilton told media. “But I don’t know if there is, so I’ll wait just as you will.”

Verstappen demurred when ask about it on Thursday. Red Bull is one of the teams implicated in unsourced reports.

“I’m not really busy with these kind of things,” Verstappen said. “I mean, it’s up to the teams and the FIA, and I just have to focus on the driving. So there’s not much more to say on that. I guess we’ll find out on Monday.”