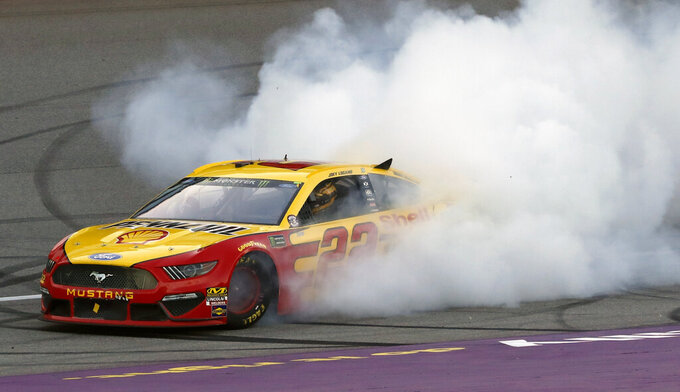 Joey Logano's victory at Michigan on Monday gave Team Penske its fifth Cup win of the season. That's two fewer than Penske had all of last year, when Logano won the series title. In another year, Penske might be the clear choice as NASCAR's dominant team, but that's not the case at the moment. Joe Gibbs Racing has nine victories — together, these two teams have combined to win 14 of the 15 races so far.

"When I think of key races to win, obviously the crown jewel events that we probably all know, Brickyard, Daytona, Darlington, those type of racetracks that really stand out," Logano said. "This one is next in line to me because of Roger Penske, this being in his backyard. You always want to win at your home track."

It's been quite a few weeks for Penske, who won his 18th Indianapolis 500 thanks to Simon Pagenaud and now has the points leader in NASCAR with Logano. Of course, to win Monday, Logano had to hold off two of Gibbs' top cars — the No. 19 of Martin Truex Jr. and the No. 18 of Kyle Busch. Truex complained afterward that he thought Logano was too quick on an overtime restart.

Logano and Brad Keselowski are first and third in the Cup standings for Penske. Busch is second, Truex is sixth, and Denny Hamlin is seventh for Gibbs. The two teams combined to take four of the top six spots in Monday's race.

"We just did the best we could with what we had," Busch said. "Our M&M's Camry was not great, but we just kept working on it all day. We just kept falling back or doing rounds, doing air pressure, everything we could to get improving on it and make it better. ... Overall we came with about — way better than we should have. Let's go with that. Way better than we should have."

At this point last season, five teams had victories, and Stewart-Haas Racing and JGR had combined to win 11 of the 15 races. But through 15 races in 2017, eight different teams had already won, and none of them had more than three victories.

The next four races on the schedule — at Sonoma, Chicagoland, Daytona and Kentucky — are at places where Truex, Busch and Erik Jones won last year. They all drive for Gibbs at the moment, so perhaps Team Penske should feel a bit relieved after taking advantage of its opportunity at Michigan, where JGR has won only one of the past 15 races.

JGR has managed to win nine races despite having no poles yet this year. Logano was actually the first driver to win from the pole all season — although all three of his career wins at MIS were as the pole winner.

Just another factor that appeared to work in Penske's favor in Michigan.

"I think there's a lot of advantages to winning the pole here in Michigan. Number one being the pit stall you get is the best pit stall in not only this racetrack but probably the whole sport when it comes to winning a pole here," Logano said. "That first pit stall is really good. It's really close to the camera line, which obviously puts you in what position you're in when you're leaving. The closer it is, the faster the stall. Pretty big advantage to get it here. That pays rewards throughout the whole race.