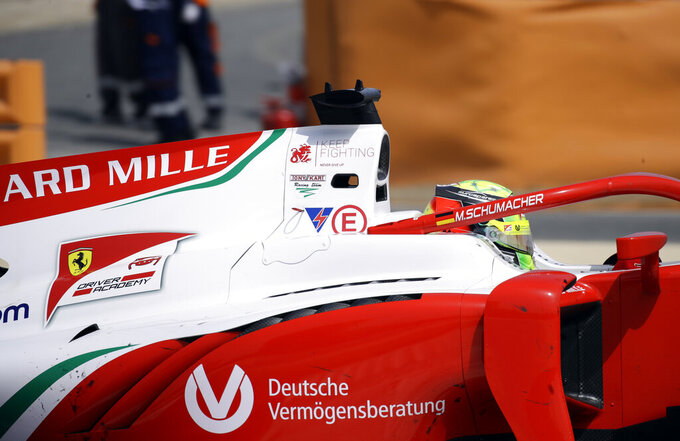 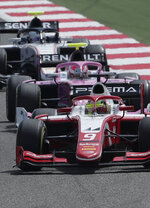 The 20-year-old son of F1 great Michael Schumacher had a confident start, jumping up one place. He drifted down the field before climbing back into ninth place, and then clawed back nearly two seconds before making a smart overtaking move inside Japanese driver Nobuharu Matsushita on the final lap.

The German driver finished about 35 seconds behind winner Nicholas Latifi of Canada.

Finishing eighth means Schumacher starts from pole position in Sunday's F2 race — where grid positions are reversed — giving him a decent chance of a podium finish or even victory.

The spotlight increases further when he makes his F1 testing debut with Ferrari at the Bahrain desert circuit on Tuesday. Schumacher is part of Ferrari's driver academy, as was the 21-year-old Charles Leclerc — who is now racing for Ferrari after just one season with Alfa Romeo Sauber in F1 last year.

Schumacher's famed father won five of his record seven F1 titles with Ferrari from 2000-04. The 50-year-old Schumacher also holds the F1 record for most wins with 91.

They were skiing together in December 2013 when his father fell and hit the right side of his head on a rock, splitting open the helmet.

When the younger Schumacher won the F3 European Championship title last year, it fast-tracked him into F2 and prompted speculation he could be in F1 by 2020 if he shines this season.

They are not uncommon, but have rarely been successful.

Nico Rosberg's F1 title with Mercedes in 2016 made him only the second son of an F1 champion to become one, following father Keke Rosberg's triumph in 1982.

The Villeneuves came close: with Gilles runner-up in '79 and his son Jacques crowned champion in '97.

The late Ayrton Senna won three F1 titles and the Brazilian is considered arguably the greatest F1 driver, along with Schumacher.