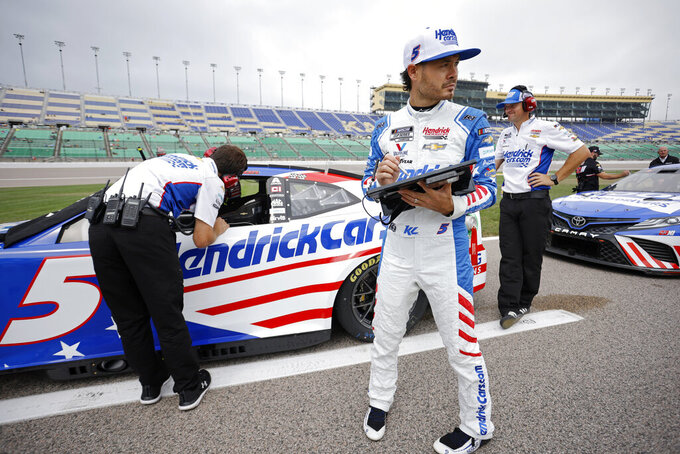 CONCORD, N.C. (AP) — NASCAR champion Kyle Larson has emerged as a candidate for an Indianapolis 500 ride and said Saturday he has permission from Hendrick Motorsports to run the iconic race if a deal can be completed.

Larson told The Associated Press he's spoken to both team owner Rick Hendrick and vice chairman Jeff Gordon about his desire, and Hendrick's only caveat was that Larson not run the Indy 500 this season.

If he does land a ride, though, Larson said he'd run “The Double” and compete in both the Indy 500 and NASCAR's Coca-Cola 600 on the same day. Only four drivers have previously attempted to run the 1,100 miles in two different states on the same day, and Tony Stewart in 2001 was the only driver to complete all the laps.

Kurt Busch in 2014 was the last driver to attempt the feat.

“Nothing's changed. I would love to do it,” Larson told AP. “It's just timing and I want to be in the best equipment possible. But I've told Jeff and Rick that I'd like to do it and it's kind of up to them to find something.”

Kyle Busch also has permission to run the Indy 500 when he joins Richard Childress Racing next season, but conversations with McLaren to run a fourth car for Busch have fizzled over the limited budget potential sponsor Menard's offered for the effort.

Seven-time NASCAR champion Jimmie Johnson, who last month retired from full-time racing after two seasons in IndyCar and his own Indy 500 debut, also wants to run The Double next season.

But for it to work for Larson, Busch or Johnson, they'd all likely need to partner with a Chevrolet team and the options are limited. Team Penske has been reluctant to run a fourth car at Indy, which would leave Arrow McLaren SP as the best viable Chevy choice. The McLaren lineup finished second, fourth and 11th in this year's race.

Indy 500 winner Tony Kanaan, who finished third this year, has also emerged as a candidate for a seat with McLaren. The team is expanding next year to three full-time entries with the addition of Alexander Rossi to the lineup, and team head Zak Brown has so far remained undecided on if he wants to field a fourth car in “The Greatest Spectacle in Racing.”

Grassroots racing fans are eager to see Larson at Indy, as his dirt background and dominance in smaller series across the country has made him a popular figure. Although his name is now being mentioned in IndyCar circles for a potential seat next May, Larson said he was unaware of any ongoing negotiations involving his participation.