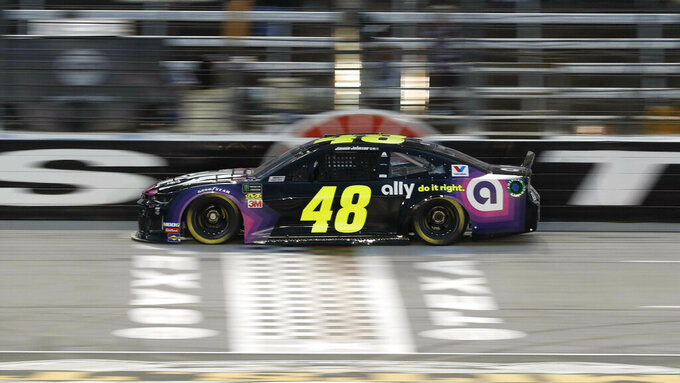 FORT WORTH, Texas (AP) — Maybe Jimmie Johnson can do something old at Texas, and get back into Victory Lane.

"I think the term 'new' is the thing that has hurt us the most this year. We know and acknowledge that what we were trying last year didn't work," Johnson said. "Us trying new things and not having a past history with these setups, and honestly searching for greatness and to get an advantage. In some respects maybe we've been a little aggressive in trying to start the year."

With his career-long winless streak at 65 races since a win at Dover in June 2017, Johnson is the polesitter in his No. 48 Chevrolet Camaro for Sunday's race at the 1½-mile Texas track where he is a seven-time winner. It is his first pole anywhere since 2016, the season he won the last of his seven NASCAR Cup championships.

And maybe this will be the first race of 2019 that someone wins other than a driver from Joe Gibbs Racing or Team Penske, though one of them won both lower-series races at Texas this weekend. Each of those teams won three of the first six Cup races.

Gibbs driver Kyle Busch will have a shot at a Texas tripleheader weekend sweep after winning both the Xfinity and Truck Series races. He completed such tripleheader sweeps at Bristol in 2010 and 2017. He had another shot earlier this season at his home track in Las Vegas, winning Xfinity and Truck races before finishing third in the Cup race. He twice previously missed chances to sweep at the 1½-mile Texas track, in 2009 and 2014.

Johnson and his Hendrick Motorsports teammates William Byron and Chase Elliott are starting in the top three spots. Daniel Suarez qualified fourth for Stewart-Haas Racing, the team that last November in Texas had three of the top four starters and sent Kevin Harvick to Victory Lane.

"It's week to week. I think that everyone on the West Coast was kind of tied into however they built their cars it was done, and they were kind of stuck through the West Coast," JGR driver Denny Hamlin said. "But I think now this is the first mile-and-a-half we've had back where people have learned from the West Coast and made adjustments. Certainly, this weekend you can see a shift in cars that are fast that hadn't been in the past."

Hamlin, who won the opener at Daytona and has finished no worse than 11th this season, was the highest-qualifying Gibbs driver at Texas in sixth. He also had the fastest lap at 186.987 mph in the only practice Saturday, when temperatures were around 50 degrees — about 20 degrees cooler than Friday.

Johnson had the top practice speeds Friday, and led all three stages of qualifying to get the pole at 188.890 mph. He was fifth-fastest in practice Saturday at 186.047 mph.

This will be the 37th Cup race at Texas Motor Speedway since the track opened in 1997. It is the fifth since a total repave when Turns 1 and 2 were also reconfigured before the 2017 spring race that Johnson won.

Johnson last week finished 24th at Martinsville, where he got lapped during the second stage on the historic short track where he leads all active drivers with nine victories. He is 15th in season points, after finishing 14th last year for the worst showing in his 17 full Cup seasons so far.

"I had so much support on social media," the 43-year-old Johnson said in a sarcastic response. "There were so many nice people talking about me and how good of a driver I am and how young I am."

As he spoke, Johnson could see on the far wall a photo of him celebrating in Victory Lane one of his wins at Texas. Both arms are raised into the air and the checkered flag is in his right hand.

Johnson's seven Cup wins are the most at Texas, four more than Busch, the next closest active driver. Johnson also holds track records with his 15 top-five finishes in his 30 starts, and 1,041 laps led.

After a tough start this season for the entire Hendrick team, having the top three qualifiers is a boost. The team's fourth driver, Alex Bowman, posted a lap during the first stage of qualifying that got him in the top 24 before he made hard contact with the wall and had to switch to a backup car.

"To have all three cars up there in the top three positions, and I think Alex would have been right there in the mix if he didn't have his troubles ... is saying a lot," Johnson said. "The work that went into these cars and the work that's gone into, honestly the last 36 months, and we're not out of the woods yet. But this is a very good weekend for us to really build on our 1½-mile program."