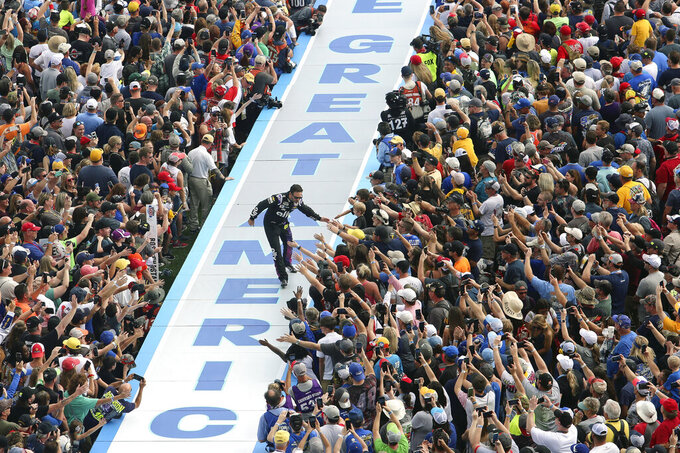 DAYTONA BEACH, Fla. (AP) — Jimmie Johnson tugged at his baseball cap, walked to a golf cart and sat backward on the dash for a ride out of the Daytona garage. After a Speedweeks where Johnson was hailed by many of his peers as the greatest NASCAR driver of all time, Johnson's expected final Daytona 500 ended with the seven-time champion looking at a scoring pylon that ticked off laps without him.

Johnson was collected in a late-race wreck at the Daytona 500, and his #OneFinalTime kickoff in the final full season of his NASCAR career ended with a 35th-place finish.

"It's been really a cool race to be a part of," Johnson said. "You only dream of racing in races like this as a kid."

Johnson, tied with Richard Petty and Dale Earnhardt with seven Cup Series titles, was trying to win for the first time in 96 races and had a strong No. 48 Chevrolet down the stretch.

His Chevy was parked on pit road following the multi-car wreck, and his crew furiously tried to repair it and at least have Johnson finish the race in the car. The time allotted to make the necessary repairs expired, and so did Johnson's chance of salvaging a better finish.

He finished well behind winner Denny Hamlin in a race marred by the fiery last-lap wreck that sent Ryan Newman to the hospital.

Johnson was long gone by the end, content that he knew he could still be competitive in the 48.

"It helps to always run good," Johnson said. "That competitive spirit still is very intense inside of me."

Johnson, the El Cajon, California, native, was celebrated throughout Speedweeks, and he tried his best to savor NASCAR's biggest race. Johnson walked to a meet-and-greet Sunday when his golf cart ride was scrapped because of tightened security spurred by President Donald Trump's arrival. Johnson paused when he saw the 22-foot high flagstand, where twice the checkered flag waved to declare him the Daytona 500 champion, and decided to climb up. Dressed in khakis and a black polo shirt, Johnson surveyed the empty track, where hours later he would make his expected final Daytona 500 start. He even left behind a keepsake: He autographed a white square and added an "LG" for Let's Go on the checkered start/finish line.

"In the car, that's my space," Johnson said. "I'm perfectly happy and content with the decision I made. Maybe inside the car isn't highly emotional yet because it's still early in the year. It's just the first race of 38. I can tell you, there's been weight on my shoulders outside the car. Just in the car, you're trying to win."

Johnson was waved to the front of the field during Sunday's pace laps to raucous applause from a sold-out Daytona International Speedway. He was mobbed as he made his way through the garage by autograph seekers who wanted one more keepsake. He signed a woman's shirt, the bill of baseball caps and other memorabilia before he ducked in front of a row of haulers to avoid the crush.

Johnson was teased by WWE wrestler Sheamus, who asked him how he ate his sandwiches (the unrelated Jimmy John's) in the car. Hootie and the Blowfish singer Darius Rucker said he wanted to play the pre-race concert because it was Johnson's final Daytona 500.

Johnson made it a family affair with his wife and two young daughters before the race resumed Monday. His daughters hugged him, whispered advice and didn't want dad to go before the finished his final ride at Daytona.

"The prerace stuff, the rainout, staying occupied today, there was a lot of wait in the activities outside of the car," Johnson said. "In the car, it's funny, you just go back to that place of being a competitor and trying to win. But the stuff surrounding it was definitely heavier."

Johnson won five straight championships from 2006 through 2010, and his 83 career victories are tied with Cale Yarborough for sixth all time. But he's mired in a 96-race losing streak spanning more than two years, and he had two crew chief changes last season.

Crew chief Cliff Daniels, starting his first full season, was in Johnson's ear on the radio before Monday's resume resumed: "Let's buckle down and finish this thing the way we wanted."

Johnson instead left waiting on another race to end the losing streak.