IndyCar gets through well-screened, delayed opener in Texas 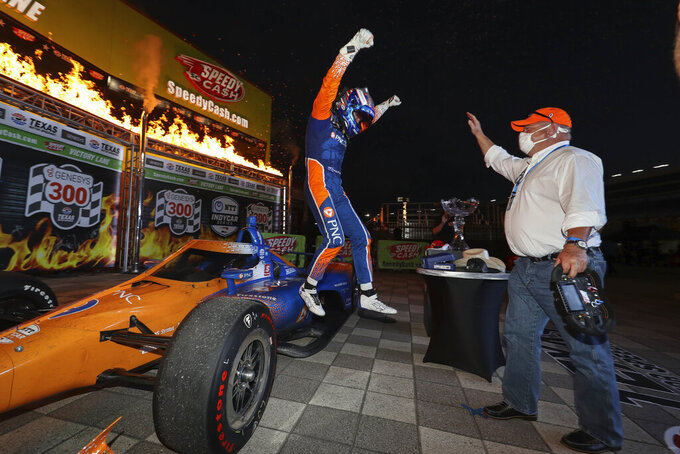 FORT WORTH, Texas (AP) — Through all of the uncertainty and unknowns after more than eight months since the last IndyCar race, Scott Dixon and another pair of former champs relied on their experience for podium finishes.

There were no spectators, and there won’t be for the next race on July 4, but the series finally started its season that was delayed by the coronavirus pandemic with a long, well-screened day — from the health screenings everyone had to go through just to get inside Texas Motor Speedway to the new protective windscreens over the cockpits of the cars.

“We knew coming in it was going to be a tough situation for the IndyCar Series putting together the race and making sure we could put on the show to entertain people," said Simon Pagenaud, who was runner-up behind Dixon. “That’s what we do, that’s what this business is about."

And people watched, even though the only spectators at the track — where the grandstands can seat well over 100,000 people — were those with access to the condos overlooking Turn 2.

NBC Sports said Sunday that the Saturday night prime-time telecast drew nearly 1.3 million viewers, making it the most-watched IndyCar race outside the Indianapolis 500 on any network since 2016. It was the biggest audience for an NBC telecast of any IndyCar race away from the Brickyard.

Five-time champion Dixon sped away in the No. 9 Chip Ganassi Honda on a restart with three laps left for a comfortable 4.4-second winning margin over a pair of Team Penske drivers, 2017 IndyCar champ Pagenaud and polesitter Josef Newgarden, the defending and two-time series champion.

“Just awesome to be back here. It was awesome to get into racing again,” Pagenaud said. “The false start in St. Pete, it was the first time in my career I’ve ever experienced anything like it.”

Nearly three months after the season was about to start on the streets of St. Petersburg, Florida, and the extended hiatus that followed because of the pandemic, the all-in-one-day opener ended with Dixon taking the checkered flag at dusk. The 200-lap race on the 1 1/2-mile, high-banked oval came after practice and qualifying earlier in the day when the heat index was consistently around 100 degrees Fahrenheit — and much hotter in cars and on the track.

“We hadn’t tested here, the Aeroscreen was new, hadn’t run the tires. A lot of big changes going on,” Dixon said. “You really had to go in with an open mind and kind of make sure that all the work you’d done really worked out. ... Really hard on the rookies, a lot of people that haven’t been here before. For the veterans, I think (experience) was definitely an advantage."

IndyCar's next race is at Indianapolis, on the road course and not the 2 1/2-mile track that hosts the Indy 500, which was pushed back from its traditional Memorial Day weekend date until Aug. 23.

Dixon's 47 wins are the most among active drivers and third on the career list behind A.J. Foyt (67) and Mario Andretti (52). Dixon extended his own record by winning a race in his 16th consecutive season, and matched Foyt’s mark of 18 seasons overall with a victory.

“I feel very lucky and privileged to do what I do, to get to race with the best in the world,” Dixon said. “To still have A.J. and Mario come to the track, I think that’s the coolest thing. And the Unsers, a lot of legends of the sport."

The season opened at one of the series' fastest and trickiest tracks, without testing, with limited practice time and revised tire rules. It was also the debut of the new protective clear windscreens that are anchored to the cockpit with a titanium frame.