Hamilton fastest in both practices ahead of Saudi Arabian GP 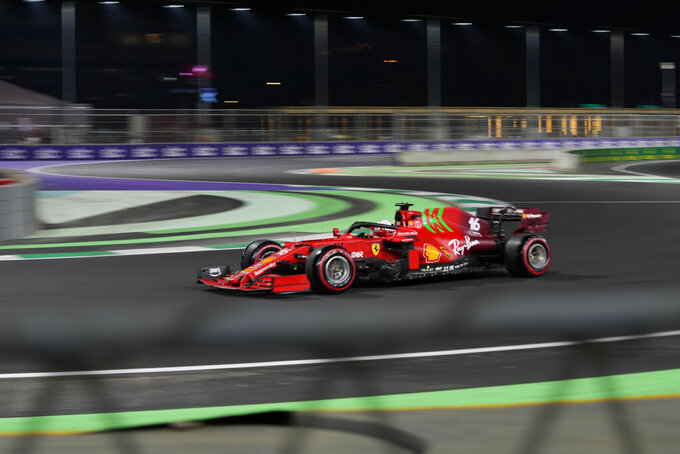 JEDDAH, Saudi Arabia (AP) — Lewis Hamilton may not feel comfortable racing at the Saudi Arabian Grand Prix but his reluctance to compete in the country hasn't shown on the track: The seven-time world champion was fastest in both of Friday's practice sessions at Formula One's newest circuit.

Hamilton led Mercedes teammate Valtteri Bottas in the Friday evening session, which was ended about three minutes early because Charles LeClerc brought out the red flag with a high-speed crash in Turn 22.

In Friday's first session, Hamilton led championship leader Max Verstappen on the speed chart. The Red Bull driver holds an eight-point lead over Hamilton with two races remaining, including Sunday's debut on the second-longest course on the F1 schedule.

The high-speed street circuit is 6.2 kilometers (3.8 miles), with 27 corners (16 left turns, 11 right turns) built along a 30-kilometer (18.6-mile) coastal resort area in Jeddah. Workers rushed to complete the circuit ahead of Saudi Arabia's inaugural F1 event — the track itself was built in about eight months with finishing touches still underway this week — but portions of the facility remain under construction.

Hamilton has been the most outspoken driver about F1's visit to Saudi Arabia, a country that has been accused by human rights groups of “sportswashing” by staging Sunday's race to detract from abuses throughout the country.

F1 is closing its season with three consecutive races in the Middle East, and four total stops in the region on the 2021 calendar. Hamilton spoke out in Bahrain and Qatar, and said Thursday he wouldn't choose to race in Saudi Arabia. The season concludes next week in Abu Dhabi.

“As I said (in Qatar) I feel that the sport and we are duty bound to try to help raise awareness for certain issues that we’ve seen, particularly human rights in these countries that we’re going to,” Hamilton said. “Do I feel comfortable here? I wouldn’t say I do. But it’s not my choice to be here, the sport has taken the choice to be here. Whether it’s right or wrong, while we’re here again, I feel it’s important that we do try to raise awareness.”

Hamilton debuted a helmet in Qatar that displayed the Progress Pride flag design to support the LBGTQ+ community. He said he'd wear it in Saudi Arabia and Abu Dhabi as he attempts to raise awareness about laws against same-sex relationships.

“The law, if anyone wants to take the time to read what the law is for the LGBTQ+ community, it’s pretty terrifying. There’s changes that need to be made,” said Hamilton, who added changes to the laws is not simple.

“For example, women’s rights of being able to drive in 2018 ... are they really in effect? Why are some of the woman still in prison from driving many, many years ago?" Hamilton asked. "There’s a lot of change that needs to happen and I think our sport needs to do more.”

Although he's attempting to draw attention to human rights issues off the track, Hamilton remained relaxed on it in his bid for a record eighth championship. Verstappen is attempting to win his first career title and the Dutchman has been the more dominant of the two this season.

But Hamilton has turned it up with two consecutive wins heading into Sunday.

Verstappen can mathematically win the championship in Saudi Arabia, but Hamilton also has the ability to leave the circuit tied with the Dutchman in the standings.

Hamilton said there are differences in this title fight from his previous battles, but the British driver said he's never been more relaxed.

“It’s different in one sense because we’ve got two incredibly close teams,” Hamilton said. “It’s different because as a team we’re fighting for uncharted territory. No one has ever won eight titles, team or driver, so that’s quite fresh and new. And then on the other side, I’m more relaxed than I’ve ever been because I’ve been around a long time. It’s not my first."

Hamilton has shaved 11 points off Verstappen's lead in the last two races.