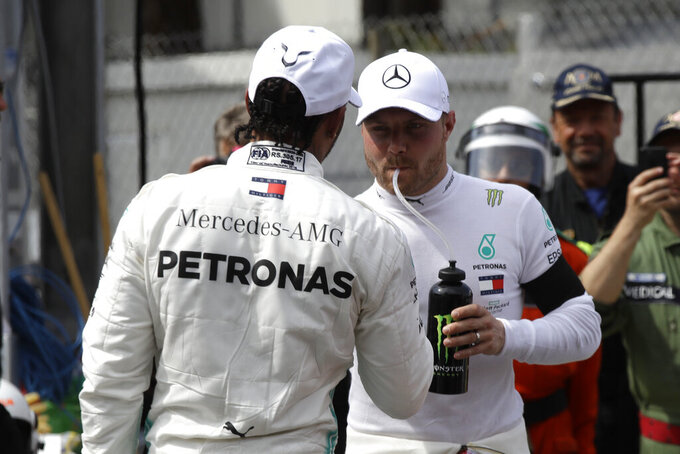 Mercedes driver Lewis Hamilton of Britain, left congratulates with his teammate driver Valtteri Bottas of Finland, after the qualifying session at the Monaco racetrack, in Monaco, Saturday, May 25, 2019. The Formula one race will be held on Sunday. (AP Photo/Luca Bruno)

Hamilton beat Mercedes teammate Valtteri Bottas on the last lap of qualifying on Saturday and he will aim for his 77th career win in Formula One on Sunday, which will feature more tributes to Lauda.

Lauda, who died on Monday, played a key role in getting Hamilton to join Mercedes in 2013 after he left McLaren.

"All these years, he has been my partner in crime, in all my negotiations and in pushing for improvements on the car. He was such a racer," Hamilton said. "I have great memories and he'll live on in all our memories."

Lauda's phone call to Hamilton in late 2012, when Hamilton was sat by his swimming pool at home in Monaco, proved both decisive and fruitful. Since joining Mercedes, the British driver has won four world titles to add to his first with McLaren in 2008.

Lauda, a three-time F1 champion, died at the age of 70 less than one year after a lung transplant.

"I was in touch with Niki a lot through these past eight months. We were sending videos back and forth to each other," Hamilton said, pausing to collect his thoughts. "It was always difficult as some days he looked good, he was perky and saying 'I'm coming back, I'm feeling strong,' and other days, he had lost a lot of weight. It was tough."

There will be a special ceremony held in Lauda's honor in Monaco.

Bottas, who wore a black armband on his left sleeve in memory of Lauda, thought he should have beaten Hamilton after clinching pole in the past three races.

"I'm really disappointed, I had the speed today," Bottas said.

Max Verstappen underlined his consistent season by qualifying in third place for Red Bull, ahead of Ferrari's Sebastian Vettel.

The mood in the Ferrari camp is likely to be despondent.

After Vettel's crash earlier in the third and final practice, the team made a glaring strategical error which resulted in teammate Charles Leclerc being eliminated from the first section of qualifying.

Leclerc hoped to be on the front row but instead starts his home race in a lowly 16th place on a street circuit where overtaking is notoriously difficult.

Ferrari is clearly feeling the pressure with Mercedes finishing 1-2 in all five races this season.

Vettel's last of four F1 titles was in 2013 with Red Bull and this season he is under pressure from within the team.

The 21-year-old Leclerc, who took a brilliant pole in Bahrain , had been fastest in the third practice and he was angry with his team's error.

"We can't afford to do these things. It's just a big, big disappointment," Leclerc said. "I need some explanations."

Qualifying is split into three sections, with five drivers eliminated from Q1 and Q2 to leave 10 contesting pole.

Leclerc was kept in the garage toward the end of Q1, with his team thinking he'd already done enough. But it backfired as he failed to even make Q2.

"These are errors we absolutely should not be making, to be eliminated in Q1 in Monaco is the worst thing that can happen," Leclerc said. "We should have gone out again, we had put in a lot of fuel to do several laps ... I didn't understand why we weren't going out again."

Despite enjoying idyllic racing conditions under blue skies and a dry track, Vettel locked the inside left wheel and went straight into the exit barriers at Saint Devote.

Vettel has not won any of the past 13 races , dating to last August at the Belgian GP. His vulnerability under pressure was evident the last two seasons, when he made key mistakes in losing the title race to Hamilton.

Leclerc had a near miss with the Haas car of Kevin Magnussen moments after Vettel's crash.

Then it got worse for Leclerc, through no fault of his own.