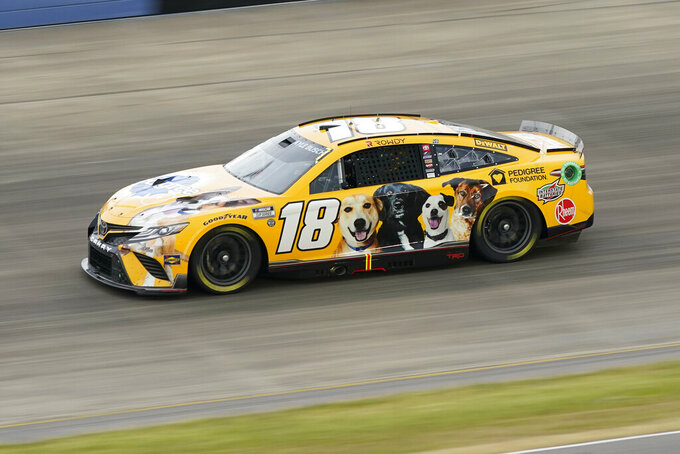 Kyle Busch doesn't know what he will be driving next year as he hits the halfway point of the NASCAR season.

It doesn't necessarily mean that Busch won't be driving for Joe Gibbs Racing. But he heads to Atlanta Motor Speedway for Sunday's race in a contract year and waiting to see if JGR can find the sponsorship money to keep the two-time Cup Series champion.

M&M Mars has sponsored Busch since he joined the Gibbs organization in 2008, but the company is pulling its NASCAR marketing spend at the end of this season. Busch earned his first win as a Gibbs driver four races into his debut season, at Atlanta, with Mars brand Snickers on the No. 18 Toyota.

Dave Alpern, president of Joe Gibbs Racing, said he intends to have Busch back next year. It's just a question of what company will be on his car.

“We’re still working on sponsorship, and as much interest as there is in our sport, these take a long time," he said. "This one’s taking a little longer than we thought. It’s not for lack of interest. It’s just trying to get everything put together.”

Busch is the only active Cup driver with multiple championships and Alpern implied the delay in locking down a new contract is finding the right sponsor. Busch is a favorite of young children because of the bright, candy-themed paint schemes on his car.

“What we do is get sponsors. I mean, we’ve been doing that for 30 years. We’re in the business,” Alpern said. “I think it’s not a matter of just slapping something on the car. It’s finding a partnership that makes sense. And so we’re just trying to find the right fit.”

The JGR camp also must make plans for Xfinity Series star Ty Gibbs, the grandson of team owner Joe Gibbs. Ty Gibbs has four wins this season and is coming off last Saturday's win at Road America, where he won with a late pass of current Cup champion Kyle Larson.

“We don’t want to push him too fast,” he added. "There are no specific plans beyond this year in reference to a Cup race or whatever. We’re just kind of trying to play out the year and see if he can go win or can compete for an Xfinity championship this year. And he’s got four wins and he’s doing really well.”

Alpern also said he planned for Gibbs to race Xfinity next season and “every intention” of re-signing Busch to be in the No. 18 in Cup. But he noted Carl Edwards blew up JGR's long-term plans when he abruptly retired at the end of the 2017 season.

"Pro sports, look, things happen. Carl Edwards retired on the week of Christmas one year, so trying to speculate what’s going to happen? Things happen. But the plan is we feel confident there’ll be a good partner on that car for next year.

“And, again, the hope is that Kyle Busch will be in it.”

Busch goes back to Atlanta with only one win through the first 18 races and the reconfigured track was tough on him when NASCAR visited in March. Busch was involved in a crash and finished 33rd in an event that raced more like a Daytona or Talladega than a traditional 1.5-mile oval.

Atlanta last winter underwent a repave and increased banking in the turns from 24 to 28 degrees. The track width also now varies from 55 feet to 40 feet.

“It was just as crazy as I expected. It literally got a facelift with a whole new track surface and layout and everything," Busch said. “Back in the spring, it was more like what we expected it to be, like a Daytona or Talladega speedway race. We saw a lot of pack racing with some guys two-wide and maybe three-wide, and saw how wide the track got in the time we had on it.”

William Byron won at Atlanta in March . ... Chase Elliott, Ryan Blaney and Ross Chastain are co-favorites, per FanDuel Sportsbook. ... There have been 13 different winners this season, with Tyler Reddick last Sunday at Road America becoming the fifth first-time Cup winner. The 2003 season had 14 different winners, the modern era record. Five first-time winners in a season was also done in 2001, 2002, 2011 and 2022.