Haas cuts Mick Schumacher and replaces him with Hulkenberg 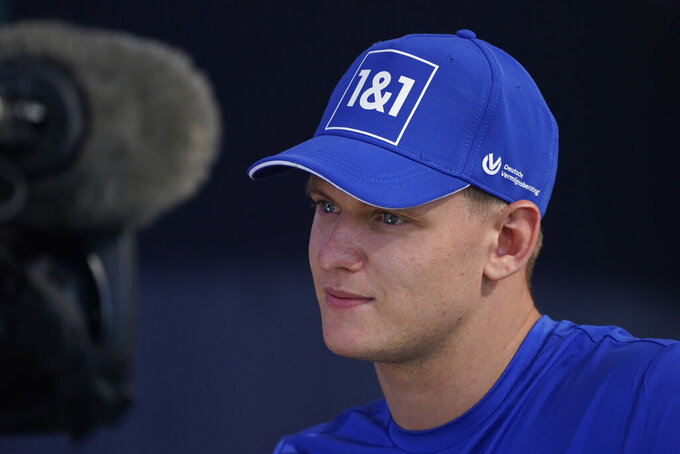 Haas driver Mick Schumacher, of Germany, responds to a question during a news conference before the Formula One U.S. Grand Prix auto race at Circuit of the Americas, Thursday, Oct. 20, 2022, in Austin, Texas. (AP Photo/Darron Cummings)

Mick Schumacher, son of seven-time Formula One champion Michael Schumacher, is out at Haas and Nico Hulkenberg will return to the grid fulltime next season in his place.

“I would like to thank Mick Schumacher for his contribution to the team over the past couple of years,” Haas team principal Günther Steiner said in a statement. “Mick’s pedigree in the junior categories was well known and he has continued to grow and develop as a driver in his time with Haas F1 Team. While choosing to go in separate directions for the future the entire team wishes Mick well for the next steps in his career path and beyond.”

Minutes after the announcement was made, Schumacher tweeted that he was disappointed with the decision but hoped to soon return to Formula 1.

“It was at times bumpy but I steadily improved, learned a lot and now know for sure that I deserve a place in Formula One," Schumacher said. “The subject is anything but closed for me. Setbacks only make you stronger."

The announcement regarding the last undecided seat on F1's 2023 grid was hardly a surprise as Gene Haas told The Associated Press in October that Schumacher needed to score points in the final four races of the season to keep his job.

“Mick’s future is going to be decided by Mick. If he wants to stay with us, he’s got to show us that he can score some more points. That’s what we are waiting for,” Haas told The AP. "I think Mick has got a lot of potential, but you know he costs a fortune and he’s wrecked a lot of cars that have cost us a lot of money that we just don’t have.

In the three races since Haas made clear the job requirements, the 23-year-old German has failed to score any points with a best finish of 13th last week in Brazil. Schumacher missed the second race of the season after a brief hospitalization following a crash in Saudi Arabia, and with 12 points scored this season ranks 17th of the 20 full-time drivers.

In two seasons with Haas, where Schumacher was placed by the Ferrari Driver Academy, Schumacher has yet to live up to the hype set by his father's legacy. He and fellow rookie Nikita Mazepin combined for the worst team on the F1 grid last season, and he's been outrun all year by Kevin Magnussen, who was brought back to the team when Mazepin was fired followed Russia's invasion of Ukraine.

Haas, the only American-owned team on the F1 grid, has a technical alliance with Ferrari and Schumacher's contract with the Driver Academy is up after Sunday's season finale at Abu Dhabi — removing any obligation on Haas to keep Schumacher in the car.

Schumacher could land in a reserve role with Mercedes — a job Australian Daniel Ricciardo is also chasing — and Esteban Ocon had pushed for Schumacher to get the open Alpine seat before it went to Pierre Gasly.

“I don’t know what the status is with Mick and Haas,” Wolff said after the Brazilian Grand Prix. “But I make no secret of the fact that the Schumacher family belongs with us and that we value Mick very highly.”

Four-time F1 champion Sebastian Vettel is retiring after Sunday’s race and Schumacher is out, which put F1 in jeopardy of not having a German driver on the grid next season. But Haas replaced one German with another in Hulkenberg, a veteran of 181 F1 starts.

Hulkenberg last raced a full season in 2019 with Renault, then was a substitute driver for two races in 2020 and another two races this year. He was a fill-in this year for Vettel, who missed the first two races of the season with COVID-19, and Hulkenberg finished 12th in Saudi Arabia.

Hulkenberg, who is 35, scored a pole in his 2010 rookie season but has never had a podium finish in F1.

“I’m very happy to move into a fulltime race seat with Haas F1 Team in 2023,” Hülkenberg said in a team statement. “I feel like I never really left Formula 1. I’m excited to have the opportunity to do what I love the most again and want to thank Gene Haas and Günther Steiner for their trust. “