Conor Daly gets tryout at Portland for 2020 IndyCar seat 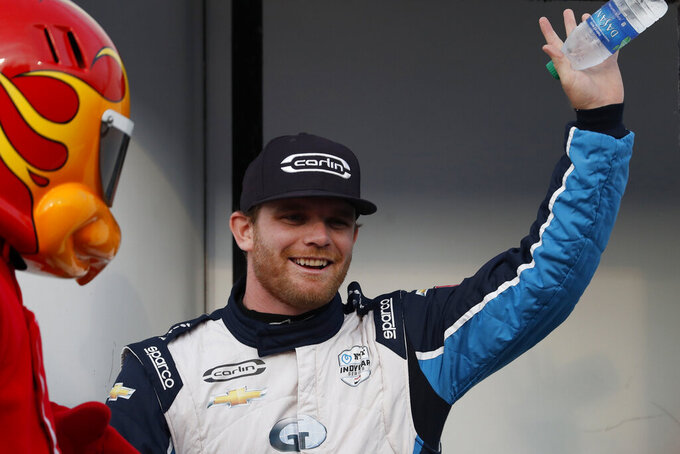 FILE - In this Aug. 24, 2019, file photo, Conor Daly waves before an IndyCar auto race in Madison, Ill. Daly will get a live tryout for a ride next season when he fills in for Marcus Ericcson at Portland International Raceway this week. Daly's late substitution has sparked interest in free agency with drivers jockeying for any open seats in 2020. Daly has been without a full-time IndyCar ride the last two years. (AP Photo/Jeff Roberson, File)

PORTLAND, Oregon (AP) — Conor Daly landed one of the most coveted seats in IndyCar when Arrow Schmidt Peterson called for a substitute driver for Sunday's race at Portland International Raceway.

The opportunity is essentially a live tryout for an expected open seat with the team next year, when Formula One stalwart McLaren comes aboard as a partner. McLaren has been only lukewarm on retaining rookie Marcus Ericcson, and the Swede asked for a leave to return to Formula One this weekend as a reserve driver for Alfa Romeo.

Ericcson choosing not to compete in an IndyCar race to instead sit on the sidelines at F1 suggests he won't be back in the No. 7 next season and maybe not in IndyCar at all. So the competition for that seat is fierce, and Daly got the call this week to race at Portland and perhaps move up on the list of candidates.

James Hinchcliffe is under contract to return to his seat next season, and both McLaren CEO Zak Brown and Arrow Schmidt owner Sam Schmidt have said they want the Canadian back. But the assumption is that the rebranded McLaren organization will have at least one opening and every driver — young, old, with a little bit of sponsorship money — has inquired. Some applicants might get a test with the team but others can only verbally make their case.

Daly? He fell into a dream situation by getting to race all weekend around the 12-turn road course that returned to the IndyCar schedule last season after an 11-year break.

It helped tremendously that Daly, in a substitute driver role for Carlin, led a lap last weekend at Gateway and finished sixth.

"I need to stay on the same trajectory that I'm on now, which is kind of consistent improvement with a group," Daly said. "I think the Carlin situation, they are still a new team and they needed someone essentially to just fulfill a substitute role. I obviously want to do the most that I can with that, and in the end we found ourselves fighting for a win at Gateway and that was the goal — to be a part of a group that can run at the front.

It's been tough going for Daly, a popular American driver from Indianapolis who can't quite get the break he needs in IndyCar. He has had just two full seasons since his 2013 debut, with the rest of his starts as a substitute. He began this year with only the Indianapolis 500 for Andretti Autosport on his schedule, but was phenomenal in a 10th-place finish that led Carlin to call when it needed a replacement.

Daly got four races with Carlin, as well as sponsorship money to get back in the Andretti car for the IndyCar finale next month at Laguna Seca. The choppiness of his schedule, a lack of time to build chemistry with race engineers and not having access to regular time in a simulator or testing admittedly hurts Daly, who turns 29 in December.

The young drivers generating buzz right now — Colton Herta, Santino Ferrucci and Indy Lights points leader Oliver Askew — are almost 10 years younger than Daly. It's left him sometimes wondering if he missed his time to shine in IndyCar. He was often passed over for rides by teams looking for drivers with strong resumes of experience and maturity, and now finds the young kids getting the chances Daly wants.

But since he was unexpectedly dropped from A.J. Foyt's team after one season in 2017 — and he was off filming reality show "The Amazing Race" with Alexander Rossi and unable to give his full attention to a job search — Daly believes he has developed into a steady driver who can win.

"I feel at a much more confident and mature level than I ever have been," Daly said. "That's what I'm trying to be — the guy who can deliver but also win races and potentially, you know, in the right situation, win championships as well."