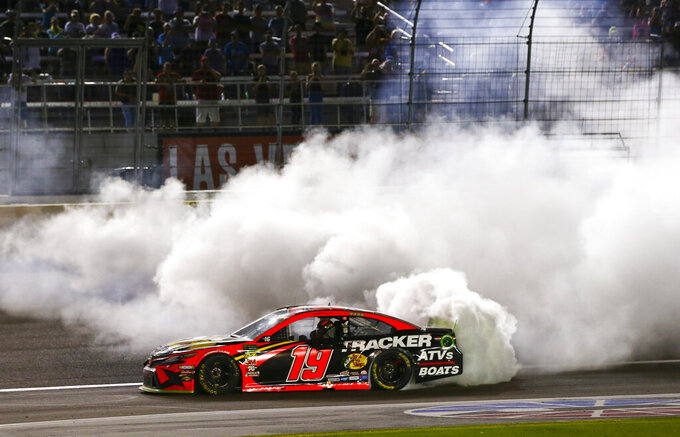 LAS VEGAS (AP) — Martin Truex Jr. and Cole Pearn built a championship-winning team far from NASCAR's hub in North Carolina, using their own approach in making a single-car organization one of the most dominant.

Then Barney Visser shuttered his Colorado-based team and the driver and crew chief were nearly unemployed.

Gibbs pulled them both into Joe Gibbs Racing, Visser's technical partner when he was running Furniture Row Racing in suburban Denver, and the results haven't changed at all. Truex won for the fifth time Sunday in his first season with the Gibbs juggernaut, and the Las Vegas Motor Speedway victory came in NASCAR's opening race of the playoffs.

Truex is now automatically into the second round and rolling toward a spot in the championship race for the third consecutive year. Truex found very little upheaval in moving inside the four-car Gibbs organization, which gave him a lucrative new contract and full access to all the Gibbs assets.

"I think the feeling of just being more comfortable in my environment, being more settled, longer-term contract, not a single car team, I'm not worried about what's going to happen next year. Been through a lot of things in the last couple years really. Just in a comforting spot and excited about this team and what we can do in the next couple years together."

There has been adapting along the way, particularly for Pearn, an outdoors-loving Canadian who had a fulfilling family life in Colorado. The move to Charlotte, North Carolina, has been bittersweet and the summer heat had his kids asking "every day, 'Can we go back where there's snow?'"

But the Gibbs opportunity is too good — all four cars are in the playoffs — and the No. 19 team has not missed a beat since Furniture Row closed after last season's finale.

"Coach and everybody at JGR put a lot of work into getting us there and make a home for us. We easily could have been out of a job," Pearn said. "I miss Denver. I miss Furniture Row. I'll look back on probably the greatest time in my career. It's fun to be here and building a new path at JGR. ... definitely it's kind of crazy that you can go leave a team, you kind of go to the team you've been working with and be able to hit the ground running. Pretty unique opportunity."

The Gibbs group came to Las Vegas as the favorites to win the title with four chances in Truex, the 2017 champion, regular-season champion Kyle Busch, Daytona 500 winner Denny Hamlin and Southern 500 winner Erik Jones. The Truex victory didn't alter JGR's positioning — the four JGR drivers have combined for 14 victories in 27 races — but its three other cars did not fare so well in the playoff opener.

Busch slapped the wall just five laps into the race and fell two laps off the pace while his Toyota was repaired. He worked tirelessly for 400 miles, gained his laps back and seemed headed to a fourth-place finish until he ran into the back of a lapped car. A furious Busch wound up 19th and complained loudly about the drop-off in talent at the back of the Cup field.

Hamlin finished 15th and had no answers as to why his car was strong early in the race then became a handful.

"I really don't have a whole lot of answers right now until we look at the car because I've been doing this a long time, I've never seen a car without damage go from where we were to where we ended up," Hamlin said. "Certainly, we got to diagnose it and see."

Jones had a mechanical problem and finished 36th — dropping him to last in the playoff standings with two races remaining before the bottom four drivers are eliminated.

It tempered Gibbs' excitement over the Truex win and prepared him for critical team meetings before Saturday night's race at Richmond Raceway in Virginia.

"Our meeting (Monday), our technical meeting, will be tough because three of them had a real tough day," Gibbs said. "I think what you need to do is try and figure out, 'OK, what happened? How do you keep it from happening again?' and learn from those tough nights. So many different things can happen to you in motorsports."

But Gibbs still likes where the organization is right now and believes he's still got multiple championship contenders.

"In pro sports, big time sports, if you've got any weakness, it's going to find you," Gibbs said. "I think the key is to try and be as strong as you can all the way across. I think we've worked extremely hard at our race shop. We go to work every day, this is all we do, we try and make sure that we don't leave a weakness. That's hard, you can't really cover everything.

"For any driver or crew chief, these guys, they've got so many years to drive a car, so many chances to win a championship. You don't want to see them miss one. We'll put everything we got into it and see what happens."