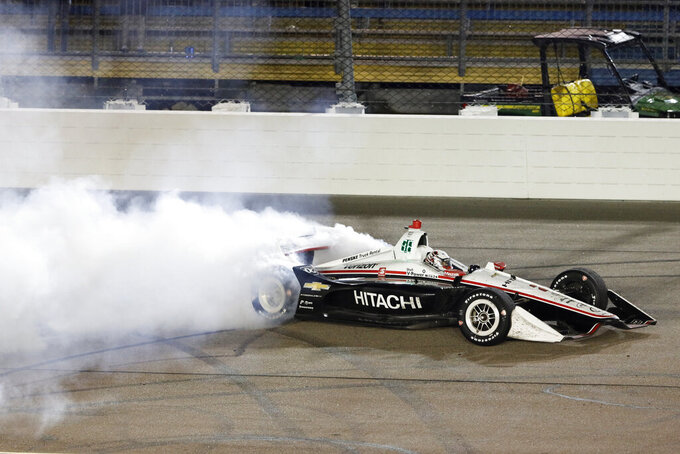 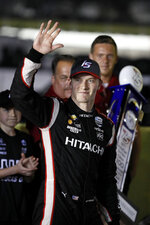 There are no slouches in the IndyCar Series, proven each week by the incredibly close competition across the grid. The intensity has given the series yet another tight championship race in the homestretch of its season.

Josef Newgarden dominated at Iowa to pad a fragile lead that Alexander Rossi had trimmed to just four points. Then came a Newgarden rout Saturday night on the oval at Iowa, which gave him breathing room in what is essentially a four-driver title race.

There's Newgarden, winner of four races this season, and the points leader for all but one week.

He is being relentlessly chased by Rossi, winner of two races to date this season and consistently strategizing on how to claim his first IndyCar title.

Simon Pagenaud won the Indianapolis 500 — a race worth double points — to enter the championship picture and he is hanging tough with the front-runners with three wins on the season. Both Newgarden and Pagenaud are former series champions.

The final contender is reigning series champion Scott Dixon, who can't be counted out even at 98 points behind Newgarden. The five-time series champion could have fallen out of the title picture entirely at Iowa, where his Chip Ganassi Racing team hasn't thrived in recent years. Dixon even went a lap off the pace during the race before adjustments and pit strategy allowed him to make a late charge through the field and close in on Newgarden.

"I'm like, 'Scott? Where the hell did he come from?'" Newgarden said after the race.

The runner-up finish gives Dixon a chance with five races remaining this season. The September finale, a return to Laguna Seca in Monterey, California, after a 15-year absence, is worth double points. Of the drivers in the championship picture, only Dixon has raced the historic speedway in an Indy car.

Up next, though, is Sunday's stop on the road course at Mid-Ohio, where Rossi won last season. Then comes Pocono, where Rossi also won last year to become a serious title contender.

The lesson Rossi learned in unsuccessfully chasing Dixon last season for the championship was to mitigate the damage on his bad days, and he's successfully done that all season with Andretti Autosport. Now he's applying those practices in a contract year in which other teams are certainly interested in snatching the American away from Andretti while trying to keep Newgarden in reach.

Rossi's sixth-place finish at Iowa was his worst in seven races, a stretch that included three runner-ups, including a breathtaking battle with Pagenaud in the closing laps of the Indy 500.

There wasn't much for him to do at Iowa, where Newgarden won for the second time by leading 245 of the 300 laps. The Tennessee native had not been all that pleased with his car after qualifying third, behind both his Team Penske teammates, but felt comfortable enough around the oval to take control of the race.

"You've got to maximize your weekends that you can. There's a lot of (contenders) still in it," Newgarden said. "If you've got a winning car, we try to win. If we have a fourth-place car, try to finish fourth. That's what we've been doing. You're going to have those ups and downs. But it's about who rides it out the most even, I think.

"We'll see where we tally up at the end."