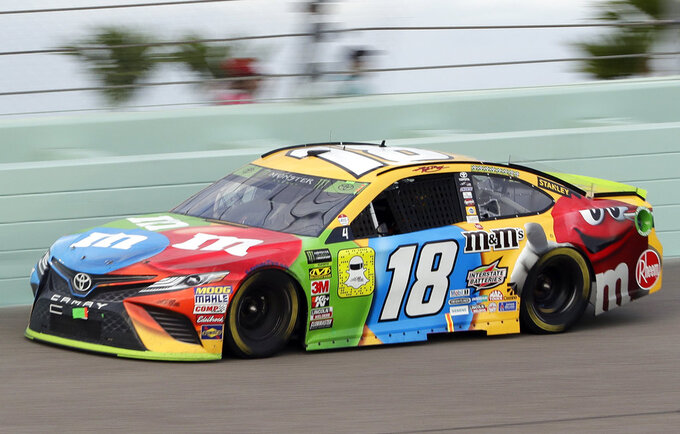 They let the race they needed slip away, and champion Joey Logano pounced.

Busch, Harvick and Martin Truex Jr. comprised NASCAR's "Big Three" this season, but it was a Big 0 for the trio in the Cup finale Sunday at Homestead-Miami Speedway. Harvick, dominant in the No. 4 Ford all year, lagged on the speed charts all weekend. The Joe Gibbs Racing' pit crew flubbed two stops for Busch — the blunders cost him six and four spots off pit road — that denied one of NASCAR's biggest career winners a second title.

"We were so bad tonight on the racetrack and on pit road that nothing was kind of going our way," Busch said. "It was just not all there the way that we needed it to."

Busch's stops for the No. 18 Toyota were the pits.

At the end of the first stage, lug nuts were not properly secured to the right front tire that slowed the stop and cost Busch key track position. On a stop later in the race, the air hose got stuck under the front of the car as the pit crew worked on the left side.

Front tire changer Cam Waugh — wearing a firesuit as green as the M&M'S paint scheme — played a pivotal role in both mistakes. With his firesuit stripped to his waist, Waugh trudged through the garage and apologized to a JGR official back at the hauler. Waugh tossed his gear into a locker and angrily shouted "No!" when asked for comment on the over-the-wall crew's performance.

Gibbs, the Super Bowl and NASCAR champion, was diplomatic about the errors.

"We were just off today. Tough day for us," Gibbs said. "I don't think you ever really know why. I think you've got to study all that. It was kind of small things here that slowed us down. But when we had to have a great pit stop, we had a great pit stop."

Busch's crew did atone late in the race with a flawless stop in the No. 1 pit stall gifted to him when teammate and pole winner Denny Hamlin surrendered the spot.

By then, it was too late, and Busch had nothing left on a late restart. The botched pit stops compounded the team's lack of speed.

"You can always have stops where things don't go your way," Gibbs said. "That's part of life. Those guys turned around and had the stop of the night to give us a chance to maybe win a race. That's just their world."

Harvick, who tied Busch with a series-high eight wins, finished third behind Logano and Truex. Harvick was nailed with a cheating violation in a win at Texas that cost him his automatic berth into the championship race. Harvick made the final round with a stout effort last week at Phoenix and seemed poised to win a title to pair with his 2014 championship. He led 58 laps early in the race — with interim crew chief Tony Gibson calling the shots for suspended crew chief Rodney Childers — but soon saw the sun set on his championship push.

"When it got dark, we just lost the rear grip and couldn't get off the corner and was having trouble turning in the corner," Harvick said. "We just never could get the rear grip back to where we needed to, and I couldn't take off."

Logano did, zipping past Truex late to win his first Cup championship in a season where he was the outlier of the "Big Three."