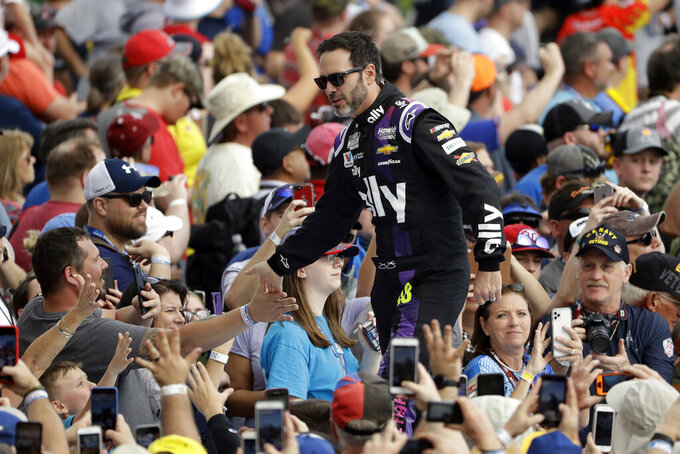 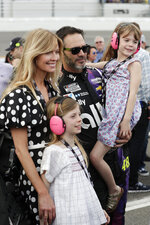 DAYTONA BEACH, Fla. (AP) — Jimmie Johnson's golf cart ride to a meet-and-greet was scrapped Sunday because of tightened security, so he had to walk.

Johnson paused when he saw the 22-foot high flagstand, where twice the checkered flag waved to declare him the Daytona 500 champion, and decided to climb up. Dressed in khakis and a black polo shirt, Johnson surveyed the empty track, where hours later he would make his expected final Daytona 500 start.

Win or lose, Johnson left behind a keepsake on the track: He autographed a white square and added an "LG" for Let's Go on the checkered start/finish line.

Johnson was ready for #OneFinalTime in the Daytona 500. He'll have to wait one more day for the Daytona 500 after rain postponed the race until Monday afternoon.

"I feel really good about it," Johnson said the day before the race. "We've had great speed in our 500 car."

Johnson's No. 48 Chevrolet didn't need speed for him to lead the Daytona 500 -- he was waved to the front of the field during the pace laps to raucous applause from a sold-out Daytona International Speedway.

Johnson, tied with Richard Petty and Dale Earnhardt with seven Cup Series titles, was trying to win his third Daytona 500 in what he called his final full NASCAR season.

Johnson was mobbed as he made his way through the garage from autograph seekers who wanted one more keepsake. He signed a woman's shirt, the bill of baseball caps and other memorabilia before he ducked in front of a row of haulers to avoid the crush.

"I'm here because it's your last Daytona 500. You know that right?" one fan told him.

Johnson was teased by WWE wrestler Sheamus, who asked him how he ate his sandwiches (the unrelated Jimmy John's) in the car. Hootie and the Blowfish lead singer Darius Rucker said he wanted to play the pre-race concert because it was Johnson's final Daytona 500.

"Jimmie Johnson's become a really good friend of mine over the last 15 years or so," Rucker said. "We hang out a lot and talk a lot. I'd love to see Jimmie go out and take this race."

Johnson needed to walk at Daytona because President Donald Trump's arrival wreaked havoc with schedules and transportation. He had never actually walked across the track infield that's emblazoned with “DAYTONA” on the grass and took a selfie with hundreds of fans once he got to the suite.

The 44-year-old Johnson won five straight championships from 2006 through 2010, and his 83 career victories are tied with Cale Yarborough for sixth all time. But he's mired in a 95-race losing streak spanning more than two years, had two crew chief changes last season and wasn't a serious favorite to win Sunday.