Wallace says his frustrations result from his passion to win 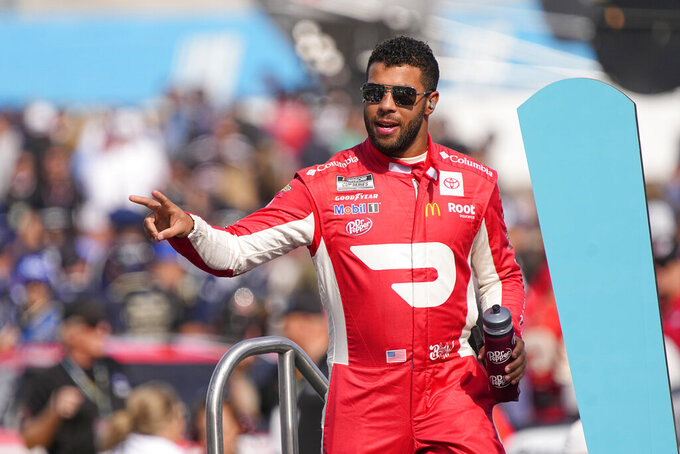 FILE - NASCAR Cup Series driver Bubba Wallace (23) during the NASCAR Cup Series auto race on Sunday, Nov. 7, 2021, in Avondale, Ariz. Bubba Wallace says the pointed criticism he made toward members of his crew last weekend were a result of his passion to win and shouldn’t harm his relationship with them. “We have a team capable of winning, cars capable of winning,” Wallace said as he prepared for the Cup Series race at Road America on Sunday, July 3, 2022. (AP Photo/Rick Scuteri, File)

ELKHART LAKE, Wis. (AP) — Bubba Wallace says the pointed criticism he made toward members of his crew last weekend were a result of his passion to win and shouldn’t harm his relationship with them.

That passion was on display last weekend at Nashville.

Wallace was in sixth place Sunday when a loose wheel during a pit stop sent him toward the back of the pack and caused him to curse at his crew. The issue caused him to restart in 31st place before he eventually finished 12th.

The 23XI Racing driver was eager to put the incident in the past Saturday. He said one of his passions was “making it feel like we’re one team and family.”

Wallace will be starting in the 25th position Sunday as the Cup Series comes to Road America for the second straight Fourth of July weekend. Points leader Chase Elliott won at Road America last year and has the pole position this time.

Wallace said his crew members understand the types of comments that can be made in the heat of competition. He said he has a great relationship with crew chief Bootie Barker, who tried to calm him down in Nashville.

“The team still has a great relationship,” Wallace said. “Not everybody’s going to be happy in a sport like this and a business like this. Just got to work to do your best. I’ll do better and be better.”

Wallace had his second runner-up finish in the Daytona 500 this year but has only one other top-10 result and is 24th in the points standings. The Nashville situation wasn’t the first time this season he’s been hindered by a loose wheel.

He was asked Saturday if he had any regrets about his Sunday comments.

“I don’t really have much regrets in life,” Wallace said. “I said what I said. If I say I’m sorry, is that going to make anything better? People are still (ticked). It is what it is. Move on. I’ve moved on.”

NASCAR’s premier series came to Road America for the first time since 1956 last year as part of the schedule’s renewed emphasis on road courses. This marks the second straight summer that the Cup Series has been here for the Fourth of July weekend.

But there are no guarantees on whether this will be a long-term marriage. NASCAR hasn’t yet announced whether the Cup Series will return to Road America next year.

“We hope to be a part of it, but ultimately the ball’s in their court,” Road America president/general manager Mike Kertscher said.

Road America, which opened in 1955 and bills itself as “America’s national park of speed,” is located on 640 acres about halfway between Milwaukee and Green Bay. The course is surrounded by about 1,600 campsites and has a sprawling layout that allows fans to walk around and see the race from various vantage points.

Although most drivers didn’t offer an opinion on whether they believed Road America should become an annual Fourth of July stop for the Cup series, they spoke about how much they liked having this site included in the schedule.

“I don’t know how long NASCAR is planning on coming here on this weekend, but I feel like it’s been a really nice fit for us,” Elliott said. “The people around here have accepted us really with open arms and have brought a lot of energy.”

KING OF THE ROAD

Elliott won at Road America last year despite starting out 34th. He has the pole for his title defense as he attempts to build on his victory last weekend on Nashville’s concrete oval track.

Seven of Elliott’s 15 career victories have come on road courses. He won at Road America last year despite starting 34th.

Elliott enters Sunday with a 30-point lead over Ross Chastain in the standings. … The list of spectators at Road America this weekend includes former Formula One driver Daniil Kvyat, who hasn’t been able to race this year on the European circuit because of the ban on Russian drivers since Russia’s invasion of Ukraine. … This is the third road-course Cup Series race of the season. Chastain won at Circuit of the Americas and Daniel Suarez finished first at Sonoma. … Road America’s course is 4.048 miles long and features 14 turns. Sunday’s race includes 62 laps and has a distance of 250.98 miles.